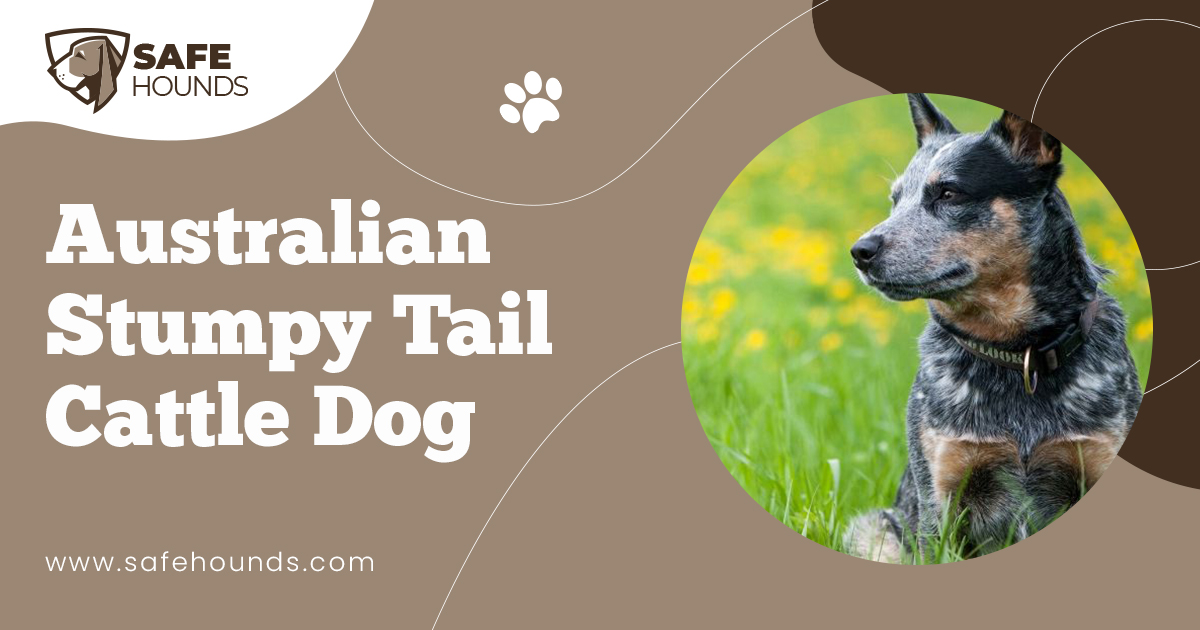 The Australian Stumpy Tail Cattle Dog is a medium sized dog that originated in Australia. This dog is also known as Stumpy Tail, Stumpy and Heeler. Originally breed to herd cattle in the mid 1800s, the dog is considered to be a fairly rare today as they are seldom kept as pets. The Australian Stumpy Tail Cattle Dog however is well established in Australia where the dog is utilized to keep livestock in line. The Stumpy Tail is barely 20 inches in height, really quite a small dog if compared to the cattle it is herding. But a Stumpy has this remarkable ability to trick animals several times bigger that its size to move the way he (the dog) wants. This is done by nipping at the legs of the cattle without breaking the skin.

A very distinct feature of the Australian Stumpy Tail Cattle Dog is the bob tail that is natural and not surgically docked. Docking tail is a custom done in Britain centuries ago. A farmer with a dock tailed dog is exempted from paying taxes on the dog. This custom caused a lot of dogs to be mutilated and even if the system was abolished in 1796, the custom has survived. Up to this day docking is done especially in sporting dogs.

The McNab breed in United States bears a strong resemblance to the Australian Stumpy Tail Cattle Dog. Other breeds have similar appearance to the Stumpy. The Australian Cattle Dog however is the closest in appearance, at first glance you would think that the dog is a Stumpy. On closer inspection you will notice that a Stumpy Tails body is square given that the length is equal to the height measured at the withers while an Australian Cattle Dog has a slightly longer body. Also a Stumpys ears are widely apart and set higher on the dogs head. Aside from the stumpy tail a more noticeable difference is the fact that a Stumpy does not have tan patches.

The Australian Stumpy Tail Cattle Dog is the first pure breed dog developed in Australia. The outstanding working qualities as an all rounder make the dog a most prized companion and friend of the Australian farmers and graziers.

The Stumpy tail is an active and highly energetic working dog, one that can continue working tirelessly for hours in the harsh terrain of the great outback and even under extremely harsh weather conditions. The dog has a balanced muscular body whose length is equal to the height thus giving the dog a square-like appearance. The chest is deep, ribs are well sprung and the forelegs are straight. Hind legs are strong and muscular. The dog has a level top line that gradually slopes at the rump.

The head is proportionate to the body. The widely spaced ears have wide base and pointed tips. The muzzle tapers to a black nose. The dark brown oval shaped eyes have an intelligent, alert and suspicious expression. The undocked 4 inches tail is a distinct feature of the breed. This short tail is uncommon in most dogs and this is where the breed got its name. The tail is set on high but it is not carried above the level of the dogs back.

A Stumpy Tail had double coats – an outer coat that is straight and moderately short. The outer coat has a slightly harsh texture. The undercoat is thick and soft. The feet, legs and head are covered with short hair though longer hair covers the neck forming a ruff. Coat color can be blue speckled or red speckled. Red speckle coated dogs may or may have red markings on the head. Blue speckled dogs can have black markings.

An Australian Stumpy Tail Cattle Dog is first and foremost an energetic and untiring working dog. These dogs love to be in open pastures, under any kind of weather conditions. Unlike their cousins the Australian Cattle Dog that would try to find a shade and rest for a while, the Stumpy dogs would continue working under the relentless heat of the sun. These dogs can cover 20 kilometers a day without stopping to rest.

No one can doubt the working ability of a Stumpy. These dogs can be trained and developed into wonderful pets. These are loyal and brave dogs that will be very attentive to the masters commands. They are good with children especially if raised with the kids since puppyhood. Because the dog is highly energetic, the children will have an indefatigable playmate.

These dogs however are intelligent and would need and demand constant attention from the members of the human family. Being a farm dog, a Stumpy would need open pastures where it can run unrestricted. The dog can adapt to living in a suburban area as long as it is provided with plenty of exercise to channel its excess energy.

A Stumpy Tail is a relatively easy dog to care for. The coat is short and weather resistant. Occasional brushing with a bristle brush would be enough to maintain its tiptop condition. A Stumpy need not be bathed very often as it would remove the natural oils that weather proofs the coat. However, the dog should be inspected for external parasites.

Australia is a vast of area that includes dessert, plains and undulating land formations that is covered by scrub and at times by snow. Large cattle and sheep stations cover thousand of hectares of land on these harsh and remote areas. British immigrants to the colony brought with them their working dogs. However, these dogs were accustomed to working with tamed cattle and sheep in short distances and easy terrain. These dogs that were brought from England can not cope with the harsh terrain and climate not to mention working with undomesticated cattle and sheep. The need for a working dog that can cope with the undomesticated cattle, endure the extreme temperatures, the lack of water and food as well as the rough terrain paved the way for the development of the Stumpy Tail Cattle Dog.

The Australian Stumpy Tail Cattle Dog is deemed to be the oldest breed of Australian working dog. Likewise, the breed is believed to be the first purebreed developed in Australia. The Stumpy Tail was the result of mating a Dingo with a Smithfield. Timmins, a drover from Bathurst, New South Wales had undertaken the crossing of the Dingo with the Smithfield in 1830. The Dingo is Australias native dog that has adapted to the harsh terrain and climate for more than a thousand years. The Smithfield is a working dog that was brought from England. This is a heavy dog with a square appearance and a naturally bobbed tail. The mating produced a progeny of red and bobtailed dogs. These dogs were called the Timmins Biters. These are good workers but possess the habit of fierce and hard biting. Naturally, this will not do as wounding the cattle or the sheep would reduce its market value. The Smooth Coated Collie was introduced to soften the personality of the dog.

There is another theory to the origin of the Stumpy tail. It was believed that Thomas Simpson Hall was the original developer of the breed when he mated his Northern English herding dogs with Australias indigenous Dingo. The dogs that resulted were known as Halls Heelers.

The Stumpy Tail almost became extinct in 1920 if not for the dedicated continued breeding of a family in Queensland. For some time dogs owned by this family were the only registered dogs in Australia until the Australian National Kennel Club have undertaken the revival of the breed in 1988. Dogs that resemble a Stumpy were graded. Grade A dogs can be mated and the litter can have a pedigree. The grading scheme was closed in 2006 but the number of registered dog has enormously increased. The breed is now back on its feet, an indefatigable working dog and a loyal affectionate house pet.