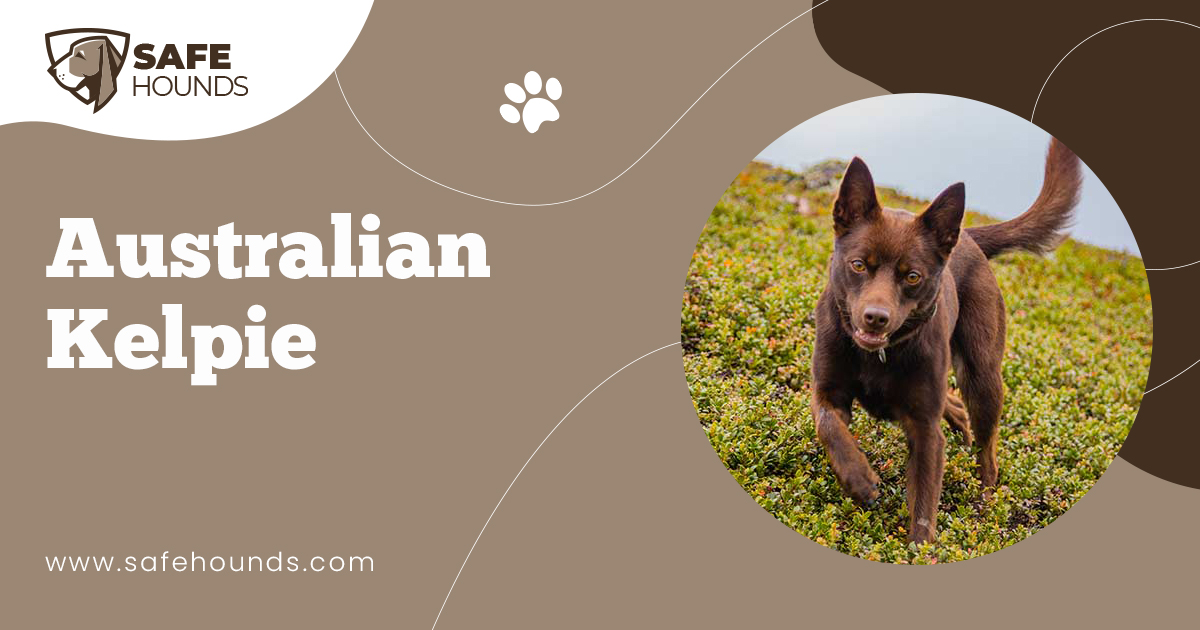 Who would ever be amazed at watching a running dog? No one, Im sure. But a dog running and walking at the backs of sheep would be a truly amazing and wonderful sight. The dog is an Australian Kelpie and walking at the back of sheep is its signature move. An Australian kelpie is a medium sized dog that comes in a variety of colors. There are two varieties of Australian Kelpie – the working Kelpie and the Show Kelpie.

A Show Kelpie is chosen for its appearance. These dogs excel in agility and conformation shows. Show Kelpies are generally shorter and heavier than their working counterpart. They come in solid colors of black, brown, red, fawn, chocolate. Some would have black and tan or red and tan coats. Riley, a famous Australian Kelpie, jumped 2.9 meters at the Kelpie Festival in Casterton Victoria thus setting the world record for dog jumping. Breeding establishments for Show Kelpies are called kennels. Breeders of Show Kelpies can not mate their dogs with Working Kelpies. For a Kelpie to be shown it has to have recognized Show Kelpie bloodlines.

A Working Kelpie is dubbed as the backbone of Australia. The dog has proven its capacity to muster livestock without being commanded or guided. These dogs are breed in establishments called studs. Unlike Show Kelpies that are chosen for their appearance, Working Kelpies are chosen for their natural working ability. One efficient Working Kelpie is equal to several hands at mustering time. Farmers and graziers depend on this dog to drive cattle, sheep, goats, pigs and any other livestock without any supervision. This dog will instinctively know when to block and when to drive the livestock, would even jump at the back of the sheep to get to the cause of the jam the easiest and the fastest way.

Australian Kelpies may be developed for a specific purpose – as show dogs and as a muster or a drover. However these are versatile dogs that can excel in dog sports, in bomb and narcotics detection. Australian Kelpies have shown gentleness to children and to people with disabilities. These dogs have evolved into caring therapy and guide dogs. And most of all, these dogs have developed into affectionate and protective house pets.

Australian Kelpies are medium sized dogs whose muscular and compact bodies are covered with an undercoat that is thick, soft and short and a weatherproof outer coat that is moderately short, straight, and rough and lies flat to the body of the dog. Colors can be black and red, fawn, chocolate and blue. Some have tan or red markings. Others are solidly colored. Short coat covers the head, ears and legs of the dog. Longer hair on the neck gives the dog a ruff.

The widely spaced almond shaped eyes of an Australian Kelpie are very expressive. Eye colors would range from shades of brown and tawny gold. Eye color harmonizes with the coloring of the coat. It is believed that the Australian Kelpie hypnotizes the cattle into doing what the dog wants with its expressive eyes. The ears have a strong base and a pointed tip. These pricked ears are widely spaced and inclined outwards. The tail is medium length and low set.

An Australian Kelpie has a compact and well muscled body, a broad chest, and firm well developed limbs. This is a strong, well conditioned dog with lithe, smooth and effortless movements that shows its capability to work tirelessly for hours. An Australian Kelpie can walk and run for 40 miles a day mustering cattle and sheep.

Australian Kelpies are dogs that live to work. These dogs would be bored to death if allowed to go a day without working. Apart from doing physical activities, these dogs would love to have constant mental stimulation. This is why an Australian Kelpie is a very efficient cattle drover. This dog can do the work of 6 men, driving thousands of sheep from the open country pastures to the pen and to the truck. These dogs are easy to train and would know instinctively what has to be done to solve an existing problem. This includes nipping at the heels of the livestock and taking the shortest route by jumping and running on the backs of the flock to get to where the problem is.

Some people believed that an Australian Kelpie would not be a suitable house pet. The dog would prefer to live outside, to be in an open space where it can do and see different things. However, this notion was proven wrong. The Australian Kelpie is a versatile dog. The dog is proven to be devoted to the master, even good with kids. Although it has a friendly personality the dog would protect the family and the property from intruders.

These are very independent minded dogs. An owner must be active, firm, and confident and must be able to show the dog who is the boss. Being working dogs, they will require a large space where they can vent their excess energies as well as mental stimulation to keep their minds busy. Because the dog is used to herding and mustering livestock it will muster kids, bikers, joggers and other pets by nipping at their heels.

The Australian Kelpie is relatively easy to care for. The short coat needs very little maintenance apart from brushing once every week or so. This dog though is a heavy shedder. The coat may be short but during shedding time, dog hair would fill your hand when you pet the dog, would cling to your clothes and to your furniture. An Australian Kelpie sheds twice a year and during this time it is advisable to regularly brush the dog to accelerate the shedding process.

Australian Kelpies have descended from the Collies, the black dogs that were imported to Australia during the 1800s. These imported dogs were bred with other dogs with the objective of developing a dog that can be used by the farmers and the graziers to muster and drove the livestock with the least supervision. This theory was refuted by the fact that Collies were brought to Australia only in 1901 when the Australian Kelpie breed is already established.

Some people believe that the Kelpies originated from the Dingos. This is due to the fact that Kelpies and dingos have very similar coloring and conformation. Dingos are sheep killers and people during those times were prohibited from keeping Dingos as pets. Because of this, people keeping dingos were forced to register their pets as kelpies, mating with the real kelpies would then be inevitable.

However it was documented that Australian Kelpie really originated from the three pairs of working Collies imported to Australia. The first was imported in 1860 by Jack Gleeson. He bought a female black and tan puppy from a litter on Warrock Station owned by George Robertson. The pup was named Kelpie from a Celtic folklore. This became the foundation female. A black dog named Moss imported from Scotland was given to Jack Gleeson by a friend. Moss was mated with Kelpie. The mating was successful and a line of dogs were produced.

Brutus and Jenny, a pair of black and tan dogs were imported from Scotland by Allen and Elliot of Geraldra Station. From the litter a black and tan pup named Cesar was given to John Rich whose property adjoins the Gleasons. Kelpie was mated to Cesar and to Moss numerous times producing litter where the present day Kelpies originated.