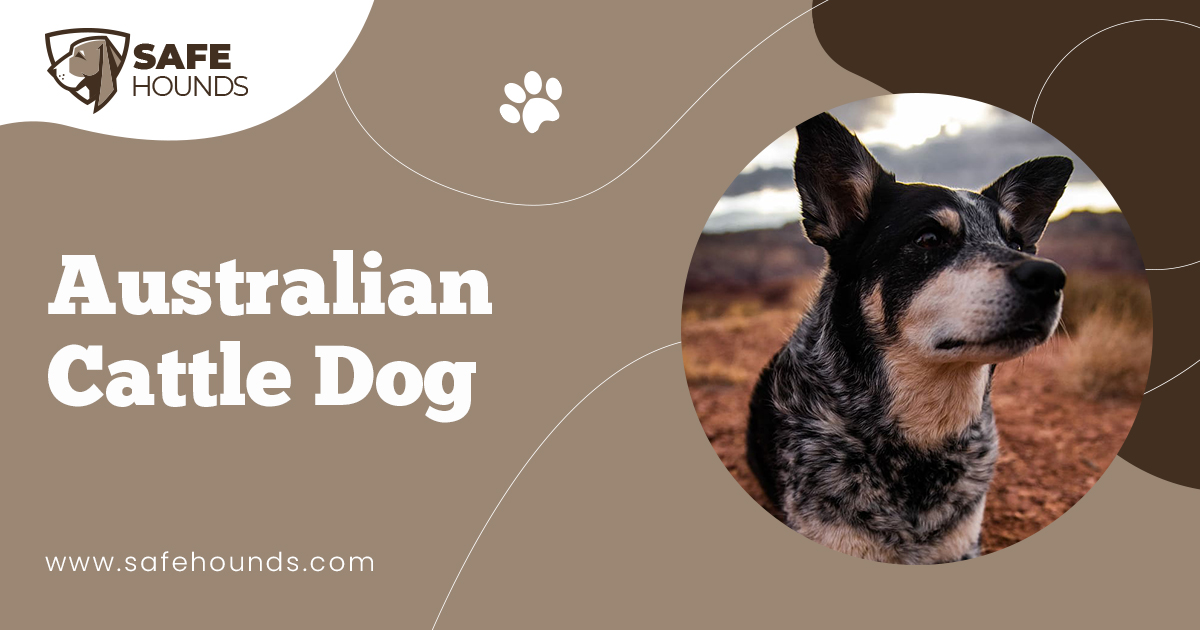 You may know the Australian Cattle Dog by a variety of names that includes the Blue Heeler, Red Heeler, Halls Heeler, and the Queensland Heeler.

Throughout Australia, you will see this breed controlling cattle. They are hard working dogs that are muscular, powerful and agile. They have energy to burn, are very intelligent, and have an independent attitude.

This unique breed is a medium sized dog, which is considered to be very athletic, balanced, and a great cattle herder. They are easy to train, but can nip while in play, as this is the way in which they herd cattle, by nipping at their heels. They are so conditioned to nipping it is possible they will lightly nip at their masters.

They tend to bond rather quickly to older dogs or to their master which ever seems to be more of a leader. The Australia Cattle Dog needs to know the order of command in the family environment especially when other dogs can be more dominant that the master. This breed works well with other dogs in the farm setting such as Border Collies and Kelpies. However, this does not mean you will be totally free of some of a few scraps until the order of command is established between the dogs.

The most distinguishing characteristics are the color of their coat, which is usually blue, or in some cases red speckled. They have a double coat with the outer coat lying flat and straight with a short undercoat. The outer coat is rain resisting. The coat is a bit longer on the legs and neck. The average length of hair is around 1 to 1%frac12, inches.

The blue colored Australian Cattle Dogs may have black, blue, or tan markings on the head, forelegs the tan can be midway up the legs and extend as far as to the front of the chest, throat and on the jaw. Tan is also accepted on the inside of the back legs and inside of the thighs. A tan undercoat is often seen and is accepted if it is not seen through the blue coat. In cases of mottling the colors of black, gray, and white hairs are seen over the entire body. The red colored coat may have a white frosting, however, the undercoat should also be red unlike that of the blue Australian Cattle Dog.

The Australian Cattle Dog has a wide head this is a bit curved between his ears with a definite stop. His dark brown eyes are oval and of a medium size which do not bulge or sink into the head.

Ears of the Australian Cattle Dog are of medium size. They should be pricked up and pointed. They are situated wide apart pointing just a bit outwards.

Tails are normally docked in the United States, which is not the practice in Australia.

The Australian Cattle Dog is full of life and energetic. They love all kinds of attention and playful activity including learning all kinds of tricks. They do tend to tire quickly with the same repetitive training and need extra stimulation. When this breed becomes bored, they tend to invent their own fun activities, which can be destructive at times.

Cautious is the first think you think of when you see an Australian Cattle Dog, he is wary of strangers which makes them great as guard dogs. As the dog ages so does his wariness. They love to herd animals and may try to herd other animals in the family such as other dogs, cats, chickens, or other smaller pets. He uses a nipping effect at the heels of his charge to put them in their place, so around small children he should be watched.

He loves to play with all kinds of chew toys and does not tire like other breeds. He will chew and chew even on a stick until nothing is left before going off looking for another adventure.

Once in a family the Australian Cattle Dog is very loyal and obedient. They will more than likely choose one family member to bond with more than the others and become more of a one-person dog.

He does have an aggressive behavior but only when it comes to other dogs. He wishes to be the dominant dog in this terrain.

The Australian Cattle does is an active dog and needs a lot of physical activity. When they become bored they can become destructive, therefore, they need do lots of training. He prefers short training and very diverse training with plenty of change. A game of Frisbee is one of his favorite pastimes. Without enough activity, they become bored and destructive.

They do not enjoy living in an apartment, however, if they have a large yard to romp and play in they will do fine.

Grooming is not a problem as their short hair is weather resistant. They will need to be combed or bathed when it is necessary. They do shed their coat twice per year during shedding season.

When you search through history, you may not find the Australian Cattle Dog but you will find the Blue Heeler. The first time the breed is mentioned as a distinct breed was in 1897. As it was recorded, the Smithfields used cattle dogs for herding cattle. The first dogs were very noisy, therefore, they were bred with the Dingo. These were called Timmins Biters. They were quieter but still hard to handle.

In 1840, Thomas Hall bred Blue Smooth Highland Collies with dingoes and thus the Halls Heeler came to be. This breed was muscular and a bit heavier. The sandy color we see today originally came from the Dingo.

In the 1870s, Fred Davis bred the Halls Heeler with Bull Terriers to develop a more aggressive breed. This strain was commonly seen as guard or sporting dogs all the way into the early twentieth century.

During the late ninetieth and early twentieth century, the cattle dog was bred with the Dalmatian. This brought forth the carriage dog that would run along side the horses. This dog could work with horses while herding instead of running away from the horse. The crossbreeding with the Dalmatian is what has given the Australian Cattle Dog we know today the spotted coloration we see in the blue coat.

As far as anyone can tell the Australian Cattle Dog we know is the development of crossbreeding a mix of collie imports from Scotland and wild Australian Dingos, however, more breeds were added to the pot which include the Australian Kelpie, Dalmatian, and Bull Terrier.

In 1980, the American Kennel Club recognized the Australian Cattle Dog.

A few famous Australian Cattle dogs you may have seen on the big screen include Mad Dog and Dingo in the Sundowners, the dog in Mad Max 2: The Road Warrior, the dog in The Blob, Zip in Last of the Dogmen, a few dogs in Brokeback Mountain, and the mean dog in Babe.