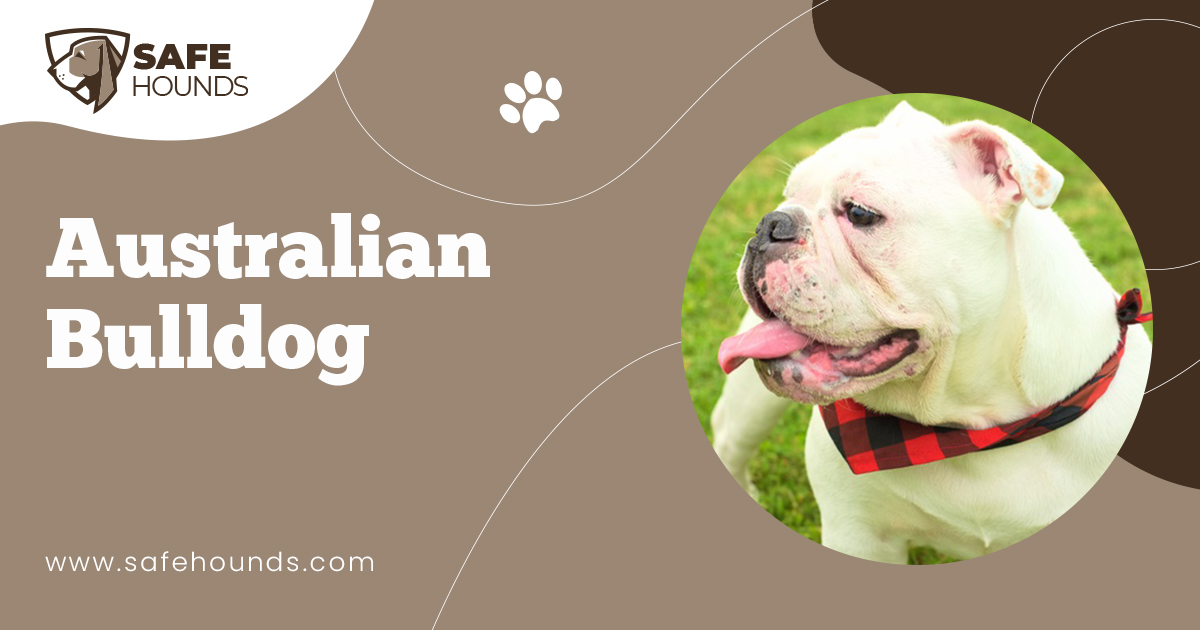 The Australian Bulldog is medium sized thickset breed. A male dog stands from 40 – 45 cm and weighs from 28 to 35 kg. Females measure from 40 to 48 cm at the withers and weighs from 25 to 35 kg. An Australian Bulldog is easily recognized as a bulldog because of is massive head with the typical bulldog sourmug expression. This breed has a large very strong head that looks like a box on a box. The head and the large skull are proportionate to the body. The broad muzzle that turns up slightly is cut off giving the muzzle a square shape. The short muzzle does not interfere with the breathing but it does give the dog a short faced appearance. An Australian Bulldog has a wide square shaped jaw and a slightly overshot bite. The nose that has well opened nostrils is covered with loose skin that forms two or three folds. Large eyes are set wide apart. Dark brown is the desired eye color. Small to moderately sized ears are well spaced apart. Rose or button ears are preferred. An Australian Bulldogs moderately long neck is covered with loose skin that forms dewlaps. The short brick shaped body gives the dog a compact carriage. The chest is broad, the brisket is well let down. Well muscled forearms are straight and set wide apart. Hind quarters are strong and muscular. Cat like feet have thickly padded and rounded toes. The topline is level with the tail that is thick at the root. An Australian Bulldog can have a short or a long straight tail. Screw tails are also acceptable.

The short coat of an Australian Bulldog is dense and smooth. The coat is beautifully colored with apricot, red, fawn, white, mahogany and a variety of brindle shades. The dogs coat can be red brindle, fawn brindle, mahogany brindle, silver brindle and black brindle. A white base coat can also have colored patches.

The Australian Bulldog was specifically bred to be a companion. The Australian Bulldog is actually a loving and loyal pet that enjoys being with its people. This good natured breed has a stable temperament. The dog is gentle with children. This breed will be more than happy to relax and lie down at the feet of the master but it would also be eager to play games with the children. This is a friendly dog friendly to strangers and to other animals. An Australian Bulldog would not be a good watchdog. Because of its friendly nature, the dog will meet a burglar with an enthusiastically wagging tail. This breed tolerates other dogs and smaller pet but an Australian Bulldog would also show an aggressive nature if confronted by dominant dogs. This breed would do well in an apartment as they are generally inactive indoors. These dogs are not very energetic and would be a good choice a less active person.

Low maintenance is one of the plus factors in owning an Australian Bulldog. This breeds smooth short coat is easy to maintain. No professional grooming will be necessary for this breed. The Australian Bulldog is an average shedder. A firm bristled brushed used two to three times every week would be enough to maintain the good condition of the hair. Bathing should be on a necessary basis only. However, the folds on the skin of the dog must be wiped clean everyday to remove accumulated moisture that can cause infection. This breed is sensitive to heat as well. The dog must not be kept for long in the hot Australian sun.

Bulldogs are stocky broad shouldered dogs with large heads. These dogs are noted for their sourmug expressions. England has the British and English Bulldogs, US has the American Bulldog and France has the French Bulldogs as well. In the early 1990s some Australians have started the development of a dog breed that is to be Australias version of the dog breed with the sourmug expression. What was started though was not a formal breeding program but a kind of adventure. Mrs. Pip Nobes crossed a British Bulldog with her husbands pig hunting bitch out of curiosity never knowing that this will be the start of the Nobes Australian Bulldog (Wingara Line) breeding program. Another breeding line is the JAG line started by Noel and Tina Green. These two breeding programs have the objective of creating a dog breed with the physical appearance of the British Bulldog but without the genetic health problems of the breed. The developing breed was initially given the name Aussie Bulldog by Noel and Tina Green. These two breeding programs were started separately and both have separate registries. In the registry books of the Nobes line, it was recorded that the dogs have descended from mixed breed bitches. The mixed breed bitches aside from being predominantly British Bulldogs are Boxers, English Bull Terriers and breeds of mastiffs. After years of breeding the two lines merged and coordinated their efforts to create a breed of bulldog that is more suited to Australian conditions. The breed that will be developed has to have the strength and endurance not to mention the ideal size necessary in the performance of the tasks that will be set out for them.

The Australians first heard about the new breed when the Aussie Bulldog received national publicity when the breeding programs were feature in Burkes Backyard, an Australian lifestyle program that is aired both in radio and TV. The national publicity generated overwhelming interest for the breed. Demand for the breed that is now called Australian Bulldog grew. The Australian Bulldog Society (ABS) was founded by Pip Nobes in October 2004. This properly constituted organization aims for the recognition of the Australian bulldog by the Australian National Kennel Council. The United Aussie Bulldog Association was formed in 2003. This registry is run by Noel and Tina Green. One of the aims of this organization is to unite all breeding lines of the Australian Bulldog. Because of the interest for the new breed other breeders have joined in. As the breed is not yet recognized by the ANKC, all dogs have to be issued a breed certificate by Pip Nobes, Tina Green or Louise Causchi to document the ancestry. This is necessary for the future documentation of the dog.