At what age can a male dog breed?

Home / Blog / At what age can a male dog breed? 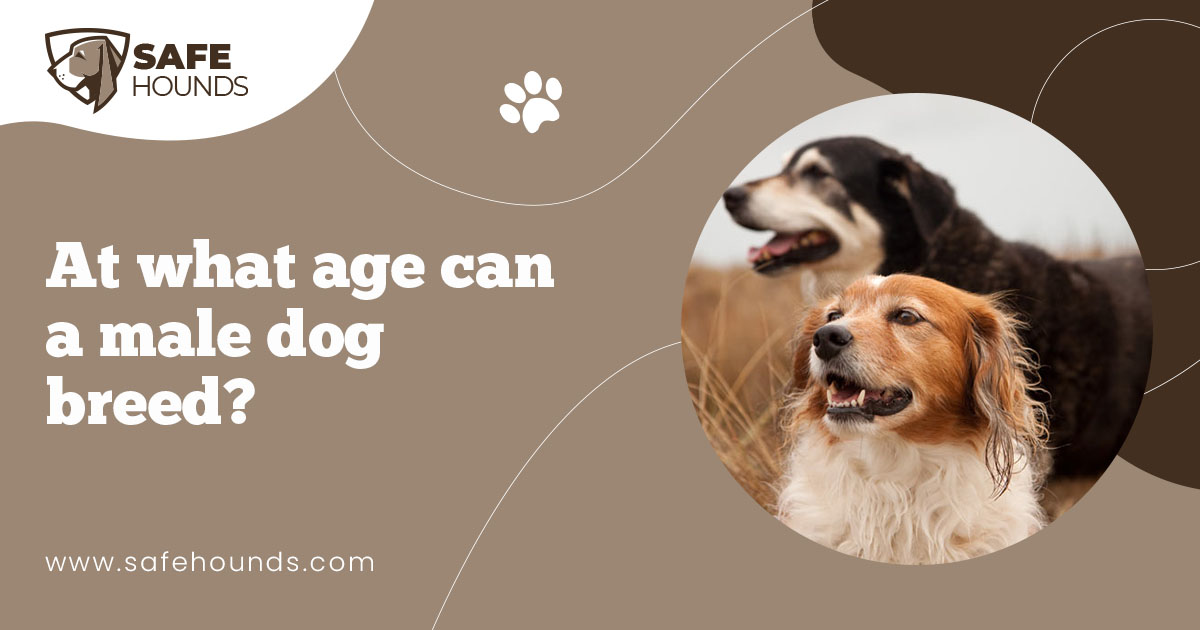 At what age can a male dog breed?

Male dogs, like females, attain puberty at different ages. Smaller breeds normally become fertile at a younger age, than larger breeds. Across all breeds, the average age for being able to mate is 6 – 12 months. Thus most male dogs will be fertile by the time they are 1 year old.

Keep in mind that these are averages. Some dogs may be ready to mate at ages earlier than 6 months, while others may not be ready to reproduce even though their first birthday has long since passed.

If you have a smaller dog breed, chances are he may be able to impregnate a female dog as young as 4 – 5 months old. While a larger breed may sometimes not be able to breed until it is 2 years old.

Here are some examples of when, on average, different breeds reach sexual maturity.

Once your dog reaches puberty, he will start to produce sperm, his interest in females in heat will start to show and he will develop other sexual characteristics that all allow him to mate with a female dog.

What is the minimum recommended age for breeding a male dog?

While your dog may be able to become a stud, it does not mean that it is wise to immediately start breeding him.

Recommendations for the minimum age of breeding a male dog generally ranges from 1 to 2 years.

Why not simply breed him as soon as he becomes fertile, you might ask.

While he may be fertile. a young dog has yet to fully develop and as such may not reach full sexual maturity until the 12 – 15 months of age. Again, this depends on the breed, with smaller breeds often reaching this stage as earlier and some larger breeds not being fully sexually developed until much later.

What about my older dog. Can he be bred? Like humans, male dogs stay fertile from puberty until the end of their lives.

However, that does not mean that it is wise to breed an older dog. Reason being that in old age, health issues may appear that makes it inadvisable to complete the mating process.

From the AKC, we find two reasons to hold back on breeding older dogs.

First, as a dog grows older, he will become less fertile and unable to reliably sire puppies.

Second, as a dog has passed his prime, the litters he produces are often genetically weaker than what he produced at a younger age. This could mean that the puppies develop weaker traits like the coat or markings, are slower and potentially more prone to illness.

Note that this may not always be the case. There are occasions when older dogs successfully sire good quality litters.

Tell me, what is the best time to breed my male dog?

So far we can generally divide breeding a male dog into 3 phases.

Before the dog has fully sexually matured, it is not optimal to let him mate. Once he reaches old age, breeding may once again become inadvisable.

Therefore, the best age is in between. When he is fully sexually mature and his health is still in excellent condition. This is often somewhere between 18 – 24 months and 7-9 years of age.

For purebreds, kennel clubs often have restrictions on the minimum age of the stud as well as health requirements for the resulting litter to be registered.

Can male dogs go into heat?

They may, however, display signs the resemble a female in heat.

Most of the time this is a response to nearby female dogs in heat. He simply cant help himself, being attracted to all of those cute females around him. Being who he is, he will likely display his natural sexual instincts, making him harder to control than normal.

Sometimes, though, there can be physical signs, such as bleeding. In this case, he should be taken to the local veterinarian.

How do I know that my male dog is fertile?

A veterinarian can asses if a male is fertile through a range of methods ranging from a general examination to specialised fertility tests.

Besides having your dog tested, there are things you can do to get a good idea of whether or not your dog is fertile.

1) Make sure he has reached puberty.If he is too young, he wont be sexually mature and therefore unable to sire puppies.

2) Make sure he is generally healthy.Some health problems may interfere with his fertility.

Among these are issues of:

3) Is he showing signs of interest in females who are in heat?

How many times can you breed a male dog?

There is no limit to how many litters a male dog can produce in his life time.

Some have even reported male dogs mating up to 5 times in a single day.

To ensure quality and consistent impregnation, however, different tactics must be employed.

Some breeders breed their studs only a handful of times every year, while others may choose to breed them almost every week.

If sperm is collected on a regular basis, the dog should be allowed time to replenish the harvested sperm in between collections. Thus, in order to ensure consistently quality sperm, collection should happen no more often than every few days.

That said, if a male dog is not bred on a regular basis it is possible to harvest good quality sperm every day. Though, this can only be done for a short period of time as the dog will eventually run out of sperm. For smaller dogs, this could be up to 3 days, while for larger breeds it may be possible to collection every day for up to 5 days.

If you have a male dog and you are thinking of allowing it to mate, then you should bear a few things in mind before you go ahead.

If you do not have a high pedigree of dog and are not interested in the business of selling the puppies that you get from breeding, it may be better to have your dog neutered rather than allowing it to mate.

Neutering your dog will not only eliminate the chances of prostate cancer and testicular diseases, it also helps in making your dog less aggressive and more affectionate as well as lowering the risk of aggression from other male dogs. Overall, the chances for your dog living a healthier life, greatly increases.

So, always take into consideration how beneficial it is to allow your dog to mate and is it better to neuter the dog as the chances of unnecessary mating and the risks of health problems are sufficiently reduced.

If you are still interested in proceeding with allowing your dog to breed, it is better to plan out the breeding and take adequate measures to prevent your dog from breeding with strays as it increases the population of dogs on the street.

Approach a good breeder to find a suitable female for your dog to mate with.

Check the lineage of the mate and try to ascertain if there are any hereditary disorders that may be passed on.

It is essential to check that your dog is healthy in all respects and the vaccinations that need to be administered to the dog are given and is up-to-date.

If you are worried a lot about pedigree and purity of breed, check the certification of the dog before going ahead.

Both the dogs have to undergo courtship to get to know each other before mating. If the dogs are mating for the first time, the female may become very nervous and a good breeder will know how to calm the dog to allow successful mating.

One should be careful with over breeding a male dog as it can lead to the popular sire syndrom. In this case a male dog is breed so much that the offspring will eventually mate with each other, increasing the chances of genetic diseases in future generations.

Once there is no longer a desire to breed the male dog. It is often advised to have him neutered. One occasion for this could be when he enters the later stages of life.

Why do dogs get stuck together when breeding?

Should I neuter my dog?

How long will she be in heat and how often will she go into heat?

How long is the average length of pregnancy?