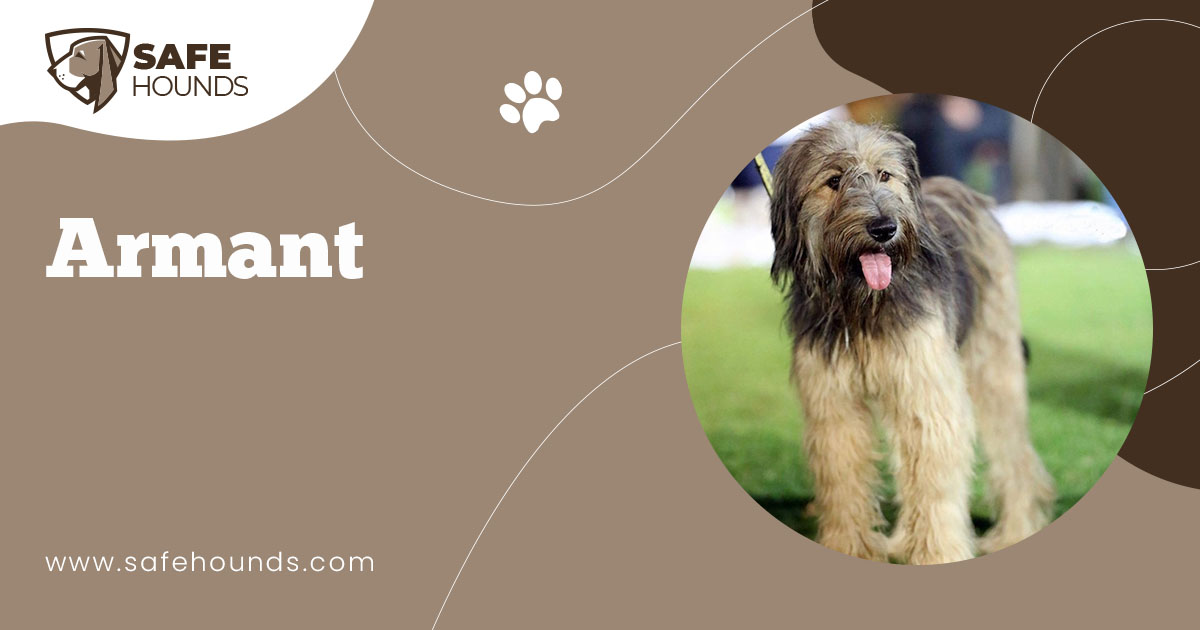 Ermenti, Egyptian Sheepdog, Hawara Dog, Chien de Berger Egyptian all these names refer to a medium sized herding dog that was developed in the Armant town of Egypt. Although the precise origin of the breed is unknown, it was generally believed that this breed originated from the dog brought to Egypt by the troops of Napoleon.

The Armant is a rare bred of dog that is relatively unknown outside its country of origin. These dogs though are highly valued not only in Egypt but also in Holland and in France where present day Armant dog are being bred and developed. An Armant is a fearless and tireless working dog. This medium sized breed will never be intimidated by wolves and other ferocious wild animals. The dogs will always be ready to safeguard the animals under its protection. An Armant is noted for being an excellent herding dog but this is a loyal and devoted breed that possesses the inherent canine eagerness to please. This dog has a well developed protective instinct. Because it bonds closely with its people it will not hesitate to lay its life on the line if it is necessary to protect the master and the property. An Armant is a territorial breed. It will never fail to announce the arrival of strangers and it will never let intruders to enter the home. This trait can be a problem. The dog has to be socialized and obedience trained early on. This herding breed is intelligent. Commands of the master will not be necessary as the dog will act on its own. The instinctively knows what must be done when it is herding or protecting the livestock. The independent nature of the dog can be a problem as it is one of the breeds that proved to be hard to obedience train. These stubborn dogs are not for first time dog owners. Finding an Armant puppy will be hard as well. This is a rare breed. Apart from the rather high price, a potential owner has to be prepared to be put on a long waiting list.

The Armant is a medium sized breed, typically measuring from 21 to 23 inches at the withers and weighing from 50 to 65 pounds. This breed has a large head. The medium sized muzzle is strong and proportionate to the large head. This bred of herding dog has small round dark colored eyes. Armant dogs typically have black noses though some individuals have noses that compliment the color of the coat. There is no standard for the ears. This breed may have different types of ears. One dog may have pricked ears and anothers ears may hang down close to the cheeks. An Armant is a working breed. These dogs are expected to have strong well muscled bodies. This dog has a strong medium sized neck. The muscular broad chest is deep as well, providing enough room for the heart and the lungs. The ribs are well sprung. These agile and nimble footed dogs have powerful hind legs with well bent hocks. An Armants forelegs are straight and strong. Small feet have arched thickly padded toes. This breed has a shaggy long coat that is rough to the touch. An Armants coat can be of multiple colors. Acceptable colors are black, black and tan, gray and shade variations of gray and yellow. An Armants tail is long. Some individuals are docked. Natural tails are curled and carried in an upright manner.

Armants are quick and agile herders. These dogs have well balanced movements and exude confidence while herding its charges. These perceptive stock guardians would immediately discern if there is a potential threat and would immediately respond to the situation. The dog may be a serious worker but it does have a playful and lively personality. Always eager to please, the dog would be the happy and patient playmates of the children. The high level of energy makes this breed a good choice for an energetic master as it would be a suitable jogging and hiking companion. This breed is territorial but moderate socialization will be enough to introduce the dog to other dogs and smaller pets. This excellent stock guardian also makes an excellent family pet and companion. However, this dog is not for everyone. The master has to be able to manifest the leader of the pack status. A dog that thinks it is higher in rank than the human family will be a hard to dog to manage.

The Armant is a fairly healthy breed. This breed has a life expectancy of 13 years. This breed is energetic. It has high exercise requirements. A potential owner that does not have the space or the time to provide the dog with adequate exercise should opt for another breed. A poorly exercised Armant will be a very destructive dog. Exercise will promote the mental and physical well being of the dog. The Armant has a longish hair but the shaggy coat would not need extensive maintenance. Regular brushing will be sufficient to maintain the beautiful condition of the hair.

The Armant is a medium sized breed of Egyptian sheepdog. This breed was originally developed in the historic town of Armant hence the name. Not much is known about the specific origin of this herding dog. As with any other ancient breeds, the Armant too has a number of theories regarding it history. It was believed that these dogs have existed in Egypt during the 15th century. It was speculated that the breed has descended from the Briards and from other sheep herding dogs. It was also though that the Armant have descended from the dogs brought by Napoleons troops during his expedition to Egypt. As there were no evidences, these theories were not scientifically proven.

An Armant is a strong and agile dog with well balanced movement. This fleet footed breed can work tirelessly in the harshest terrain and under extreme weather conditions. Throughout the breeds history, it has served man by being the fearless protectors of the livestock as well as the loyal and protective companion. The Armant is noted to have a fearless temperament. These dogs can be depended to protect the livestock as they fear no predators. These dogs are perceptive and always alert, ready to respond to any situation that would be threatening to the stocks under its care.

Because of its fearless temperament and good nature, the breed has gained popularity in Egypt. However, the breed is considered rare as it is relatively unknown outside its country of origin. As mentioned this breed was originally developed in Egypt. Up to this day Armants are still herding, driving and protecting the livestock. These dogs are also kept as family pets and companions. Present day Armant though are now being bred and developed in France and in Holland. In fact this breed is noted to have played a major role in the development of the Bearded Collie.

The Armant is recognized by the American Rare Breed Association and by the Federation Cynologique Internationale.