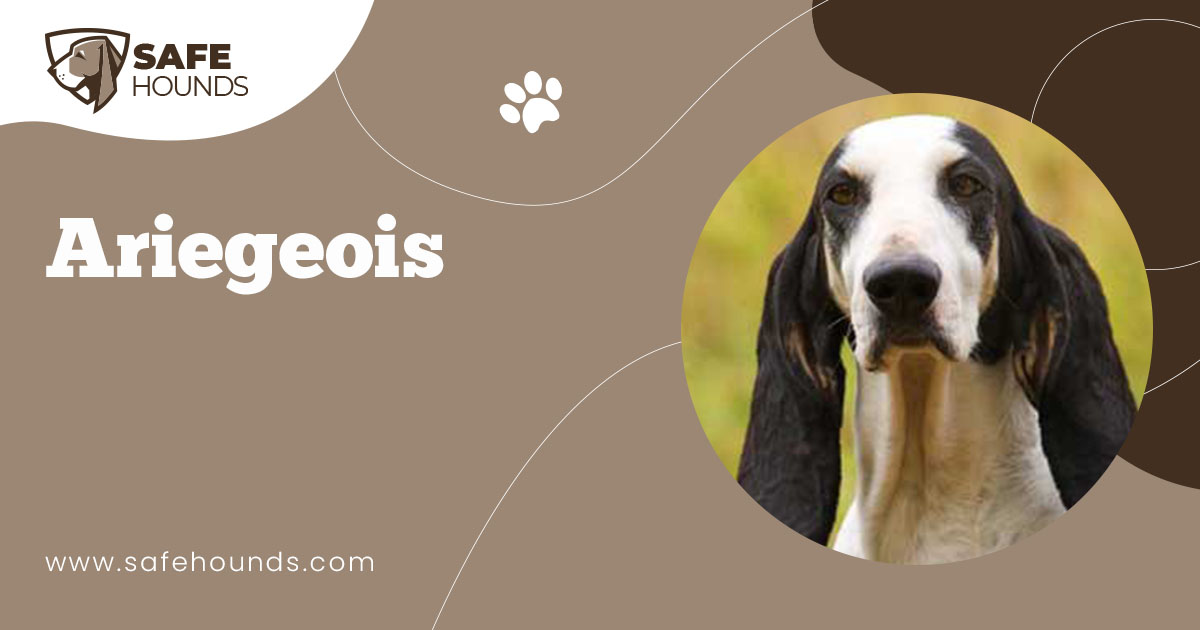 Ariegeois was developed in the last century making this French scenthound to be a fairly new addition to the family of hounds. The name of the breed was taken from Ariege, a province south of France where the dog originated in 1912. This breed seems to be the smaller version of the Grand Bleu de Gascone. This is because the Bleu Gascon along with the Gascon Sain-tongeois and the Chein dArtois were used by breeders in the formation of the hound that is known for its excellence in hare hunting.

The Blue mottled breeds of the Midi are the Ariegeois, the Grand Blue de Gascon and the Grand Gascon Saintongeois. The Ariegeois is the most finely built but it is also the smallest. Although quite small he dog has retained the characteristics of its ancestors. One can say that the Ariegeois is an improved version of the scenthounds the dog has descended from. Because it is smaller, its lightness enables the dog to hunt easily on difficult terrains. The Ariegeois is an excellent hare hunter although the dog is also known as an outstanding deer and wild boar hunter. The dog is enterprising and shows much initiative. It can easily flush out game to the waiting guns of the hunters. For a small dog the speed and the level of endurance is pretty remarkable. The dog also has an astonishing powerful voice.

The Ariegeois is a handsome dog, one that is known to hunt excellently in all types of terrain. After a hunt, the dog can be found in the home performing another role, that of a devoted and loyal home companion. In spite of all these outstanding qualities, the dog is not recognized outside its region of origin. The discrimination is due to the mix origin of the breed. The Ariegeois are often referred to as bastards or half bloods. This makes the Ariegeois a rare breed.

Like any other scenthound the Ariegeois is a very reserve dog, known only to interact with the family. Socialization while the dog is still a puppy is therefore needed. This breed is fairly easy to train but it must be noted that this breed is a scenthound. The dog may be distracted by interesting smell and it would not be unusual to see the dog sprinting after a prey. Calling the dog would then be difficult.

The Ariegeois is a French hound that is not usually seen outside Ariege, its place of origin. Even in France the dog is relatively unknown. It was noted that the photo of this breed was included in the rare breeds of dogs. An Ariegeois is a small dog with a noble expression. The dog has a long wrinkle free head, a black nose with well developed nostrils, thin long ears that can easily reach the nose when drawn along the jaw line and chestnut brown eyes that have a gentle and trusting expression. The well rooted tail tapers to a point and carried saber like when the dog is in motion.

The oval shaped chest that is wide, deep and well developed almost reached the point of the elbows, the well sprung ribs and the well muscled loins contributes to the dogs well built appearance. The muscular thighs give the dogs a superior propelling power, the well knit feet similar to that of a hare enables the dog to scale rocky outcroppings while hunting.

An Ariegeois coat is short smooth and fine. The coat is predominantly white with irregularly shaped black patches or markings. The body can be mottled or ticked. Some dogs are simply white without marking, some are not ticked. Black head and ears, white blaze between the eyes or one that extends to the head are preferred markings.

The Ariegeois is essentially a scenthound with outstanding hunting abilities. These dogs are accustomed to working in close proximity with scenthounds of other hunters. This enables the Ariegeois to get along well with other dogs. This is a happy and sociable breed, one that can be easily trained and one that will form a deep attachment and loyalty to the master. Although these are hunting dogs, they have adapted well to being home companions. An Ariegeois would constantly want to be beside the master, would follow the master where ever he goes. This is one dog that will constantly show its eagerness to please attitude as it would eagerly carry out the commands of the master.

The dog is friendly with the family, gentle and docile with the children. These dogs are never shy and aggressive but they would show their reserve and wary nature with strangers. These are free spirited dogs and the ideal owner is one that is active and dog experienced. This breed is not suited for city living. The dog will be bored and can be destructive if confined in an apartment. Being a hunting dog the Ariegeois would need to be active and to exercise while waiting for the next hunt. A suitable living arrangement will be one in the rural areas where ample space will be provided for the dog to exercise.

The Ariegeois is a dog that is easy to care for. Stripping and trimming the short smooth coat will not be necessary. The coat is easy to maintain. Brushing and combing once or twice every few weeks would keep the good condition of the coat. Frequent bathing will not be necessary, twice or thrice a year will suffice. Ears of the dog however must be regularly checked. These dogs have pendulous ears and typical to these breeds are ear infections. Because the ear canals are covered by the hanging ears they often stay moist and became the breeding place for bacteria.

The Ariegeois is also known as the Briquet du Midi. This is a small to medium sized French hunting dog primarily used to hunt hare and other small game. This is a recently developed breed. It was believed that Count Vesins Elie had made a series of cross breeding between the Grand Blue de Gascon, Grand Gascon Saintongeois and Briquet hounds. These series of mating were done in Ariege, a province south of France.

The Ariegeois is an exceptionally good hunter and recently the dog has evolved into an outstanding home companion that shows loyalty to the master. In spite of these qualities the dog is relatively unknown outside France. The dog is commonly called the Bastard Hound by the Ariege locals because the dog is not a purebred. The discrimination is due to the mix ancestry of the breed in spite of the fact that two of the progenitors, the Bleu Gascon and the Gascon Saintongeois are of noble blood. This is the reason why the existence of this breed was not disseminated to dog lovers all over the world.

The breed has remained virtually nonexistent until the formation of the Club Gascon Phoebus in 1908. This club encouraged the breeding of the Ariegeois. Pack trials that demonstrated the outstanding qualities of the breed were organized at the Ceron Villa. The breed almost became extinct after the Second World War fortunately it was revived by French hunters and dog enthusiast who valued the endurance, the staying power as well as the tenacity of this scenthound. On January 1, 1993, the breed was recognized by the United Kennel Club.