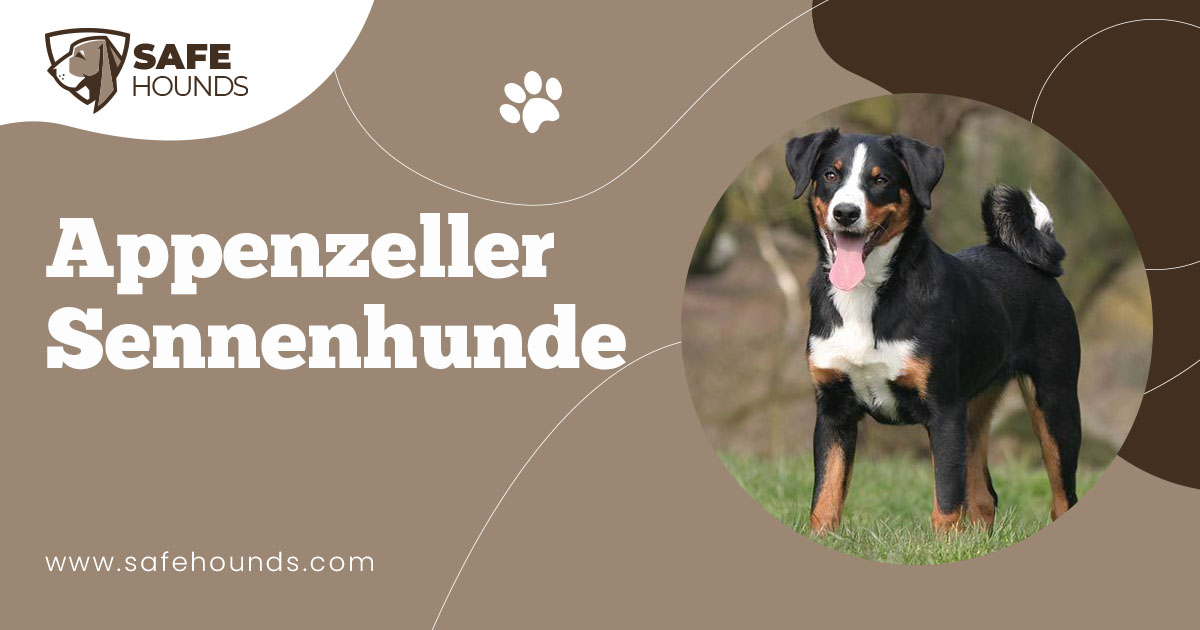 Appenzeller Sennenhunde is a dog that was given the nickname Blaze because of the blaze that runs from the dogs nose to the forehead. This is one of the oldest breed of dogs and one of the four Swiss mountain dogs. This dog is considered to be rare and near extinction. The name of the dog was taken from Appenzel, the region where the dog was originally bred. Dog of the Alpine dairymen is the meaning of sennehunde.

An Appenzeller Sennenhunde is noted for being an industrious and tireless dog. The dog is most happy if given a task to do. If you own one you will surely know that the dog does not have a single lazy bone in its body. These dogs were primarily developed to herd cattle thus the name Appenzell Cattle Dog. Soon enough the dogs are given various tasks in the farm. The dog can now be seen pulling carts loaded with farm produce to market stalls. The dog will work all day watching the herd, perform other duties in the farm and would still stay up all night to guard the flock as well as the household.

Present day Appenzeller Sennenhunde has become loyal and affectionate pets. These are highly intelligent dogs that can adapt to any new situation easily. Training these dogs can be quite easy as they have the innate canine eagerness to please attitude. Appenzellers have come a long way. From being a helper of dairy farmers, the dog has turned to be a first rate therapy and seeing-eye dogs. Before, the Appenzeller is guiding cattle, now the dog can be seen escorting the handicapped. This dog is a barker. This trait that can be annoying to neighbors is what makes the dog excel in avalanche and disaster rescue operations. The dog also excels in agility and conformation field trials.

The Appenzeller Sennenhunde is not a massive dog but it does have a compact and well muscled body. The dog has an almost square appearance due to the fact that the height is almost equal to the length of the body as measured from the withers. Appenzeller males have an average height of 20 to 23 inches and female height ranges from 18 to 20 inches. Some would say that the dog is valued more for its working abilities rather than for its appearance The Appenzeller however has captured the heart of dog lovers not only because of its outstanding traits but also because of its lively, humorous and entertaining expression.

The dog has a broad and flat skull, a strong muzzle that tapers to a black nose. The slightly oblique position of the almond shaped dark brown eyes give the dog a humorous expression. The V shaped ears with rounded tips hangs close to the cheek when the dog is resting and raised at the base when the dog is alert giving the head a triangular shape. The dogs lips are tight fitting and a scissor bite is preferred.

The Appenzeller Sennenhunde is a herding dog and as such it has to have a strong and athletic body to be able to work effectively with the livestock. The dogs back is strong and straight. The broad chest is deep reaching to the dogs elbows.

The dog has a double coat that is tight, glossy and dense. Basic coat color is black or brown. As mentioned, the dog is often called blaze because of the white blaze that runs from the forehead to the eyes and down to the muzzle. A small white streak run down from the chin and broadens on the dogs forechest. The feet are tipped with white and so is the tail. The tail is high set, thickly covered with hair. Hair on the lower part of the tail is longer. A moving Appenzeller carries the tail curled over the side of the croup.

The Appenzeller Sennenhund has started up as a stock herder and as such it is used to mixing with livestock and gets along well with other dogs. The Appenzeller has found its way to the homes of dog lovers. The lively personality endears the dog to all members of the family. Although the dog reciprocates the affection it is known to bond strongly with a particular member of the family. These dogs are known to favor women. Well treated dog will show its appreciation by being gentle and kind to children. An Appenzeller is definitely pro kids.

An Appenzeller Sennenhunde is a working dog. These are active and energetic breed that are most happy when working. Appenzeller pets therefore should be given ample opportunities to exercise. Apartment living is definitely not for an Appenzeller not only because of the space restriction but also because the dog would hate to be cooped indoors but neither should the dog be kept in a kennel. The most suitable living environment for this breed is one in the rural area where the dog will be allowed to run free. These dogs are known to choose their own shelter. Appenzellers are barkers, another reason why the dog is not suited for apartment living.

Generally, dogs with short hair require very little grooming. If you own an Appenzeller you will not be bound to give the dog a more frequent grooming. The short double coat of the dog can be brushed with a curry comb to remove dead hair. These combs are made of rubber and apart from removing dead hair, it also massages the skin of the dog.

Since you wont need to brush the dog very often, make a thorough job when you do. Brush the entire coat, also the tail and the paws. Clip uneven hair on the tail to give the dog a well kept appearance. You may also check the dog for signs of infection and external parasite infestation.

Like other ancient breeds of dogs, the origin of the Appenzeller Sennenhund is foggy although there are two known theories. One theory states that the dog originated from the Molossus dog that were brought by the Romans to Switzerland. This speculation was countered by the second theory that believes the dog to be a descendant of the Cani familiaris palustris, the house dogs of the prehistoric stilt builders. These are Swiss lake dwellers who build their houses in stilts along the lake shores.

The Appenzeller Sennenhund is one of the four sennenhunds (dairy farmers dogs) and is considered to be the rarest. During the early times, the dog was an all around utilitarian animal. Cattle herding emerged in the 15th and 16th centuries. The development of the Appenzeller as a cattle herding dog happened during this era. The cattle grazed on the forest cleared to become pasture land. A herding dog is needed to keep the herd together. The dog needs to be quick, fit and an excellent guard dog. In spite of the spartan rations the dog has to be able to cope with the strenuous demands entailed by the job. This need resulted to the development of a medium sized dog that is both muscular and has an unaccountable liking for work. The Appenzeller Sennenhund was developed.

These non-standardized dogs are utilitarian dog, breed for their skills rather than for their appearance. The Appenzeller, the multicolored dogs known for its penchant for barking are now found in many regions of the country, pulling carts, herding cattle, guarding homes and doing many other tasks in the farm. A movement whose aim is to preserve the purity of the breed was started towards the end of the last century. Dogs that have the typical characteristics of the Appenzeller Sennenhund were sought. This movement was greatly supported by farmers, the dogs were provided for breeding.

In 1906 the Appenzeller Sennenhund club was founded. Professor Dr. Albert Heim prepared the first standard for the breed. The standard was defined in 1914, creating the distinction of the Appenzeller from the other Swiss mountain dogs.