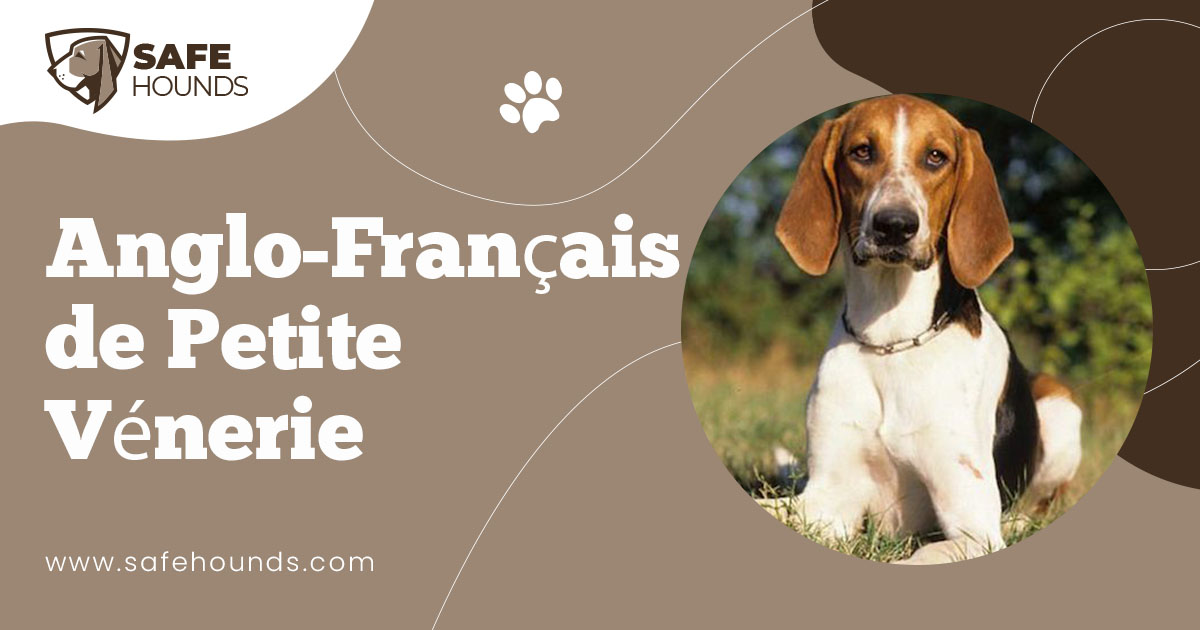 The Anglo-Français de Petite Vénerie, a dog that has a strong bone structure and attractive coloring is most valued for its exceptional hunting abilities. This dog that calls France home is rare in other parts of the world. The petit is a typical French dog with English hound blood flowing in its veins. The Anglo-Français de Petite Vénerie was the result of breeding smaller French hound like the dAr-tois with the beagle.

The petit like its brothers the Great Anglo French hounds, is an exceptional hunter that seems to enjoy hunting probably more than the human hunter does. The dog has a well developed olfactory sense. The good voice is one of the dogs outstanding qualities. Surprisingly, unlike other dogs barking, a petites is pleasant to the ears. The dog has a quick gallop, posses a great stamina and known to be very tenacious. The dog can work tirelessly for hours. The petit was primarily developed to hunt rabbit. The dog can hunt in any type of terrain. Once a scent is found the dog will tirelessly scour the area in a systematic manner until the prey is found. Presently, the petite not only hunts rabbits but also pheasant, fox, deer and wild boar.

Although the Anglo-Français de Petite Vénerie has a remarkable appearance, the dog is seldom developed to be show dogs. These are purely utilitarian dogs that are known to be very loyal to the master. The free spirited dog that was so used to living in a kennel together with a large pack of dogs now have found a niche in the home of dog lovers. The petite has become accustomed to indoor life and evolved into a wonderful companion, one that is capable of performing varied roles because of its intelligence. From being a hunter, the petite is now a devoted pet, a loyal companion. The dog had turned into an excellent watch dog. The dog is friendly but also wary of strangers. The bark would alert the owners of intruders.

The Anglo-Français de Petite Vénerie was developed to be a pack hound to scent and trail small game. As such the dog has to be agile, tenacious and most importantly, to have a strong body that can be resistant to harsh climate. This is necessary as the dog will be utilized to hunt in all types of terrain.

The petite was developed by crossing English hounds with French hounds. The dog that resulted has the typical nose and throat of the French hounds and the temperament of the English hounds. The dog has a weight of 34 to 44 pounds and height that ranges from 16 to 18 inches. This medium sized dog has a balanced and compact body. The dog has a convex skull and an elongated head and muzzle. The nose is well pigmented, the brown eyes are big and have a gentle but lively and alert expression. The ears of medium width are attached below the level of the eyes. The tail that is set on the loin line is medium length strong at the base and tapers to a point. It is thickly covered with hair. The tip that is covered with a rough off-standing hair is carried at the back forming a curve. This gives the dog a cheerful appearance.

The dogs coat is short and smooth. The coat lies close to the body of the dog. Coat colors can be tricolored, black, white and bright or pale tan markings. Dog with this coat color would have a black nose. Black and white dog with pale orange marking would also have black noses. White and orange dogs would have brown or tobacco colored noses.

As stated the Anglo-Français de Petite Vénerie was primarily developed to hunt small game. However, this dog has adapted to living with the family. These are clean dogs with no doggy smell. House breaking would not be a problem as the dog is highly intelligent and can respond well to training. The dogs have the canine eagerness to please attitude and bonds well with the human family. Although these dogs are known to live with a pack, a single Anglo-Français de Petite Vénerie can live peacefully with the family. These dogs are gentle with children. They are never aggressive and would delight playing with the children. But as with other breeds of dogs, it is never wise to leave a small child unsupervised with the dog.

The petites are energetic and active working dogs. They would certainly require exercise. Apartment dwelling is definitely not for this breed. The most ideal living arrangement is a kennel where other dogs are kept for pack hunting. If a kennel is not available, a home with plenty of yard space will be most suitable as the dog will be given the opportunity to exercise regularly.

An Anglo-Français de Petite Vénerie is an easy breed to care for. These are clean dogs that do not have a doggy smell. Because the coat is short and smooth, it naturally repels dirt and moisture. Bathing should be on a necessary basis only. Brushing the coat though should be done regularly not only to promote the good condition of the coat but also the condition of the dogs skin. This breed does not have genetic health concerns but it is prone to ear infection. Ears must be checked and cleaned regularly. Ensure to check the dog for external parasites.

The Anglo-Français de Petite Vénerie is at times called the small French English Hound. This breed is the result of crossing French hounds with English hounds. Although the breed was speculated to have existed in the 16th century, extensive development of the breed was only undertaken in the 19th century.

These dogs are raised in packs, they hunt together. Dogs are selected for their hunting abilities and not for their origin. Dog enthusiasts decided to arrange the breeds according to their origin. They inventoried the dogs. This paved the way for the recognition of the Anglo-Francais breed for those with English-French origin and dogs with obvious French origin were designated as Chein Francais.

The Anglo-Français de Petite Vénerie resulted from cross breeding the English Beagle with small French hunting dogs like the dArtois Francais. Other ancestors of the breed were speculated to be the Petit Gascon Saintongeois, the Little Blue Biscay, Poitevin and Porcelain. In 1957, the French Hunting Association (Societe de Venerie) was established.

The Anglo-Français de Petite Vénerie standard was written in 1978. The breed is unknown outside France, its country of origin. The small dog that was specifically developed to be a hunter of small game has evolved into a wonderful home companion.