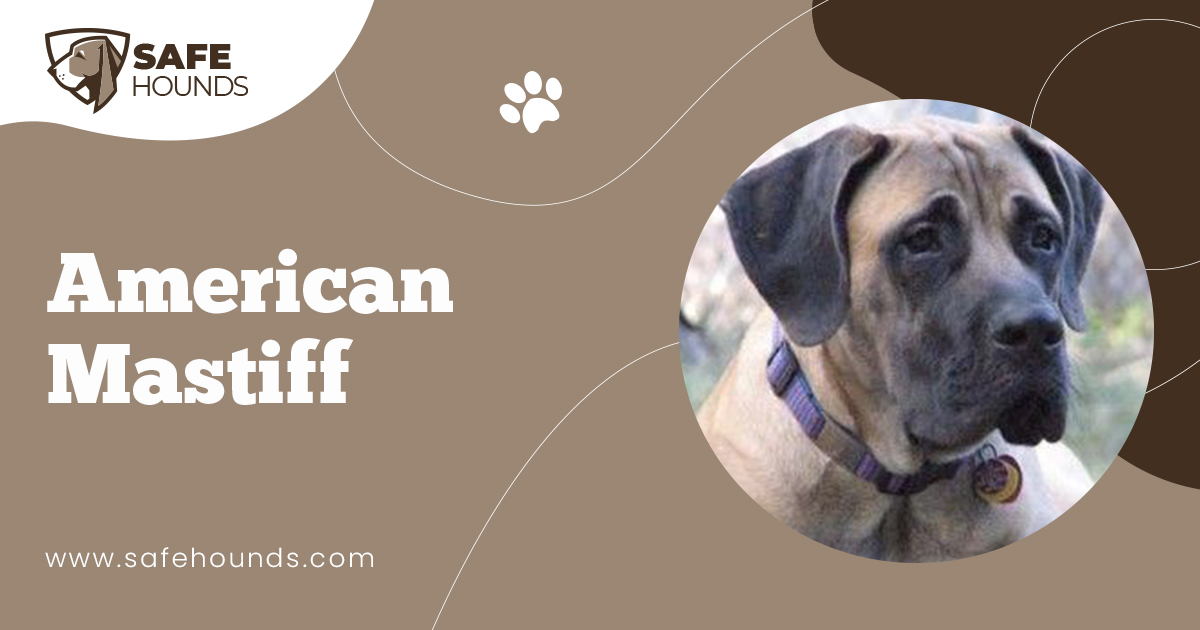 The American mastiff has descended from a breed of ancient dog with a rich history. The temperament of this breed denotes grandeur, dignity and gentleness. The American Mastiff is a breed of massive dogs but they are affectionately called gentle giants because of their good nature. This fairly new breed was developed over years of careful and selective breeding to create a breed that will have the typical size, appearance and temperament of a mastiff but a breed that would have a dryer mouth and one with lesser genetic problems. The English Mastiff was crossed with the Anatolian Shepherd. The breed that was envisioned by Fredericka Wagner of the Flying W Farm in Piketon, Ohio is now the American Mastiff. The objective of the breeding program was realized when the American Mastiff was produced. This is a much drier mouthed breed as compared with other breeds of mastiffs because of a tighter lower lip line. Moreover, this large breed is not plagued with genetic health concerns most common in large breeds of dogs.

The American Mastiff is one of the largest breeds of dogs. This breed has a powerful well muscled longer than tall body, a large head and strong limbs with large feet. The massive size may give the dog an intimidating appearance. Not many people would think that this dog has an inherent gentleness and good nature. This dog is affectionate and loyal to the family. An American Mastiff is dubbed as couch potato given that the dog would rather lie down instead of romp, run and play. The dog may exude an indolent personality but they have a protective temperament. If the family especially the children are threatened, the dog will move with alacrity and become the courageous and aggressive defender.

The American Mastiff is identical in looks with the English Mastiff. The only difference is that these gentle giants do not drool as much as the English Mastiff. The much drier mouth is attributed to the genes of this breeds other ancestor, the Anatolian shepherd. The American Mastiff is one of the breeds that has a slightly longer than tall body. This dog can grow to a height of 28 to 35 inches and can weigh from 150 to 200 pounds. This massive dog has a large, heavy and wide rectangular shaped head. Medium sized muzzle is proportionate to the massive head. This breed has amber colored eyes, a black nose and strong teeth that meet in a scissor bite. Round ears are set high on the head. An American Mastiff has a powerful slightly arched neck. The powerful and straight muscular back has well muscled slightly arched loins. The broad and well rounded chest is deep, descending to the level of the elbows. Well sprung ribs are extended well back. The breed has strong straight forelegs. Hind legs are wide and parallel. Large, compact and well shaped feet have arched toes. The long tail that reaches the hock is wide at the base and tapers to the end. The tail is carried straight with a slight curve at the tip. An American Mastiff has a short dnse coat that comes in three colors – apricot, brindle and varying shades of fawn. A brindle coated dog would have apricot or fawn as the prominent color and marked with dark stripes. White markings can be seen on the dogs feet, chin, nose and chest. American Mastiff puppies are born with dark colored coats that lighten as the pup grows older. At one year of age, the dog is expected to have attained its true color. A black mask is prevalent in American Mastiffs. This is a necessary requirement for a dog to meet the breed standard.\

The American Mastiff is a quiet and gentle breed. This breed exudes dignity rather than gaiety. This breed has a reserve nature. The playful and energetic temperament that is common in most breeds is not manifested by this breed. However, this does not mean that the dog would not be an excellent pet. The dog bonds strongly with its family. They are loyal, affectionate and very protective. These dogs love the children and they are known to be particularly gentle with the little ones. This is a non- aggressive breed but since they were originally utilized as protectors, the dog will not hesitate to sacrifice its own life if it is necessary to protect its beloved family. The dog may show an indolent nature but it is combative with other dogs and very suspicious of strangers. This is not a breed for a first time dog owner. The dog would need socialization and obedience training as an American Mastiff that does not acknowledge its master as the leader of the pack will be a very difficult dog to handle because of the massive size. The dog can live in an apartment. As mentioned these dogs are not very active. They also tend to get lazier as they mature. An owner has to make sure that the dog is exercised daily to release its pent up mental and physical energies. The dog should always be leashed when taken in public places.

Grooming is easy for this breed because of the naturally short and smooth hair. This breed sheds moderately. The dog can be brushed with a firm bristled brush two to three times a week to remove dead hair and to promote the good condition of the coat. Frequent bathing is not necessary for an American Mastiff. Unlike other dogs this is a relatively inactive breed. The dog would rather stay inside the house rather than roam thus they do not get very dirty. A damp wash cloth or chamois will be enough to remove dirt and to give the coat sheen.

Where was an ancient tale about a dog that sacrificed its own life in order to save the master in a military battle. The dog that was made a hero is a mastiff the breed that was noted to be Caesars favorite dog. Mastiffs are considered to be one of the seven basic dog types. These giant dogs have a long rich history. During the ancient times these dogs were called molosus. The ancient existence of this breed was evidenced by Babylonian relics that date back to 220 BC. It was a common assumption that these giant dogs came from Central Asia and were brought to Britain about 500 BC by Phoenician traders. These dogs were the ancestors of the English Mastiffs. The English Mastiff is one of the first breeds that were officially recognized by AKC. This breed is also believed to be the foundation of many mastiff breeds. The American Mastiff is one of the breeds developed from the English Mastiff.