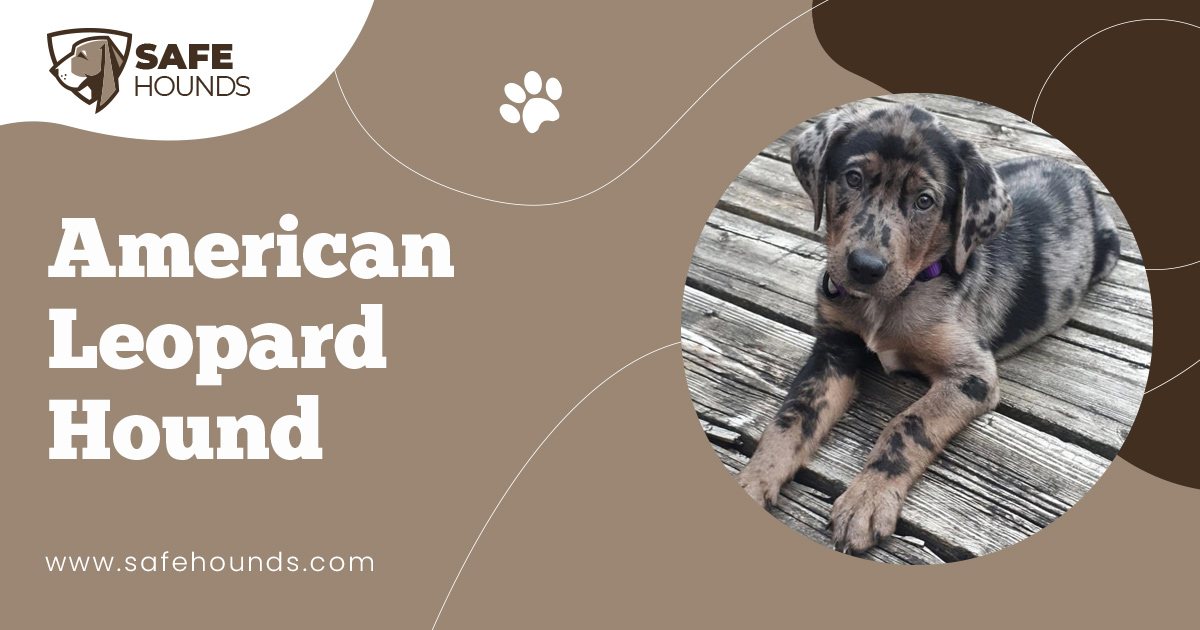 The American Leopard Hound is also known as Leopard Tree Cur, Leopard Dog and Leopard Cur. This dog that originates from the United States is a type of hunting dog with a large muscular body, very strong forelegs and hind legs as well as round cat-like feet that allows this breed to climb trees like a cat. An American Leopard Hound was specifically bred to be an all purpose tree dog.

The exact origin of this outstanding hunter was not established although it was speculated that these dogs have arrived with the Spanish colonizers in the 18th century. These dogs were utilized by the early settlers as livestock guardians, as hunting dogs and as all around farm dogs. These strong and aggressive dogs are known to form a strong bond with its people. With a well developed protective instinct these dogs have saved the early settlers from the attacks of Indians. These dogs are highly valued for being excellent hunters. The American Leopard Hound is utilized to hunt a variety of small and large game. These outstanding hunters have the tenacity to track and hold at bay even the most savage animal. These intelligent and cunning dogs would stay close to the quarry to wait for the human hunter to make the kill but their agility and dexterousness allows them to dodge and duck to avoid the injuries that can be inflicted by the cornered animal. These dogs let out various sounds when hunting. Most American Leopard Hounds would have chop mouths but some individuals are known to yodel, to squall and to occasionally bawl. The resounding voice of this breed can be heard farther than the voice of other hounds.

The American Leopard Hound is one tough cookie. The dog can cope with extremely cold or extremely hot weather. This tireless breed can run for miles without tiring and getting sore foot. When hunting, the dog is seen pacing every now and then presumably to avoid over heating.

The American Leopard Hound is generally a medium sized breed. The height is from 21 to 26 inches and weight ranges from 45 to 72 pounds. This breed has a dense smooth double coat. The outer coat is rough to the touch, the undercoat wooly and fine. This type of coat protects the dog when it trails its quarry in thick underbrush. An American Leopard Hounds coat varies in color but as the name suggest, the coat would normally have the merle color pattern that is commonly termed as harlequin of leopard spots. The pattern though is not a true spotting but a splotching. An American Leopard Hounds coat can be yellow, brindle, black, red, blue or mouse colored.

This breed has a large head that is proportionate to the size of the body. The broad flat skull tapers slightly towards the muzzle. Complete set of evenly spaced teeth meet in a scissor bite. This breed has a black nose. Nearly round eyes are set wide apart. Eye color can be any shades of yellow or brown. Tight and darkly pigmented eye rims give the dog a soft and an appealing expression. Short to medium length ears are wide at the base, set on high and hangs down close to the cheeks. This breed of hunting dog has a well proportioned slightly longer than tall body. This breeds back is broad, level and strong. Slightly arched neck is of moderate length and blends smoothly into muscular shoulders. Chest is muscular and wide, loin is slightly arched and moderately tucked up. The dog has strong and straight forelegs, parallel and muscular hind legs, cat-like round feet and a set on low tail that tapers to a point.

Hounds are commonly aloof, independent and dignified. This is not so with an American Leopard Hound. This breed has an inherent desire to please its family making house breaking and obedience training easy. These dogs have a legendary ability to handle a cold track. The dog shows an immense determination to pursue a game but the dog will always be controlled by the masters voice. These dogs form a strong bond with its people. An American Leopard Hound especially one that is well socialized will be an outstanding pet, a good playmate of the children, a dependable guard dog that would have the ability to asses a whether a stranger is a potential threat to the family or not. These dogs get along well with other dogs but care must be taken if the dog is in the company of other pets. These dogs have a high prey drive and they may give in to the desire to chase other pets. The dog would do well in a home with a yard. These dogs need to run everyday. It would take a lot of efforts for an owner living in an apartment to ensure that the exercise requirements of the dog are met.

An American Leopard Hound is one of the low maintenance breeds. Maintaining the good condition of the coat would be easy. Regular brushing will take care of the loose hair, distribute the natural oils of the skin and promote the good condition of the double coats. Frequent bathing must be avoided and must only be done when the dog is very dirty and damp wash cloth cannot remove the dirt or the bad smell.

A cur, as we understand is a dog of mixed origin a mongrel. The word cur may even have a derogatory meaning. A Cur, however, is a specific type of American dog, a dog that is noted for its proud history. Old time hunters tell us that the word cur was derived from curtailed. The Leopard Cur was born with a bobtail. This dog is one of the types of dogs noted to have been cur-tailed. Curs are versatile dogs. A cur is primarily a stock guardian dog. It is also a family dog that hunts a variety of small game such as squirrels and raccoons. This courageous dog hunts cougars, bear and wild boar as well. During the pioneer days, these dogs can be relied on to put meat on the familys dining table. Early settlers keep several heads of milk cows, hogs and chicken. It was customary for these people to put a fence around the house and to let the animals run freely outside the fence. A cur dog was given the task of rounding up the cow during milking time, of rounding up the hogs and of penning the chickens. One cant help but wonder how these intelligent dog types came into being. Curs have evolved from different lines and developed into different types. These outstanding working dogs originated in the United States.

The Leopard Cur has been in existence in North Carolina since the 18th century. It was speculated that ancestors of these dogs were brought to America by the Spanish conquistadores. Another theory believes that these herding and hunting dogs were brought by the French, the Scotch, Irish and English people that have migrated to the new world. Apparently the dogs were crossed and resulted to the development of the Leopard Cur although it was not pinpointed how the dog got its leopard color. Opinions as to the origin of these dogs may vary but dogs that have come to know the breed agrees to the fact that these dogs have the inherent desire to please the family. These dogs are noted for their outstanding ability to hunt small and large game. The Leopard Cur also answers to the name Leopard Dog or simply to the name Cur. The breed has developed steadily and had spread to Kentucky, Tennessee and to other settlements of the pioneers. The Leopard Cur is one of the most sought after breeds. However, lifestyle change in the 20th century caused the dogs popularity to wane. By 1950s very few purebred Leopard Curs remain. Three men namely J. Richard McDuffie, Leroy E. Smith and A.W. Carter have worked independently to restore the breed. These breed enthusiasts meet in 1959 and established the American Cur Breeders Association to promote the breed.