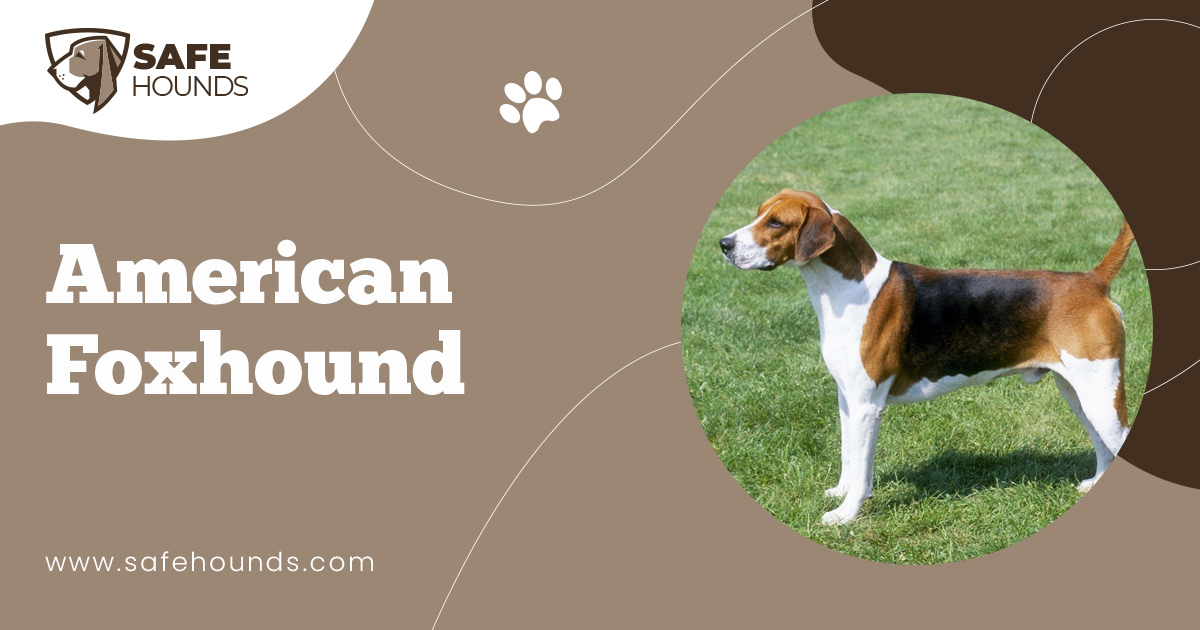 There are a variety of strains of the American Foxhound around today, which include the Goodman, July, Trigg, Penn-Marydel, and the Walker. All the breeds look very different, but are considered to be members of the same breed. The majority of show dogs are Walkers while the hunting dogs are usually Penn-Marydel or any of the strains to the preference of the hunter.

The American Foxhound is what is considered a pack hound and prefers to hunt, hang with other dogs, and stay active. This breed is quite a busy one with such activities as running around a large farm from the break of day until evening and still shows enthusiasm for hunting or playing.

When you first see an American Foxhound, you may think you are looking at a Beagle, as they do resemble one another except in taller and larger. The coat is short and harsh and can be in a variety of colors from white, tan, black, cream, and is usually not one solid color. However, you can see a solid white coat with black, tan, or cream on the head, back, and tail.

The American Foxhound has long and straight boned legs, with a chest that is a bit narrow. He has a long muzzle with large wide set eyes that are either brown or hazel. The ears are set low, long and when stretched can just about reach the tip of their nose. Their ears are close to the head with a slight forward slant and round at the tips.

The body of the American Foxhound is strong and muscular without being loaded, the same goes for the back. The loins are wide and slightly arched. The feet are similar to that of a fox with a full and hard pad with arched toes and strong nails.

Their tail is set fairly high and carried casually. It is not turned forward over their back, but does have a small curve.

The American Foxhound is a very sweet, loving, affectionate, and kind breed. However, when it comes to the hunt they are brave and daring.

They get along very well with children and love their human families dearly. However, they do tend not to like any other animals besides dogs, the pact instinct. The American Foxhound will be perfectly content with all kinds of other dogs but may be a bit aggressive with other pets you may have.

The American Foxhound is normally very friendly even with strangers however, some may also be very protective over family members.

The American Foxhound is not recommended to live indoors especially in apartments. He is an outdoor breed that loves hunting anything when he gets a whiff of their scent. Even outdoors, he can be quite hard to handle if he smells a deer, a squirrel, or in some cases a cat. He will do everything in his power to find the prey. They are not dumb, a matter of fact they are very intelligent and can jump over high fences and even unlock gates when on a hunt. Leaving an American Foxhound indoors can be a huge mistake as they become bored quickly and then will become very mischievous. He will need a large area to romp and play.

Hunting is in their breed and they love all kinds of attention and playful activity. Happy and carefree is the best way to describe the American Foxhound. They tend to be a bit hard to housebreak and will need careful training and regular socialization.

The American Foxhound needs a rigorous exercise program or he can become bored which can lead to misbehavior. Along with exercise, he will need firm training.

He will need to have his short coat brushed and bathed as needed.

American Foxhounds do have a tendency to overeat if the food is accessible, be sure not to overeat, as they will become overweight.

Marquis de Lafayette gave President George Washington French Foxhounds as a gift. Many of the dogs that President Washington owned were descended from Brookes. When they were crossed with the French hounds, they resulted in the American Foxhound that we know today. President Washington loved these dogs so much that he kept his own pack at Mount Vernon.

In the beginning, these dogs were first used to chase coyote, deer, and fox. It has been speculation that during the 17th century this breed was used for hunting Indians. However, this fact has not been proven. The main reason the breed was developed was for hunting foxes. The red fox arrived to the United States by either importation or migration, which brought Irish Foxhounds to be bred with the English Foxhound and the American Foxhound, which added more speed and stamina to the line. This characteristic is still prevalent today.

The most popular American Foxhound strains are the Walker, July, Trigg, Calhoun, Hudspeth, and Goodman.

The Walker known by Mauphin at first were the development of Wash Mauphin in Kentucky. The Walker brothers played a role in perfecting the method of breeding and record keeping for Mr. Mauphin. They sent some of these hounds to Texas and thus the dog became known as the Walkers.

The Trigg strain originated from the breeding of Col. Haiden Trigg of Kentucky. He crossbred Walkers, July, Birdsong and other strains to arrive at his foxhound.

The July strain was born in Georgia. It all began when Mr. Nimrod Gosnell shipped a male hound to Colonel Miles G. Harris in July of 1858 in Sparta, Georgia. The name arrived for the month he arrived in Georgia.

First known as the Mauphin-Maryland strain, the Goodman strain beginnings was attributed to Willis Goodman even though all he really did was send the dog throughout the country.