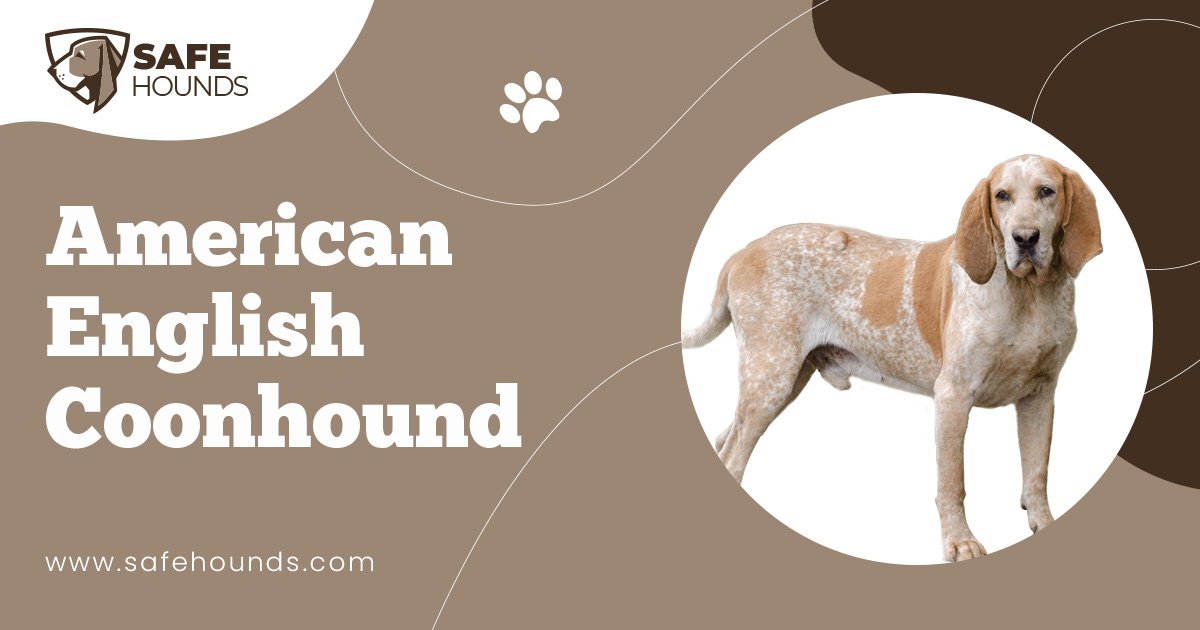 If dogs are made to join the Olympics, the American English Coonhound will definitely qualify. This dog is most noted for its athletic build in fact the dog is often described as a well conditioned athlete. This dog that originated from the United States has great strength and an excellent staying power. The dog is most noted for its great speed and loud baying voice. These characteristics coupled with the superior scenting ability make the American English Coonhound one excellent hunter.

The American English Coonhound was once known as the Virginia hound. This tireless dog is most valued by hunters as it would hunt day and night. At night the dog would hunt raccoons and during the day it would hunt foxes. The dog is a hunter by nature but by American standard the Virginia hound was found inadequate for the reason that the dog is unable to track quarries in trees. To enhance the tracking ability, the dog was crossed with the Bloodhound. The resulting dog is one that can adapt to the rough American terrain, a superior scent hound that tracks and hunts the small opossums and raccoons and big game like cougar, boars, bobcat, deer and bears. These dogs are more effective when hunting in packs.

These dogs have a strong prey drive and they should not be unleashed in an unsafe place. The dog has a strong instinct to hunt and once they found an interesting scent, the dog may take off to tree smaller neighbors pets. These are free spirited dogs and they would always follow their noses. Once a prey is detected, the dog would sprint at once to trail the prey.

An American English Coonhound is a versatile breed. Apart from being excellent hunters with a great scenting ability, the dog also excels in agility and conformation trials. The dog has also developed into a loyal and affectionate house pets. These dogs would continuously bark when hunting. This bawling trait is most useful as it intimidates intruders. The dog can be depended upon to guard both family and properties.

The American English Coonhounds are deep voiced dogs that are medium to large sized. This dog is most noted for its athletic body. The deep chest, the strong back and the well muscled body as well as the stance give the dog the appearance of great strength, vigor and lasting stamina. This lithe body as well as the noted endurance enables the dog to excel in what it was primarily developed to do hunting.

The dog has a slightly domed skull and a broad head that is almost always carried up giving the dog an alert and confident demeanor. The wide set dark brown eyes have a kind and gentle expression. Ears are quite long, almost reaching the nose when drawn out and covered with fine hair that is soft to the touch. Nose can be pink or white although a black nose is more acceptable. The set on high medium length tail is carried high with a slight brush.

The dog has a medium length coarse hair. The dog is often times referred to as the Redtick Coonhound given that the most common coat colors are red and white ticked. Some dogs though are tricolored with ticking, some are blue and white ticked. Others can be red and white or white and black. The rough harsh coat protects the dog from brush while hunting. Being short coated, the dog is vulnerable to cold. They have a low tolerance to cold and needs to be kept indoors during extremely cold weather. Let your pet wear a jacket or a sweater if you are going to take the dog for a chilly walk.

An American English Coonhound makes an excellent companion. The dog is loyal and affectionate with the whole family. Dog breeds have different personalities. Some would stay aloof even if raised since a puppy, others would form an attachment to one person and be indifferent to other members of the family. The American English Coonhound however has a pleasant personality. The dog is sociable not only with the people but also with other dogs. An American English Coonhound is never shy. The dog makes a devoted companion to children, one that would enjoy romping and playing catch with the kids. These are gentle dogs that can tolerate any rough handling (squeezing and hugging) from kids. Although just as with any other breed, it is not advisable to leave very small children alone with the dog.

An American English Coonhound is noted for its big booming voice. The dog has a penchant for barking. This may be an invaluable trait when the dog is hunting but this can be a problem if the dog starts to annoy neighbors. The dog is versatile and extremely adaptable. It can stay comfortably in the wilds in the same manner that it can be relax and comfy in a home. The dog is not one for apartment living as the dog is active even indoors. The dog would need wide areas to romp unleashed. If this is not done the dog will be bored and would become a nuisance. The best living arrangement is one in the rural areas where ample fence secured space will be provided for the dog. The dog needs an active owner that can take the dog biking, walking or hiking.

If you are a very busy person the American English Coonhound may be the ideal pet for you. The short rough coat of the dog needs little maintenance. The short coat does not soak water and dries up in no time. Dirt does not cling on the short coat. Minimal brushing using a bristled brush would keep the good condition of the coat. Bathe and shampoo the dog only when necessary.

The American English Coonhounds can trace its ancestry from the Irish and French hounds that were brought to the U. S. These dogs were first known as the English foxhound as they were originally used to hunt fox during the day and raccoons at night. The hound was first mentioned in a diary owned by one of explorer deSottos men. It was mentioned that rather than hunting fox and raccoons, the dogs were used to hunt Indians.

However the hunting dogs that were developed proved to be inadequate to the hunting needs of the Americans. Americans hunted animals that crawled up in trees. Unfortunately, the dogs that were developed do not have the treeing ability. The hounds would lose the scent once the prey has crawled up a tree. The hound was then crossed with the bloodhound to improve the scenting ability. Through careful and selective breeding, the American English Coonhound was developed. Apart from having a much improved scenting ability, the dog has great strength and pain endurance that makes it adapt to the harsh American terrain. The dog is now a noted hunter of a variety of bears and other American game. The dog has also evolved into an excellent home companion that bags awards from agility and conformation trials.