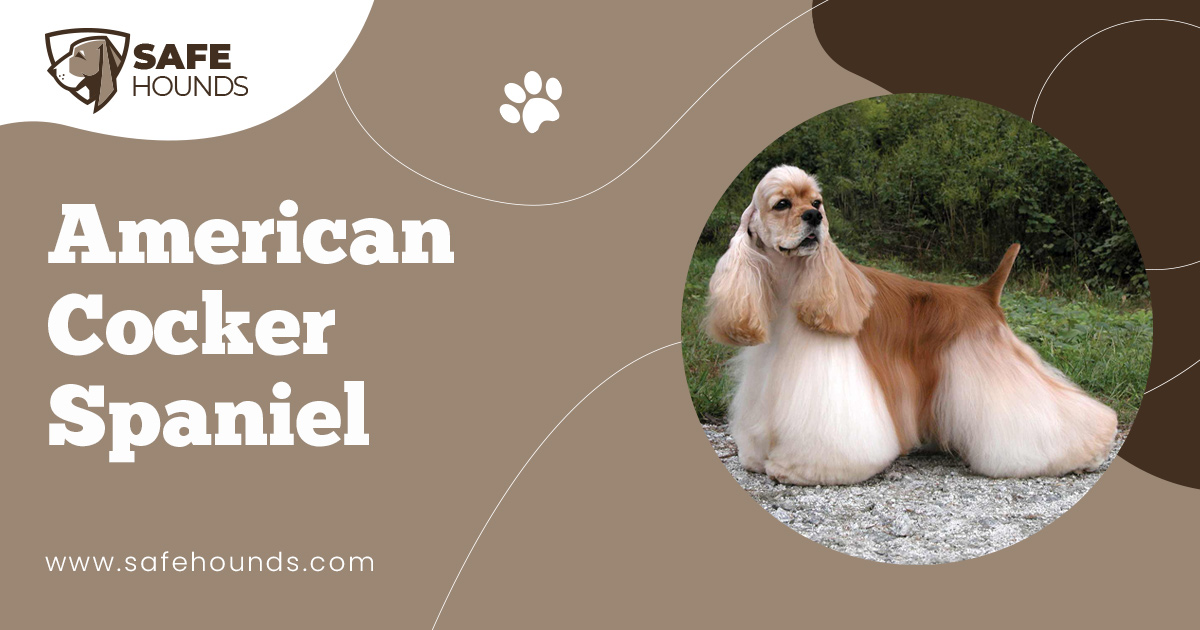 The American Cocker Spaniel is the most loving dog around. Their face has that puppy dog look that has everyone falling in love with them. This breed is not known as a one-man dog. They love families and make great pets for children as well as having their main master. The love of a Cocker Spaniel is what everyone needs in his or her lives.

This breed has been known to be in poor breeding and over breeding. This means that when this happens, the Cocker looses his traits such as being loving and loyal. With poor breeding, the Cocker can have aggression and loose the loving traits it is known for.

The one trait of the American Cocker Spaniel is the eyes. The eyes on the Cocker are very bright and dark. The eyes give off a very loving, happy, and caring look for their family. The ears on a Cocker are furry and floppy. When running, their ears flop, the same goes for while walking.

The coat on the Cocker Spaniel is trimmed on the back and the head, but otherwise the fur coat hangs down and is kind of curly. Their coat color can range in these colors of black, brown, tan, parti-color, and solid colors as well. There are several mixes of colors that can be seen on Cocker Spaniels. Not only as solid colors, but a mix of many different colors. Just like the nose, the nose can come in a full black color or can be brown color as well. The nose color depends on the color of the dog.

A Cocker Spaniels tail is short and stubby with fur. Their legs may be shorter, but they give the Spaniel the trot they show off in show rings and around your home. The Cocker Spaniels look is the most loving look of any dog. Even at the older ages of dogs, the Spaniel still has that puppy dog look they had when they born. This look is a trademark look of the Spaniel. This is one of the main reasons people love this dog. Ranging from children all the way to seniors, this dog is loved by everyone.

The Cocker Spaniel has one of the best personalities around in any dog. Their loving, loyal, friendly, caring, and love the company of everyone they meet. The Cocker is not the type of dog to hate people or kids. The Cocker is known to be shy when they do not get the socialization they need as a puppy, so when they get older they tend to be very shy around people. Otherwise, this dog is happy to see anyone.

Cocker Spaniels are very good with children and will love to play with the kids such as fetching the ball, or just romping around the backyard. A Cocker Spaniel is a good dog for anyone of any age. Also with Cockers, they can be alright for apartment lives, but they need exercise such as walks. They are very active indoors and outdoors as well. Just a small yard is fine for this tail-wagging friend.

The Cocker Spaniel is a breed that loves to be active so they tend to want exercise on a daily basis. Taking them for walks is a wonderful idea, except when walking make sure not to let them get into thicket bushes and such, as to they will tangle in the dogs beautiful fur coat. Make sure, when brushing that you do not pull to hard as you may pull out the silky fur. This breed is your typical shedder.

This breed needs regular trimming of their coat. Some people trim the Spaniels differently than others. Either way you must give the Cocker regular trimmings. You give the Cocker a bath regularly to keep their coat clean and fresh and regular brushing of their coat as well to keep out tangles and mats. The eyes of the Cocker need to be cleaned on a regular schedule because of the build up of eye gunk. The ears also need to be cleaned, as with dogs with ears that hang low they do not receive sufficient air and can become the home to such pests as ear mites.

Cock Spaniels of any type are known for their hunting ability. The hunter would shoot down the bird and the Cocker Spaniel would run out and fetch the pray without any problem. Today, the English Spaniel is more known for hunting while the American Cocker is known as being the companion of humans instead of hunting. After so much breeding of the Cocker, some Cockers have lost the instinct of hunting and also lost some of their traits with poor breeding.

Today, Cocker Spaniels are used for being beautiful and elegant dogs in the show ring. Cocker Spaniels to this day are the most wonderful companions in the world to any human. Even back in history these dogs were known for their loving and caring ways of life.

The abilities of the Cocker Spaniels is hunting, being a stunning show dog, competitive gaming dog, and a gentle therapy dog. These dogs are great in every way. Their loving affect they have had for thousands of years still goes to this day and even the regular bred Spaniels still have the ability for hunting and gaming as others. In the AKC, the English and American Cocker Spaniels are shown together in the AKC show. There are other Spaniels that are shown in different groups other than the English and American Spaniels.