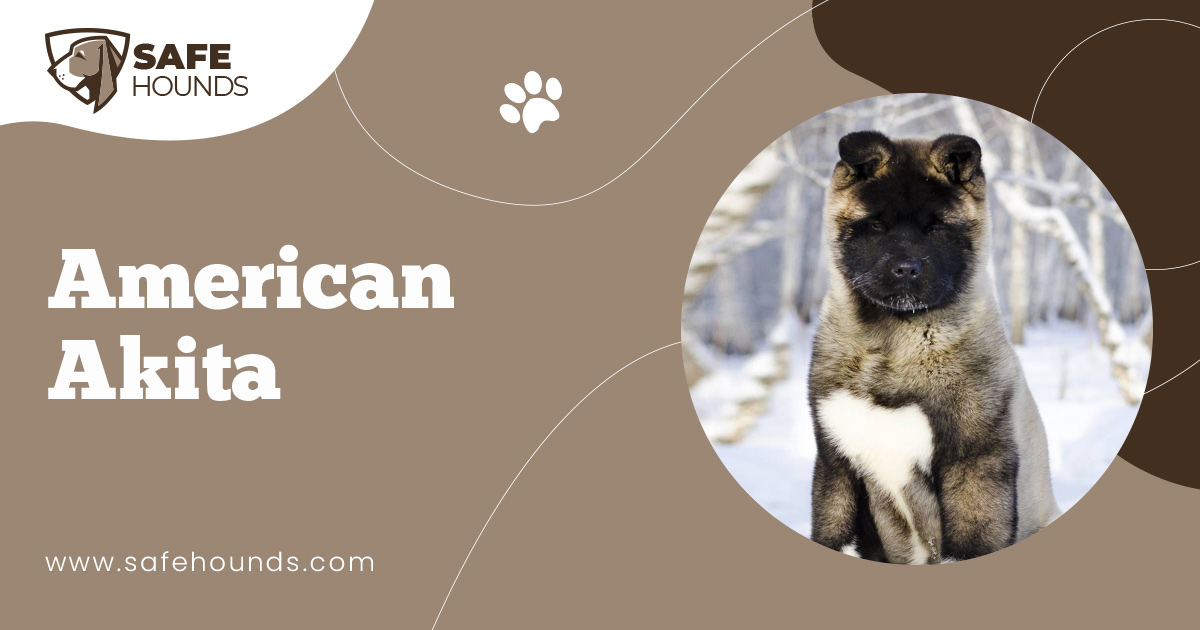 The American Akita is a very handsome dog made noticeable by the rich and clearly colored coat that is comparable to the vibrant colors of a painting on a canvas. This is a fairly new breed in United States having gained recognition from the American Kennel Club only in 1973. This breed however is considered to be one of the oldest breed of native dogs in Japan. It is also known as the largest of the Japanese breeds.

The Akitas are hunters. These dogs are called matagi inus- matagi being a recognition given to the well regarded hunters in Japan and inu is for dog. This breed was originally developed to hunt fowl and large game. An elk, boar or antelope is no match for an Akita. Even the Yezo bear, the fiercest bear ever known can be held at bay by a pair of Akitas.

From being a first rate hunter the dog has evolved into excellent guards and home companions. The name was changed from matagi inu to akita inu, Akita being the place where the dog originally came from. The dogs role has changed. They became the baby setters as they are left in charge of the kids while the parents are at work.

The dog has evolved into a loyal companion. This loyalty paved the way for the dog to be recognized as a Natural Monument of Japan. Hachiko, an Akita was owned by Professor Eizaburo Ueno of Tokyo. The dog would accompany the professor to the train station every morning and would return in the afternoon to wait for the master. Unfortunately, the professor suffered a fatal stroke and died at work. For nine years after the death of his master, the dog would return to the station everyday and stand vigil for his master.

Most Akitas are dog and people aggressive. This trait is a carry over from their dog fighting ancestors. This aggression can be lessened by socialization. These dogs are natural guard and they would do everything even stake their life to protect the family they are guarding. Akitas are extremely intelligent. Socialization and obedience training should not be a problem. However, these are self thinking and independent dogs. Training can be a challenge given that they do not have the eager to please attitude most canine have. Aside from having a stubborn streak, the dog seems to have a misplaced sense of humor. These dogs like to act! Uptight owners should learn how to laugh lest they go crazy with the silly antics of the dog.

Akitas are known to be silly at times but they do have an impressive and noble appearance that exudes power and strength. These are large dogs, males measuring 26 to 28 inches and females height ranges from 24 to 26 inches, weight is pegged at 85 to 120 pounds. A very distinct physical characteristic of the dog is the bear head which is large, broad and short. The erect triangular ears have slightly rounded tips and carried forward over the small dark brown triangular shaped eyes.

This breed has a slightly longer than high body. The chest is deep, wide and the ribs are well sprung. Akitas are Spitz type breed and as such it has the typical curly tail that ranges from full curl, double curl or three quarters curl. American Akitas have double coats, a short undercoat that is thick and soft and an outer coat that is harsh straight and stands off the dogs body. Hair on the head, ears and legs are short and longer on the rest of the body except on the tail which is profusely covered with long hair. Coat can be of any color but the most common are white, pinto or brindle. These dogs have very notable brilliantly colored coats. A black mask or a blaze is a common feature.

In Japan, mothers would leave the children to an Akita while she works the field. This is how the dog is trusted in its native land. These are affectionate dogs that can be depended on to take care, to play with and to guard the kids. These are natural guard dogs and the have a strong protective instinct. Problems often arise when visiting children play rough with the kids the dog considers as his family. Because the dog thinks his kid needs protecting he will attack the visiting kid. As with any other breed of dogs, it is never wise to leave the kids alone with a dog.

These dogs have become wonderful home companions but they still retain their strong prey drive. Take care not to let your per off leash in a place where there are smaller pets. Even if your dog has undergone obedience training calling him to return to you can be a challenge once he decides to trail a pet he considers a prey. An American Akita is a one family dog. This breed is aggressive and would show its dominance over other dogs. These are highly energetic large dogs. They would need a large space to exercise. Apartment living is not for this breed.

Did you know that American Akitas are like cats when it comes to keeping themselves clean? These dogs even bury their own feces. Frequent bathing is not necessary for these clean dogs. This breed though has a very thick double coat that shed twice a year. The shedding process last a few weeks. During this time the dog must be brushed daily. This is to accelerate the shedding process and also to avoid dog hair from being scattered all over the house. Brush the Akita weekly once the shedding period is over. Aside from distributing the natural oil to the coat this is an opportunity for the owner and the dog to bond. An active Akita may not need to have the nail trimmed weekly. The dog will use the concrete to polish its own nail. But if the pet is old and inactive, you need to cut the nails weekly.

The American Akita also known as the Great Japanese Dog was bred in Japan since the 17th century. In Japan, stories about the bravery and loyalty of this breed abounds. This breed is believed to bring happiness and good health. Little statues of the dog are given to an ill person to wish for speedy recovery, the statues are also given at the birth of a child to wish for newborns happiness. Only the aristocracy and the royalty are allowed to own this breed. These dogs are most prized that provision for care and feeding are explicitly stipulated by the ruling royalty.

At the turn of the 17th century, the development of the dog as a hunter was started. Akitas were trained in the mountains of northern Japan to retrieve waterfowl and to hunt large game. Helen Keller, an American author brought the first Akita to United States in 1937. The popularity of the dog grew in America. Aside from hunting the dog was used as a guard dog and a home companion. After World War 11, service men brought more Akitas to the United States. The breed was recognized by the American Kennel Club in 1973.The development of the breed continued. Presently, there are two distinct types of Akitas – the American Akita and the Japanese Akita.