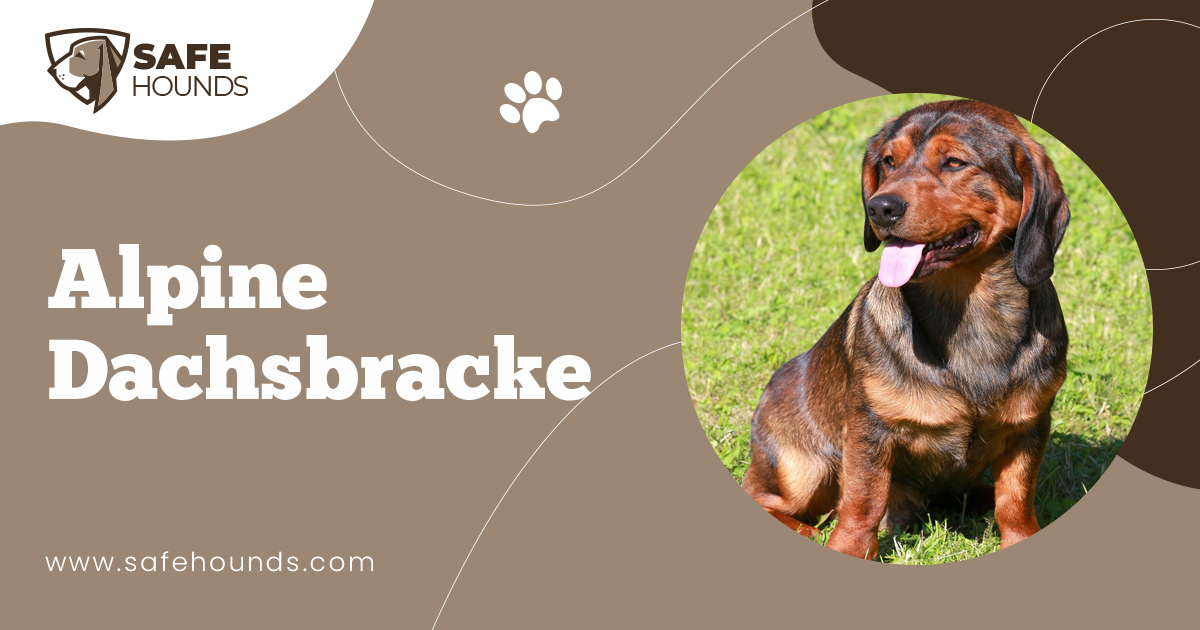 Alpenlandische Dachsbracke, a dog breed that is a member of the scent hound family is most valued by hunters in Austria, its native land because of the dogs exceptional ability to follow a trail gone cold. This dog resembles the Dachshund. The Alpine Dachsbracke however has a longer body and longer legs. Although these dogs are rarely found in other parts of the world, it is a recognized breed since the 1800s.The dog is commonly used to track and hunt wounded deer. It is also used to track and hunt hare, fox and wild boar.

For centuries this small but sturdy and well muscled dog has been noted as an outstanding hunter. While hunting, an Alpine Dachsbracke is a tireless and dependable hunters helper. The dog is strong, possess great stamina as well as a good voice that easily points the location of the prey. Primarily developed in the Alp lands as a hunting dog, the Alpine Dachsbracke can be easily adapted to work in rough terrain. Aside from the excellent hunting qualities, the dog also makes a loyal and reliable companion. These outstanding qualities earned the dog the name multiple utility dog of the Alpine hunter.

The Alpine Dachsbracke was mostly kept by hunters but in recent years, the dog has found another role to play. This time the dog can be seen in the homes keeping watch over the property and being the gentle and affectionate playmates of the children. These are fearless dogs that make excellent watchdogs. They are known to be very friendly with the family but wary and distrustful of strangers. The dog is relatively small but it loves and enjoys barking. This serves as a deterrent to intruders.

Most intelligent breeds are easy to train. The Alpine Dachsbracke is highly intelligent but the dog has a mind of its own and can be very stubborn at times. This makes training the dog a challenge. To train the dog the owner must be firm but gentle and kind as harsh words would make the dog even more obstinate.

The Alpine Dachsbracke is a small breed of dog. The appearance of this dog is similar to that of a Dachshund given that both breeds have a rectangular body although this dog has a longer body and longer legs. Average weight of the dog is from 33 to 40 pound and height that range from 13 to 16 inches measured from the withers.

The Alpine Dachsbracke has a strong, robust and well muscled body. No one would doubt that the dog is a strong hunter. The lightly arched skull, the strong straight muzzle, the black nose and the closely fitting black pigmented lips coupled with the dark brown eyes surrounded by black pigmented eyelids gives the dog an alert but a rather cunning appearance.

The dog has medium length ears with rounded tips. Set on high, the smooth broad ears hangs close to the sides of the head. The dog has an elongated well muscled trunk, a straight back and deep chest with a pronounced forechest. The neck is of moderate length and very muscular. The set on high brush tail (the underside has longer hair) has a tick base and carried downwards.

The dog has a thick double coat, a close fitting dense undercoat covers the entire body and a top coat that is thick short and smooth except for the coat that covers the neck. Coat colors can be black, tan and brown. The most common and ideal color though is deer red intermingled with black hair. A black coated Alpine Dachsbracke with either a white star on the chest or well defined red or brown markings on the chest, head, and legs or on the underside of the tail is a truly impressive looking dog.

An Alpine Dachsbracke was primarily developed to be a good hunter that can adapt to the harsh terrain and the high altitude of the Alps. The dog is fearless, intelligent and has proven its worth as a tireless hunter. Because of these qualities the dog is valued as a home companion that doubles up as a guard.

This dog has an inherent characteristic of being lively, sociable and friendly. The forever puppy personality of the dog makes it an outstanding family pet that provides joy to the human family. Being friendly by nature, the dog is good with children. This breed can tolerate other dogs especially if raised together while still young. This dog need to be socialized as the strong prey drive may cause the dog to hunt neighbors smaller pets.

Moderately inactive indoors, the dog can live in an apartment or in a small household provided it is given sufficient opportunity to exercise. Alpine Dachsbracke were primarily bred to hunt because of the dogs vitality and stamina. These are working dogs and they should be given physical and mental stimulation every day lest they be bored and become destructive. The dog likes to bark and for sure the neighbors would not like to be disturbed by the yapping of the dog.

An Alpine Dachsbracke owner is lucky to have a dog that has a good personality and one that would need very minimal care. Although the dog has a double coat, it would be relatively easy to care given that the coat is short and smooth. A firm bristle brush run through the dogs coat would remove dried up mud and clinging burrs. A rubber curry will give the coat a high shine apart from conditioning the skin.

The dog can be dry shampooed occasionally and bathed when extremely necessary. Frequent bathing will remove the natural oils of the coat that makes it weather proof. Ears must be regularly checked because the dog is prone to ear infection. Nails should be regularly trimmed.

The Alpine Dachsbrackes ancestry was speculated to date back to the middle of the 19th century when dog enthusiast in Austria developed a tracking and hunting dog. However, it was noted that during the ancient times a hunting dog that bore a remarkable similarity in appearance and temperament have existed in the high altitude of the Alps.

The Alpine Dachsbrake is believed to have descended from the ancient strains of indigenous hounds of Austria that includes the Austrian Black and Tan Hound as well as the typical Dachshund. The Alpine Dachsbracke like the Dachshund has a long body and short legs. This breed is relatively small although it was developed to be slightly bigger that the Westphalian, their German counterpart to be able to withstand the harsher climate in the high altitude of the Alps.

This breed became so popular to hunter because of its outstanding hunting abilities. The dog is an efficient hunter of fox, rabbit and deer. It has the ability to track wounded deer because of its exceptional ability to follow a trail gone cold. This dog became the favorite of royalties. In 1881 and 1885, Crown Prince Rudolf of Habsburg has explicitly instructed his gamekeepers to include the dog on his hunting trips to Egypt and Turkey.

In 1932 the breed that was then known as the Alpine-Erzgebirgs-Dachsbracke was given the recognition as the 3rd scent hound breed by the Austrian top canine organization. The name was changed to Alpenlaendische Dachsbracke in 1975 by FCI and Austria was proclaimed to be breeds country of origin. In 1991 the breed was included in the FCI nomenclature, Section 2 of Scent Hounds.

The Alpine Dachsbracke is first and foremost a hunting dog. Years ago this breed was kept by hunters. Recently though, the breed has adapted well to family life. The dog has become an excellent home companion because of its gentleness with children and its ability to entertain and amuse the family because of its forever puppy personality.