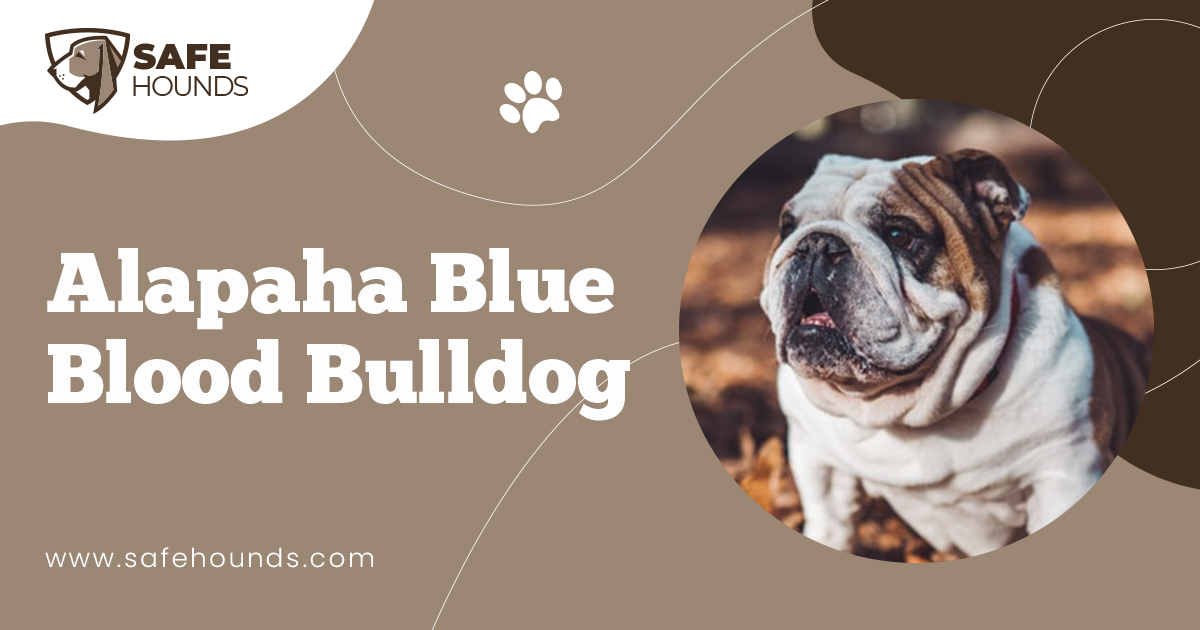 The Alapaha Blue Blood Bulldog is a very rare breed that calls Unite States Home. This mastiff type breed was developed in the 1800s by the Lane family in a plantation in the Alapaha River region in southern Georgia. Bulldogs have always been linked to cruel sports because of its strength and aggressive nature. Bulldogs are noted for their brute strength and tenacious bite. A bulldogs method of fighting is to bite the snout of an animal and to hold on until the adversary is suffocated. This type of bulldog however, has a regal bearing a streak of royalty. The dog gives the impression of being noble, hence the blue blood name. The ABBBs appearance resembles the traditional English Bulldogs. Unlike other bulldogs that have the typical stout body and bow legs, the ABBB has a much leaner body and longer legs. Ancestors of this breed were used to guard slaves in plantations. The courageous dogs were also used as catch dogs for cattle and other farm animals. But the plantations dogs are renowned for their loyalty and devotion to their masters. These traits were passed on to the ABBB. An ABBB is noted for being a dutiful and well mannered dog that makes a wonderful companion, a dog that is utilized for personal and property protection. Unfortunately, the breed is almost extinct with less than 200 dogs in existence.

These powerfully built dogs are very athletic and agile. They may exude an intimidating personality. However, the dogs are docile and noted for their sweet character. These are cool headed dogs. They will not get into a fight without serious provocation. An Alapaha Blue Blood Bulldog though is fiercely protective of its family and its territory. They are distrustful of strangers as well. When the dog perceives a threat to anyone or anything under its care to watch, the dog will instantly exhibit its aggressive nature.

Being one of the descendants of the powerful mastiffs, the Alapaha Blue Blood Bulldog shares the power and the athlete like agility of its war dog and fighting dog ancestors. The ABBB have a muscular build. Typical to other bulldog breeds is the strong and sturdy body. The ABBB have these physical traits too but unlike other bulldog breeds that are rather short and typified by stout bodies, bow legs and wrinkled heads, the ABBB has a much leaner body and longer legs.

The Alapaha Blue Blood Bulldog is a powerfully built square shaped dog that exudes a regal and noble impression. The head is large, the skull is flat. The muzzle that does not exceed 40% of the skulls length and the heavily muscled jaws give the dogs head an almost square appearance. Medium sized rose ears are half perked and carried close to the head with a forward roll. Black is the prominent nose color although some individuals can have gray or liver colored noses. Medium sized eyes can be round or almond shaped. Wide set eyes vary in color. Brown is the common eye color but an ABBB can have glass eyes (blue) or marble eyes (a combination of blue and brown colors in one eye). This breed has a thick medium length neck, heavily muscled shoulders and wide deep chest with well sprung ribcage. An ABBBs coat can be short to medium in length. The undercoat is soft but the outer coat is stiff to the touch, Coat colors can vary from blue merle, red merle or brown merle. A distinctive blue patch over the eye is a common marking of the breed. The dog may also have white or chocolate markings.

Guardian, protector, companion and general hand in the farm are the utilization of the Alapaha Blue Blood Bulldogs. This breed has impressive strength and amazing endurance. The dog was never bred for aggression, in fact this is a docile and well tempered dog. An ABBB though will never fail to act instantly if the family or the property under its care is threatened. The dog will lay its life on the line to defend its owner. Bulldogs have a reputation for being ferocious. The ABBB though is a breed with a big heart. The dog forms a strong attachment to the family. This sweet, loyal and devoted pet is very protective and patient with the children. The sensitive dog would play with very young children in a different manner than it would play with mature kids. An ABBB gets along well with other dogs and with other animals. This breed however is not for a first time dog owner. This is an intelligent but a rather stubborn dog. Socialization and obedience training will be extremely necessary. An owner must achieve the leader of the pack status to train the dog into a wonderful loving pet and an obedient companion.

The ABBB would do well in an apartment as they are relatively inactive indoors. The breed has average exercise requirement but they would appreciate an average sized yard where they can romp and play. Being a short coated breed, the ABBB would be low on maintenance. Extensive grooming will not be necessary as brushing the dog every now and then will be sufficient to maintain the good condition of the coat. The dog is an average shedder. Brushing will cut down the shedding inside the house.

When one hears the term bulldog what would come to mind is a stout and short bow legged dog with a sour mug expression because of the heavily wrinkled skin on the brow and because of the short muzzle with drooping lips. This type of bulldog is commonly referred to as English Bulldog. The Alapaha Blue Blood Bulldog originated from the English Bulldog stock but it does not share its progenitors stocky body and short legged appearance. The ABBB in fact has longer legs and a leaner body. The looks of the ABBB is more comparable with the appearance of the Old English Bulldog. Due to the passing of the Cruelty to Animals Act of 1835, the use of bulldogs in the cruel sports of bull baiting and bear baiting was banned. Breeders have started crossing the English Bulldog with other breeds resulting to the looks of bulldogs today. However, the bulldogs that were imported to the United States decades before were not crossed thus the appearance remain the same.

The Alapaha Blue Blood Bulldog is an extremely rare breed whose origin up to this very day is still a subject of controversy. Breeders of the ABBB came up with different stories in how the breed was developed. The most consistent theory about the origin of the breed is the one that refers to the breeding program of the Lane family. This theory is also the most documented. The breed originated from a plantation dog called Otto. The dog is acclaimed for its uncommon courage. The dog was originally utilized to guard and to run after runaway slaves. The dog was also used as catch dogs for hogs and cattle. Otto was also hunted. The breeding program was started in 1800s with the objective of rescuing these old plantation dogs that were almost extinct. The breeding program was started by the Lane family in a plantation in the Alapaha River region of southern Georgia. The breed is believed to be the creation of a single American family.

The breeding program that spanned three generations was started by PaPa Buck Lane of Rebecca, Georgia. The ABBB have descended from Buck Lanes dog Otto. All the other dogs that descended from this plantation dog were called Otto. In 1943 PaPa Buck was killed by a train. The ever loyal and devoted dog has consistently visited and guarded the grave of its master. The breeding program was continued by Lana Lou Lane, Bucks granddaughter. For 20 years, Lana worked t insure the breeds future. In 1986, she contacted the Animal Research Foundation and asked Tom D. Stodghill, the founder for a plan on how to insure the survival of the ABBB. Lana Lou Lane became the first ARF certified breeder of the Alapaha Blue Blood Bulldog. After Lanas death in 2001, the breeding program was continued by her elderly mother.