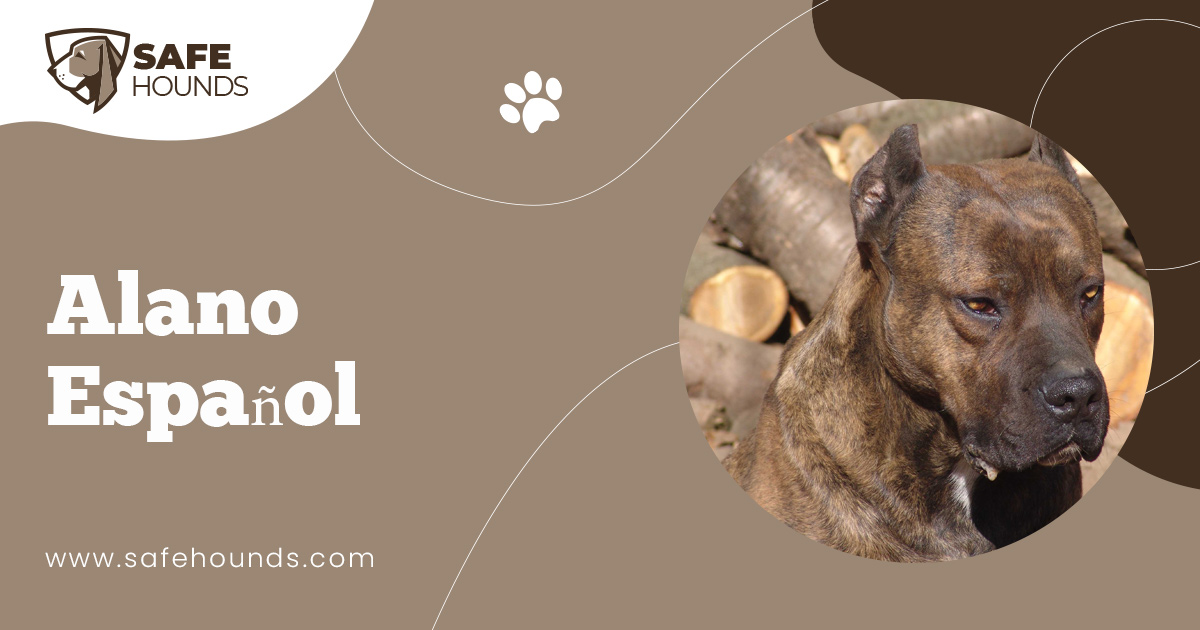 Alano Español is a molosser type of dog that originated from Spain. This breed of dog was made notable by its legendary grip and notable bite. The dog is famous for its destructive jaws and inverted scissor bite. The dog uses its whole jaws and grips with its molars to steadily maintain the bite for as long as it takes to defeat its adversary or until the order to release is given by the master. The Spanish Alano is more popularly known as the attack (presa) dog of Spain. This breed has an aggressive temperament. An Alano Español is a courageous dog that fears nothing and no one. This breed is acclaimed for its unequaled bravery. When fighting, the dog seems to have no concern for its life. It is noted to have a very high threshold for pain.

The Alano is a well proportioned breed. The head that is similar to that of a bulldog has a serious expression. The dog has a strong muscular body, an arched rib case and a deep chest that meets the level of the elbows. This pug nosed breed has the typical black mask of molossers. This athletic breed can run for miles without tiring. For centuries these courageous and powerful dogs were used by the Spaniards to control wild and half wild cattle in the pastures of Andalucia, Salamnca and other Spanish estates. The dog was used in bull fighting and in large game hunting as well. The dog may have a dominant and serious temperament. The dog does not bark much but the mere appearance of the dog would be enough to intimidate. This is why these dogs make very capable guard dogs. The dog is powerful, fearless and protective but they are not aggressive. These dogs are in fact controllable by an authoritative owner. Alano Español is noted for its obedient nature.

A walking Alano Español may deceptively look like an indolent and languid animal. The head that is held low would slowly sway from side to side. But as soon as the dog scents and sees its prey, it will turn into a powerful agile dog that is capable of having a cat-like agility to climb trees, to leap great heights and to gallop for miles without tiring. The Alano Español is an extremely powerful dog. No wonder, the dog has the capability of hunting large game and handling wild cattle. This breed has a well proportioned muscular body. The back is straight and the muscular brisket is wide and deep. Short but powerful neck that features double chins sits on well developed muscular shoulders. The arched rib cage drops to the level of the elbows. Strong boned well developed forearms are long and straight. Hind legs have well developed muscles. This breed has a brachycephalic head. The large bulky head has a rather square appearance. Wide powerful muzzle is shorter than the skull giving the dog a pug nosed appearance. Wide set eyes are slightly ovaled in shape. Eye color that generally takes after the color of the coat can be yellowish or clear hazel. An Alano Españols eyes have a serious expression. Medium sized ears are folded over the face. The ears of this breed though are commonly cropped to a small size with slightly rounded tip. This breed is noted for its very powerful jaws. The medium length tail is thick at the base and tapers to the tip. Tail is usually carried high and slightly arching towards the rump. Tails are not cropped as they are used as a rudder when the dog makes sharp turns. An Alano Español has a short, dense, glossy tight fitting coat. Coat colors vary from negro y atigrado which means black and tigered, yellow, fawn, red and wolf gray. The dog may have a black mask, tiger stripes and white markings on the body.

The Spanish Alano is a dominant and strong willed breed. The dog may even manifest an aggressive behavior. This means that the dog is not for a first time dog owner. However, when the dog is properly trained and well socialized and when the dog has a master who takes charge and assumes the leader of the pack status, this breed can be a well mannered and obedient. Unlike other breeds that form an attachment with a single person, this breed is affectionate and loyal to the whole family. An Alano is noted to be gentle and patient with children. However, because of its protective nature, the dog will be suspicious of strangers. They are even known to attack with no warning. Having been hunted in packs, this dog would do well with other dogs. However, this sociable dog will never turn its back if challenged by other dogs.

The Alano has high exercise requirements. Dogs that are kept solely as pets must have three daily walks. This breed would thrive well in a home with ample space to give the dog opportunities to romp and run off lead. The Alano is quite difficult to housebreak. Fortunately, the dog is suited to sleep and live outdoors. The Alano Español is a low maintenance breed. The short coat requires very little grooming. These dogs are average shedders. Regular coat brushing will distribute the natural oils of the skin. Brushing will also accelerate the shedding process. An Alano is one of the breed of molossers that does not slobber and drool. Bathing the dog should only be done when necessary so as not to remove the natural oils of the skin.

The Alano Español is an ancient breed and as with any other ancient breeds, its origin is as well lost in the mist of time. However, there are several theories as to the origin of this breed that is known as the attack dog of Spain. It was speculated that the Alano arrived in Spain during the invasion of the Iberian Peninsula. When the Roman Empire started to lose its power, the first group of Barbarians to invade Spain arrived in the 5th century. Among these tribes were the Alans. The Alans or Alani are nomadic pastoralists. These herdsmen keep massive guardian dogs that were later given the name Alaunt. The Alano Español is believed to be the direct descendant of the Alaunt.

The true origin of the Alano Español was never verified but it was noted that the breed has existed in Spain as early as 1350. The dog was described in detail in the Book of Hunting published by King Alfonso XI and also in the Treatise of Hunting published in the 15th century. These books described a pug nosed, long bodied and well boned breed that is noted to be a speedy attacker. These dogs were also portrayed in works of art of great painters of the era.

The Spaniards discover and colonize new lands. In their exploration, they took Alanos with them. The Alano Español did not originate from any known breed. The dogs were in fact considered to be the ancestors of many present day breeds of molossers. The Ca de Bou and Presa Canario from the Spanish islands, the Dogo Argentino, Cordoba Fighting dog, Fila Brasiliero to name a few, count the Alano as their ancestors. The Great Dane is speculated to have descended from the Alano as well.

The Alanos were used by the Spaniards as war dogs when they subjugate the Native American Indians. The dogs were later on used in bull fighting. The dog was immortalized in Goyas Tauromaquia. The dogs were utilized in hunting large game as well as butchers dogs. Popularity of the breed started to wane when bull fighting was outlawed. Modernization caused big game to become rare. Dogs to handle cattle were no longer needed when stockyards were modernized. By 1963 the Alano Español is thought to be an extinct breed. In 1980s, Alano enthusiasts started the reconstruction of the breed by searching for surviving dogs. Fortunately about 300 dogs were found in the northern Spain. These dogs serve as the foundation stock for the restoration of the breed.