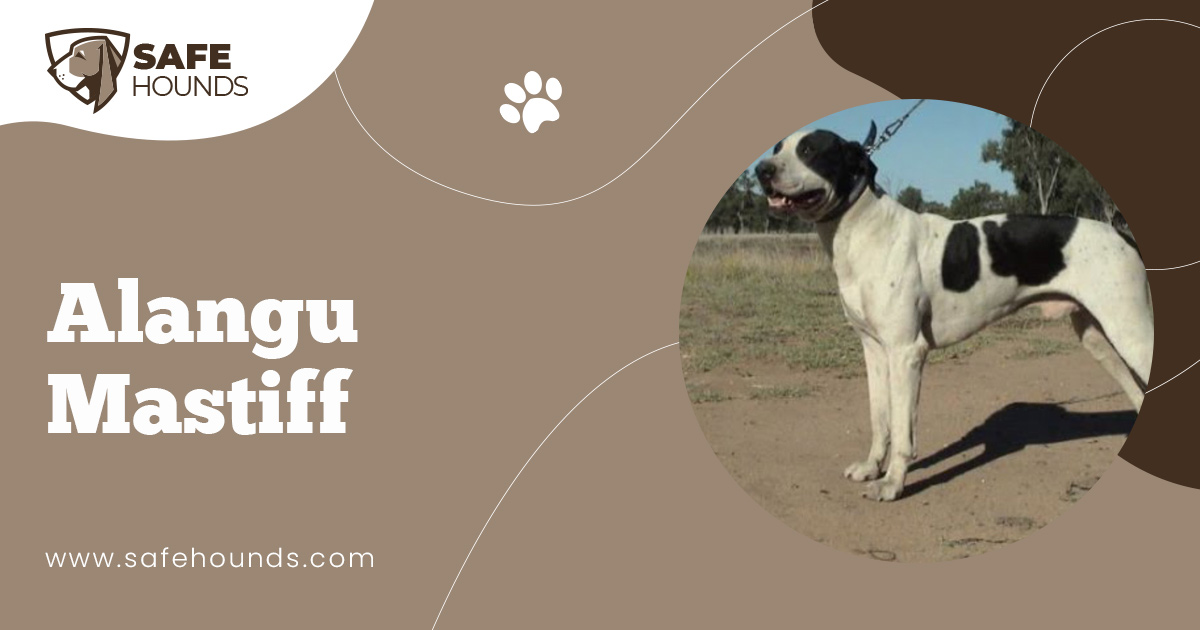 The Alangu Mastiff also known as the Sindh Mastiff is one of the three mastiff breeds found in the areas around Persia and India. The other two breeds are the Alaunt Mastiff and the Assyrian Mastiff. The Alangu Mastiff is an extremely rare breed that originated from southern India. This breed is noted for its alert and protective nature. The breed was in fact considered as the official guard dog of the Persian Army. The dog was utilized to hunt large game. When interest for the breed as a hunter waned, the Alangu Mastiff was developed into fighting dogs. The breed is in fact still used in Pakistan in dog fighting and lumped together with other breeds as Bully Kutta. In Pakistan, all fighting dogs including the real Bully Kuta are known under the same name Bully Kutta. The Alangu Mastiff is one of the most dangerous fighting dogs, one that is believed to be superior to the true Bully Kutta.

This breed of mastiff has a noble carriage. The strong boned and the muscular body gives the dog an impressive appearance. An Alangu Mastiff has a natural guarding instinct. Who wouldnt be intimidated by a massive dog with a large head, powerful jaws and a deep booming voice? An Alangu Mastiff is a dignified breed it manifests an air of grandeur. Unlike other breeds that would amuse an onlooker by being comical and boisterous, the Alangu Mastiff would be disdainful of its audience. Other breeds of mastiffs have developed into docile and affectionate family pets. With proper socialization and obedience training, the Alangu Mastiff can be a family pet too but it is not recommended for a novice dog owner. There is no doubt that this dog will be an effective guard dog. It will announce the arrival of guests. It will not allow intruders to enter the home. But an Alangu Mastiff will need a firm owner, one that will be able to handle the drive and the courage of the dog to confront and accost strangers.

As with any other breed of mastiff, the Indian Mastiff is massive in size. This is a tall breed. Before it was downsized by dog fighting enthusiasts to improve the dogs fighting performance, the original height of this breed is from 30 to 34 inches measured at the withers. These days, an Indian Mastiffs height ranges from 29 to 30 inches. The breed weighs approximately 150 lbs. This is a short coated breed. Coat color varies from solid brown, fawn or brindle. The markings may vary as well. This breed has a flat double coat. The short outer coat is thick, coarse and straight. The undercoat that lies close to the body is dense and short as well. Typically, an Indian Mastiff would have a black mask. The broad skull, the muzzle that is half the length of the skull as well as the ears that are set wide apart high on the skull give the head a rather square appearance. For its massive size, an Alangu Mastiff has small pricked ears. Wide set eyes have an alert expression.

This dog has powerful structures. The neck is medium length but muscular and powerful. It sits into the powerful shoulders and wide chest. The neck and the mouth are covered with loose skin. These solidly built dogs are muscular and big boned. The back is long, the limbs well muscled. The dog has a deep brisket and the tail tapers to a point.

Having been used as war dogs and fighting dogs, Alangu Mastiffs are expected to have a vicious and aggressive personality. These dogs are highly valued as guard dogs because of these well developed traits. These dogs have strong guarding instinct but they are hard to train. This makes the dog unsuitable for first time dog owners. Alangu Mastiffs will not do well in apartments as apart from the massive size, this breed has high exercise requirements that cannot be satisfied by taking the leashed dog for a walk. This is one of the breeds that will need ample space to run and play. These dogs are commonly utilized as guard dogs but they still possess a strong drive to hunt. Apart from being dog aggressive, the Alangu Mastiff will pose a threat to other pets. This breed has gained a reputation for being ferocious and blood thirsty. Thanks to its dog fighting ancestry. However, a properly trained and a well socialized Alangu Mastiff would be a loyal and affectionate pet that will be gentle to the children.

One of the benefits of owning an Indian Mastiff is its low maintenance coat. Alangu Mastiffs are short coated thus they would not need extensive grooming. These dogs are moderate shedders and brushing the coat with a firm bristle brush would be enough to maintain its good condition. A damp towel will remove dirt and bring out the sheen of the coat.

Mastiff the word connotes big, mean and frightful dogs. The mere sight of the dog would generate hysterical fear. A mastiff does not have to bark, the massive size would be enough to make an accosted person tremble with fear. There are different types of mastiffs. It cannot be denied that this breed has a reputation for being aggressive. Mastiffs after all have been used in wars. These massive dogs were also utilized as fighting dogs. A mastiff however, when properly socialized can be a gentle giant. From being the fierce war and hunting dogs, mastiffs were developed, socialized and trained into wonderful companions that double up as protectors of the family. These giant ferocious dogs are no longer utilized in the barbaric custom of bear and lion baiting. These dogs are no longer used as war dogs they are no longer confined in fighting arenas being pitted with other ferocious dogs. If not used as pets, mastiffs nowadays are now utilized as military and police dogs, as guard dogs and search and rescue dogs.

The Alangu Mastiff is one of these ferocious giant breeds. This rare dog breed is commonly found in Thanjavur and Trichy, the districts in southern India. India is the country of origin of this breed thus it also answers to the name Indian Mastiff. The Indian Mastiff is otherwise called Sindh Mastiff as the breed originated from the desert area of Kachchh, from the Bhawalpur area of Punjab and from the area of Rajasthan. The Rajasthan area was once under the Sindh district thus the name Sindh Mastiff was given to the breed. As with any other ancient breed, the exact origin of the Alangu Mastiff is unknown. It was speculated that the breed has existed in ancient India as far back as 486 BC but because of the non-existence of documentation, this fact has never been scientifically proven. It was believed that the breed was introduced into Greece by Xerxes the First in 486 – 465 BC. The Indian Mastiff was speculated to be one of the breeds used by the Persian Army. The breed was in fact considered as the armys official guard dog as it was utilized to guard the soldiers camps. The Indian Mastiff however, was never used to perform suicide jobs. Alexander the Great has repeatedly defeated Persian armies. Alexander the Great has brought back Alangu Mastiffs from India and has ordered his armies to utilize the mastiffs as war dogs.

The Indian Mastiffs were later on adopted and utilized by the Indian royal family. These massive and ferocious dogs were used for the sport of hunting large game. Utilization of the breed as a sporting dog was stopped when the royal family has started hunting with cheetahs. The Indian Mastiff was demoted to performing guarding duties. Because of the inherent aggressive nature, the breed was developed into fighting dogs. From the original height of 30 to 34 inches, fighting enthusiasts have dropped the height of the dog to 29 – 30 inches presumably to improve the performance. The Alangu Mastiffs are still used these days as fighting dogs in Pakistan. The dogs are commonly called Bully Kutta.