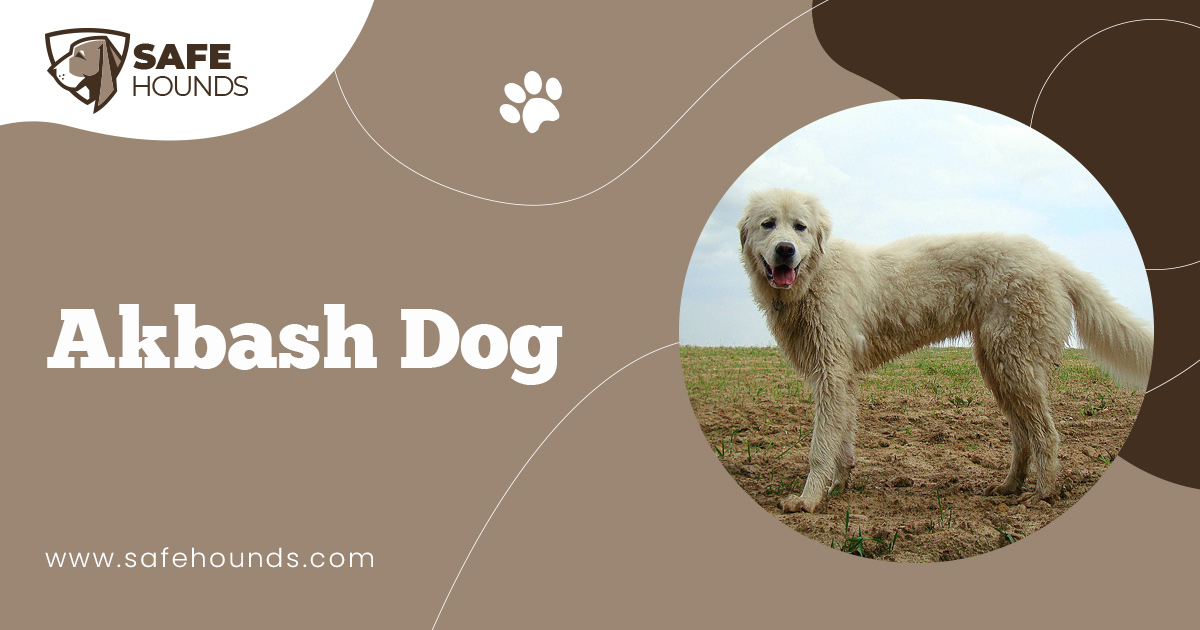 An all white coated dog sporting an iron collar with metal spikes worn over a piece of cloth presumably to protect the neck from chapping is standing on a ridge fastidiously watching over the livestock. The dog is an Akbash, a beautiful native dog of Turkey that is utilized to protect the livestock. If the Great Pyrenees is for the French, the Maremma for the Italians and the Kuvasz for the Hungarians, the Akbash Dog is for the Turkish. These breeds are the white sheepdogs, bred for centuries for the primary function of protecting the sheep from predators.

Turkey has two native dogs – the av kopegi which is a hunting breed and the coban kopegi, a breed of shepherd dog. The Akbash dog also known as coban kopegi has a leaner body as compared to other breeds of Turkish guard dogs. However, this breed is still massive and powerful capable of protecting the sheep from bears, wolves and other predators. Akbash is a Turkish word that means white head. This breeds huge white head has very strong jaws and well developed teeth. This muscular dog has incredible stamina. It is also noted for its capability to run at great speed. These traits were attributed to the mastiff and gazehound ancestry of the breed. An Akbash is a through and through flock guard. However, this breed has a rather unique personality. The dog is docile, even submissive to the livestock under its care but the dog shows dominant aggression towards the two legged and four legged potential predators. This aggression can be a problem especially if the dog will be kept as a companion. An Akbash is a loyal dog that forms a strong attachment to its owner. This breed though is not for a first time dog owner. This dog will need an owner that will understand canine behaviors and one that must have the ability to assume the pack leader status.

If you see an Akbash dog you will be entranced by the outstanding appearance of this breed of livestock guardian. Compared to other Turkish guard dogs, the Akbash has a rather lean body. But in spite of this fact the dog still has an imposing stature that exudes great strength and stamina. The crowning glory of this breed is the pristine white coat. This breed has a double coat – a dense soft and fine undercoat and a long coarse outer guard hair. The thickness of the undercoat depends on the climate and the weather the dog is exposed to. The Akbash Dog can be medium coated or long coated. The coat is weather resistant and non-matting. This breed is a suitable indoor pet since the coat has very little doggie odor. As mentioned the coat is always white but gray or light biscuit shadings can be found in the undercoat and around the dogs ears.

This breed has a massive head, a wide slightly domed skull that tapers towards the long thick muzzle. V shaped pendant ears have slightly rounded tips. Ears are set on rather high. Ears of Akbash puppies are generally cropped in Turkey. This breed has wolf-like jaws and nose. Nose colors can be dark brown or black. Almond shaped eyes are set well apart. Eye color ranges from dark brown to golden brown. The eyes of an Akbash dog have an intelligent, alert though kindly expression. The tail is thick at the base and tapers to the tip. An excited Akbash carries its tail curled over the back otherwise the tail is usually carried low.

The Akbash Dog is a natural guardian. This breed will demonstrate the guarding instinct even at a young age. Although the dog is not as energetic as any other working breeds, an Akbash would appreciate being given work to do. These dogs will thrive best in a situation where they will be given control over the protection of the stocks. Akbash dogs are naturally aggressive well able to protect the livestock from predators. As such, the dog is expected to show an aggressive temperament to strange animals and to strangers. Socialization is therefore very necessary. Surprisingly, Akbash Dogs are gentle and affectionate with their family. These dogs accept other pets of the family too. The dog has an independent nature. Owners must not expect the dog to follow a command with alacrity as the dog would not budge if it thinks its choice is better than the choice of the master.

Akbash Dogs are low activity level dogs. They do not have high exercise requirements. Nevertheless, the dog is not suitable for apartment life. Apart from being barkers, these dogs would need a lot of space to run without the restrictions of a leash. Because the beautiful weatherproof white coat is non-smelling and does not mat easily, the dog would need very little maintenance. This dog is an average shedder. Regular brushing is necessary to accelerate the shedding process.

Turkey is a rich ancient land with a rich history and varied traditions. Turkey is noted to be the land of origin of the progenitors of the famous St. Huberts hounds. The country has made yet another contribution to the world of dog lovers. From this country hails the Akbash Dog, a beautiful all white livestock guardian breed that is highly valued for its excellent ability to protect the livestock from predators. This snow white dog that also forms a strong attachment with its human family is serious in the performance of its tasks. If necessary, the dog will not hesitate to put its life on the line to protect the family and the livestock under its care. Akbash Dogs are noted for their exceptionally developed maternal instinct. This dog not only protects but nurtures young animals as well. An Akbash Dog is allowed by the sheep to clean newborn lambs. This maternal instinct makes the dog a good companion of small children.

The Akbash Dog was believed to have been developed 3000 years ago. This dog was selectively breed by sheepherders who wish to have a white dog that will be easily distinguished from wolves and other wild animals. These white livestock guardians are seen in the mountain pasture lands and in the plain of western Turkey but the origins of this impressive breed are quite obscure. The Akbash Dog is believed to be an ancient pure breed that is the Turkish counterpart to the other breeds of white guardian dogs in the northern Mediterranean Basin. These guardian dogs are the Great Pyrenees of France and Spain, the Maremma dogs found in Italys Maremma Mountains and the Kuvazs of Hungary. The Akbash Dog though is different from its white coated cousins because it manifests a rather unique combination of sighthound and mollosser characteristics. There was a theory that the Akbash Dog is the progenitor of the other white coated livestock guardian dogs. A dog with a similar build to the Akbash Dog was portrayed in a Phrygian civilization grafitto. The dog is wearing a spiked metal collar around its neck. This gives rise to the speculation that the dog was brought by the Romans from Asia Minor to Italy. Archeological evidence of the civilizations in the areas presently occupied by Iran, Syria and Turkey suggests the fact that animals were domesticated 10,000 years ago. As such, dogs were developed to protect and care for the livestock. However, there was no conclusive evidence that the Akbash Dog spread from Turkey and became the progenitor of the other white coated livestock guard dogs.

The Akbash Dog has remained for centuries in the villages of western Turkey, protecting the homestead and the livestock from predators. These impressive breed was introduced to other dog loving countries in the 1970s. Americans Judy and David Nelson extensively studied this native dog of Turkey. About 40 Akbash Dogs were imported to the United States. These imported Akbash Dogs became the foundation stock of the dogs now found in Canada and in United States. The Akbash Dog was introduced by the US Department of Agriculture to the countrys Predator Control Program in 1980. In 1998, the Akbash Dogs was officially recognized by the United Kennel Club.