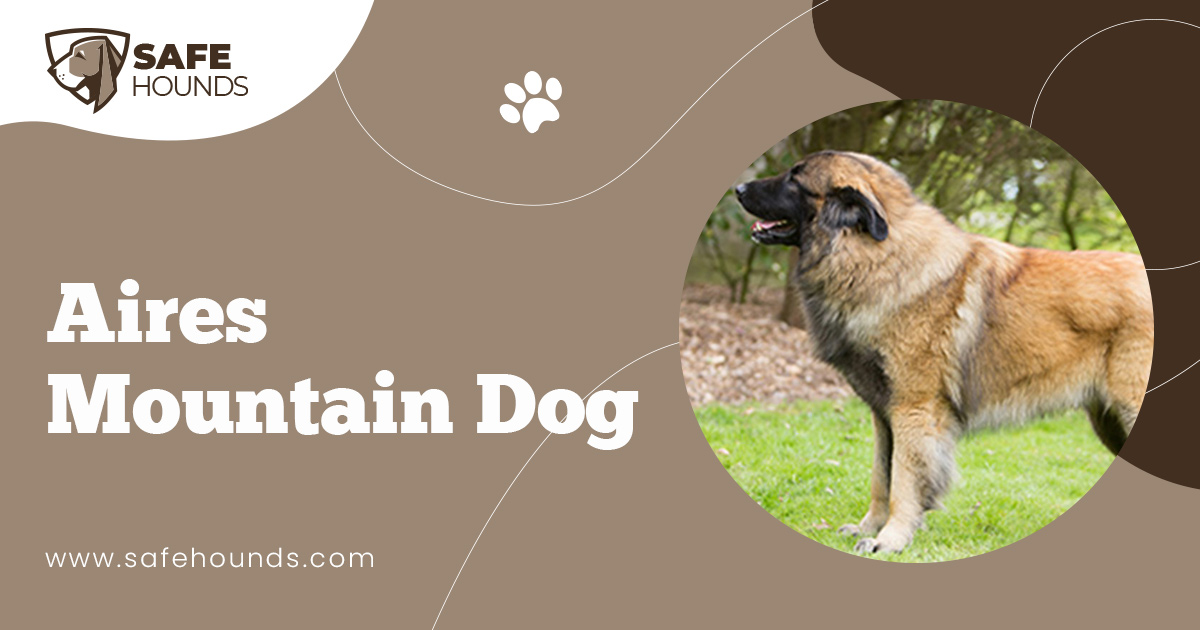 The Aires Mountain Dog is affectionately called the macaque dog in Portugal, its country of origin. This is because of the rustic and monkey-like appearance the dog has brought about by the smooth, long and wavy hair that forms a moustache, a beard and long eyebrows that does not cover the eyes. This coat protects the dog from potential wounds and from the scorching rays of the sun. The big nose with large nostrils and the happy disposition of this breed earned it the nickname monkey dog.

The Cao da Serra de Aires as the breed is called in its country of origin is considered to be a very distinct breed for the reason that it does not have a mat prone undercoat. This simply means that if you have this breed for a pet you will not be faced with the tedious and time consuming coat brushing to avoid the matting nightmare.

This breed is mainly utilized for herding goats, pigs, horses, sheep and cows in the wide plains of the Alentejo region and the Rebatejo regions of Portugal. This is a hardy breed that has adapted well to extreme weather conditions – a hot and stifling dusty summer and windy and freezing winter. This is a very capable and dependable herder of livestock. These dogs would perform their duties devotedly, would stand guard to keep the flock together and bring back strays. The Aires Mountain Dog is considered to be one of the best shepherd dogs.

The Aires Mountain Dog is a boisterous and easy going breed that always aims to please the master. This breed makes a wonderful home companion. This is a highly trainable dog, very playful but is known to behave quietly inside the house. Outside the home the dog would be very active and energetic. However, forever loyal to its masters, the dog would never venture too far from the human family. This breed would take about two to three years to fully mature both physically and emotionally.

The Aires Mountain Dog is popular in Portugal but it is considered to be a rare breed in Europe. Outside Portugal the breed is simply called Portuguese Sheepdog.

The Aires Mountain Dog is quite an unusual breed. This is the only breed of sheepdog that does not have an undercoat. Apart from the monkey-like liveliness of the dog it also has a quaint look that resembles that of a monkey. This is probably the reason why the dog is dubbed as the monkey dog in its country of origin. The long smooth coat of this breed has a slight wave. Hair of goat-like texture and of medium thickness covers the head and the entire body of the dog. The same type of hair grows on the legs and between the toes of the dog. Longer hair covers the head forming bangs and a beard that makes the dog look older and untidy. Coat colors would range from yellow, fawn, chestnut, wolf grey and black. The coat can have tan markings. A white patch may be present on the chest of some dogs.

This breed has a strong broad head, a muzzle that is straight and almost cylindrical and a slightly raised nose. The nose has large nostrils. Black or a darker color than the coat is the preferred color for the nose. This breed has a tight, firm and almost straight lips. Dark colored round eyes has a lively expression. Natural ears are set on high and hangs down the sides of the cheeks without folds. Cropped ears should be straight and triangular in shape.

An Aires Mountain Hound is a moderately sized breed but for its size, the dog seems to be quite high on the legs. Strong legs and feet enable the dog to adapt to the rough terrain. The back of an Aires Mountain Hound is straight and long, the chest is deep and of medium width. The tail is set on high, pointed and tapers towards the base. The tail is carried between the legs with a curved tip when the dog is relaxed and rolls up or fans out when the dog is in motion.

An Aires Mountain Hound is considered to be one of the cleverest all purpose sheepdogs. It is a known fact that the dog would only care for the livestock and for its master. The dog not only herds but it also protects the livestock. It would manifest its cleverness and agility in bringing back strays. This breed is known for its eagerness to work.

The Aires Mountain Hound makes a fantastic home companion as the dog forms a strong attachment to the family. The breed is known to love its master above anything and as such would always be eager to please the master and his family. These dogs are gentle with the children and are known to tolerate dogs and other pets. However male Aires Mountain Hounds are known to be possessive of their territories. This breed makes a good watchdog as they are known to be wary of strangers. Training and socialization is necessary to curb the dominant attitude of the dog. However, this breed can be hard to train. The dog is intelligent and learns quickly but the trouble is that the dog can be stubborn. Training the dog has proven to be quite challenging for shepherds. Consistent and firm training will make this breed respond. A well trained Aires Mountain Dog owner can not ask for a more reliable and obedient dog.

The Aires Mountain Dog may have an active owner that ensures that the dog is sufficiently exercised but this breed will still not be suitable for apartment living. This is a working dog, one that is accustomed to living outdoors. The dog may occasionally enjoy being inside the home with the family, would remain calm and quiet inside the house for a while but the dog would hanker to be outdoors where it can run and roam freely.

The dog may have a long wavy hair but it does not have an undercoat. This means that it is free from mat formation. Unlike other long haired dogs that would need extensive grooming this dog would not appreciate too much coat brushing as it can mar the texture and the natural rough look of the coat. An Aires Mountain dog should not be bathed frequently so as not to remove the natural oils that moisturizes the skin. This natural oil keeps the coat shiny and it makes the coat water repellent. Frequent bathing will also dry out the skin. Rubbing the dogs body with a damp towel is an alternative to bathing that will effectively remove dirt. Ears must be checked at least once a week and nails must be trimmed every two weeks.

The Aires Mountain Dog is quite an unusual type of sheepdog among all the other shepherd dogs this is the only breed that has no undercoat. The dog was nicknamed the monkey dog as apart fro the quaint features that resembles that of a monkey the dog also has a monkeys happy and lively disposition.

This breed originated in the southern plains of Portugal is considered to be about 100 years old. It was believed that this breed have descended from the 2 Briards that were imported by Conde de Castro Guimares in 1900s. The breed bore a striking resemblance to the herding dogs of Catalan and to the Berger des Pyrenees and it was speculated that these breeds were the ancestors of the Aires Mountain Dog.

For years this breed has existed in the southern plains of Portugal in the company of poor shepherds. This breed has always been a part of the farming operation as it does not only herd sheep but also cows, goats, pigs and horses. The dog has also developed into a valuable balance tempered home companion, a pet that values the master above all else.

The breed is still considered rare, unknown outside its country of origin. In 1970s the numbers of Aires Mountain dog was tremendously decreased. The breed was on the brink of extinction. Fortunately, because of the beautiful coat and the appealing docile and happy disposition, Portuguese dog lovers have undertaken the revival of the breed.

Breed standard was recognized by the Clube Portuguese de Canicultura in 1932.