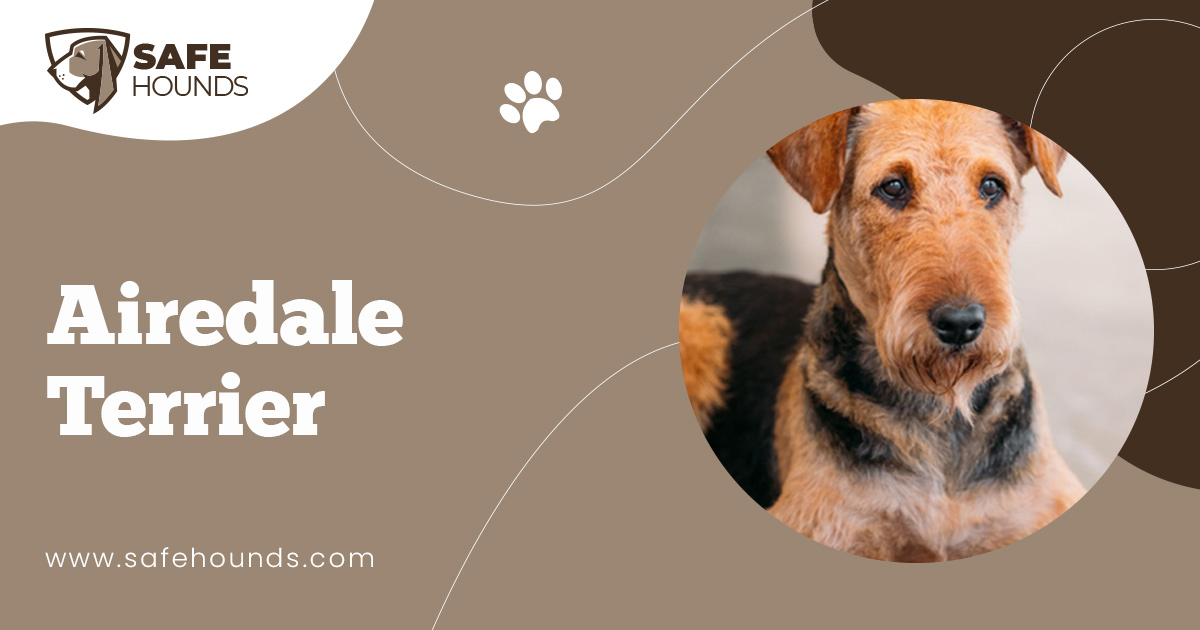 The Airedale terrier is the largest of all the terriers, originating from the Aire valley in Yorkshire, England. He is commonly referred to as the King of Terriers because of his size. Other popular names given to the Airedale terrier include Bingley Terrier and Waterside Terrier. The waterside name originated, because it was bred to hunt otters.

The Airedale as with other terrier breeds has wiry hair that seems quite unmanaged, with a soft fur undercoat. The coat as specified by the AKC should be a black saddle, with a tan head, ears, and legs, or a dark grizzle saddle, which is black, mixed with gray and white.

If you have small children and wish to bring an Airedale terrier in your home, you should be aware they tend to play a bit rough. The best way in which to introduce an Airedale to the rest of the small kids is to do so when they are puppies so they can have early exposure and socialization instead of trying to force a grown terrier to adjust to little ones.

The one complaint of most Airedale terriers is they believe they are not as loyal as other breeds, however, this is a misconception. They love to please their masters however, their attention span for other things in the area can be very distracting such as food, a squirrel running through the yard, or even a neighborhood dog passing by.

The Airedale Terrier is the largest of the terrier breed with a height of 22 to 24 inches for boys and 22 to 23 inches for girls and weighing between 50 to 65 pounds for boys and 40 to 45 pounds for girls. As mentioned above the color of their wiry hair is black saddle, with a tan head, ears, and legs or a dark grizzle saddle, which is black, mixed with gray and white. The legs up to the thigh, chest, head, ears, and underside should be tan. In some cases, the tan coloring can extend to the shoulders. They have a wiry topcoat with a soft fur type coat underneath.

The Airedale stands square with straight front legs. The feet are small, round and solid with a good pad with toes that are slightly arched, neither in nor out.

The head is long and flat with v-shaped ears that gently fold either to the side or the front. The nose is black. Their tail is normally docked and is carried high. In the US it is a requirement for docking within five days of birth, however, in the UK it is illegal to dock the tail of a dog except in the case of benefiting the dog, such as if the tail is broken.

The foreface is strong and muscular with dark, small eyes that are not prominent. They should express the terrier personality of cleverness and enthusiasm. The teeth are usually a bit overlapping with a scissor or vise like bite. The lips are tight.

The Airedale Terrier is a very energetic dog that is courageous, intelligent, loyal, sensitive, and protective. He can be friendly with strangers and is not aggressive. The Airedale tends to play a bit rough and is not recommended for young children unless they have grown up together. They need to feel like just like any dog, but they also have to feel respected.

As puppies, they love to play and enjoy your training. Some people confuse their curious natural as a sign of disobedience, however, this is not true. The Airedale can be distracted by other things in their area such as food, other animals, and of course children playing. In order to keep the Airedales attention you will have to be a top-notch trainer when it comes to squirrels or other playful items nearby. Unless they are trained they will remain a bit rowdy, however, they take to training like a champion. Since they love to please and desire respect, training will be easy as long as you are persistent and use a variety of training methods, as they tend to ignore the same command after it is repeated over and over again.

The Airedale terrier enjoys other animals in the household including cats, however, they may try to dominate other dogs unless trained properly.

The Airedale because of his size and his activeness he is not recommended for apartment life. He will enjoy a medium sized yard in order to play and run.

Terriers tend to have dry and itchy skin, which can be helped by using supplements of certain oils and kelp. High quality foods including lamb and rice are top of the list. Airedales are prone to hip dysplasia and research has indicated feeding puppy food longer than recommended could be one of the reasons to increase the Airedales chances of this disorder. Switching to adult food should occur between 8 to 10 months of age.

Since Airedales have wiry hair they do not shed like many other breeds, however, they do require brushing on a daily basis. Their coats are not really trimmed, as you would imagine their coats are normally stripped and trimmed. This is best to allow the groomers to perform unless you know exactly what you are doing. Plucking is also recommended every two years. The beard should be washed daily because like a mans beard, food tends to fall and remain.

The Airedale likes to dig, run, and play. When you are preparing your back yard, these things should be taken into consideration. Exercise is a very important part in the care of your Airedale. They tend to become bored easily and need a variety of activities such as daily walks, playing ball, and swimming. After the first two years, they will mellow just a bit.

The Airedale was born in the region Airedale of West Riding of Yorkshire. The breed was created in the middle of the 19th century by the working class that crossed the old English black and tan terrier with the Otterhound. The Kennel Club of England recognized the Airedale Terrier breed in 1886.

The Airedale was known as the multi-purpose terrier able to scent game, be broken to gun, and retrieve the game. He was also an excellent guard for the home and farm. In some cases, he was used in poaching game from the large estates. The Airedale could be taught not only to fetch game, but to pursue game, kill it, and bring it back to their masters.

The Airedale was a major part of World War II in which their duty was to carry messages to soldiers behind enemy lines and transport mail. The Red Cross even used Airedales to aid in finding wounded soldiers on the battlefield.