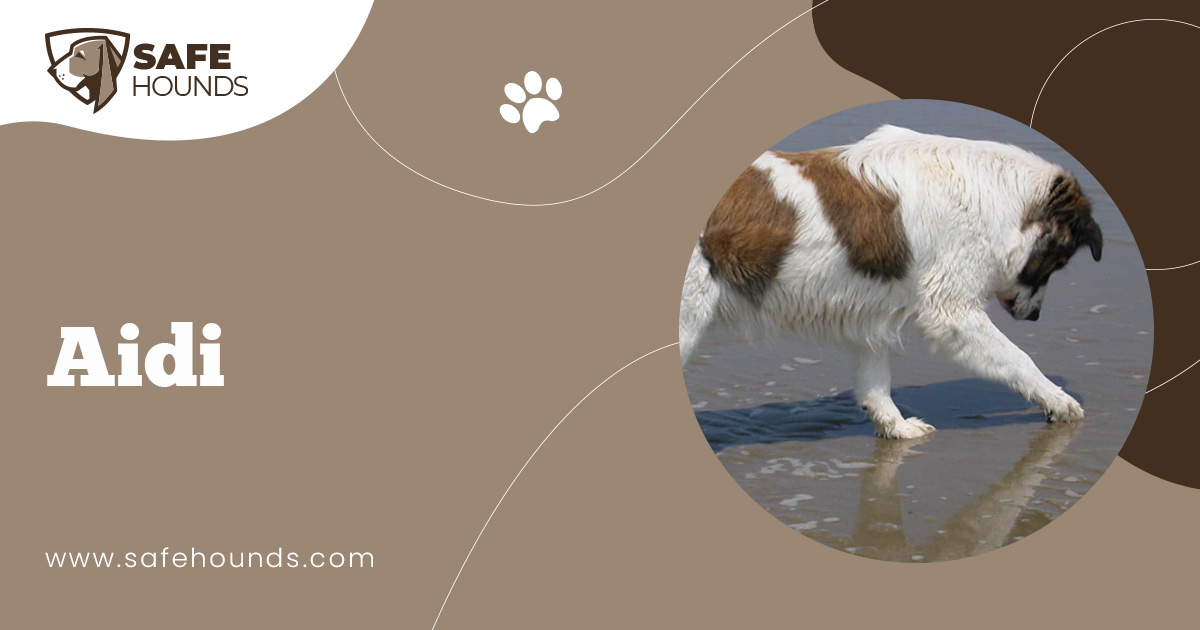 The Aidi or the Chien de IAtlas is an outstanding watch dog that originates from Morocco. The dog has exceptional guarding abilities that make it an excellent and dependable guard of herds of goats and sheep. This is an ancient breed of dog having existed for more that five thousand years in the mountains of North Africa living with the semi-nomadic people of the Atlas Mountain where the dog is depended upon to protect the family as well as the property from bears, wolves, jackals and other wild animals. This is an alert and independent thinking dog that is always ready for action. The dog has a keen sense of smell that can detect and track snakes. Because of the heightened olfactory senses, the dog is often paired with the Sloughi. The Aidi scents the prey and the Sloughi will run and chase for the kill. This is a hardy breed with exceptional tracking and hunting ability. The Aidi is an agile and sure footed dog that can scale rocky outcroppings while tracking a prey.

Similar to the Akbash and Karabash, the sheep dogs of Turkey, an Aidi is considered to be a sheep dog too. However, these dogs do not herd sheep as their main role is to protect the sheep from predators. Because of the dogs attentive and aggressive nature they are most valued for their ability to protect the camels, the tents and the properties and belongings of the nomadic tribes. Aside from the well balanced and brawny body, the coat serves as protection when the dog fights with jackals and other predators in line with their dog guarding duty. This coat allows the dog to withstand extreme temperatures-freezing temperature at night and the scorching heat of the day.

The Chien de IAtlas a.k.a Aidi is also referred to as the Berber dog, Berber being the group of indigenous people in North Africa where the dog can be commonly found. Having lived with this nomadic tribes of the desert, the dogs have developed their muscular bodies and strong constitution to be able to bear up to the most rigorous weather conditions, develop the agility and the prowess to hunt as well as the ferociousness to face the predators that pose harm to animals and property.

The Aidi is a rugged, muscular and solidly built dog that shows a powerful demeanor. This is a large dog, an adult Aidi measures from 21 to 25 inches in height and weighs 50 to 60 pounds. The dog always has an alert and vigilant expression, very true to its nature of being an outstanding guard both of man and animals.

The dogs bear head is well proportioned to the heavy muscular and well balanced body. The muzzle similar to the head is conical tapering to a nose with well opened nostrils. Nose can either be black or brown depending on the color of the coat. Lean tight lips also take the color of the dogs coat. Medium sized dark colored eyes have well pigmented eyelids and have a lively, alert and searching expression. Medium length ears with somewhat rounded tips are obliquely set, often tipped forward and appeared to be semi drop when the dog is alert and laid back when the dog is relaxed.

The dog has a long tail that is set as an extension of the loin. Bushiness of the tail signifies that the dog is a purebred. The tail carried low with a curve when the dog is at rest. The tail is carried gaily when the dog is on the move but never curled over the back of the dog. Some specimen have cropped ears and docked tail although the natural condition of the tail and the ears are preferred.

The Aidi has a very thick long hair. Hair that is about 6 cm. covers the entire body except for the face and the ears that have shorter and finer hair. Long hair also covers the buttocks as well as the tail making it very bushy. Long hair on the neck and on the throat forms a mane. This is more evident on male dogs. The thick long hair serves as an armor that protects the dog when fighting with predators. In the same manner, the dense coat enables the dog to withstand freezing and scorching temperature. Coat colors would range from fawn that can be brindled with black, brown that can be beige to dark brown and black and white.

An Aidi is inherently protective. For centuries the dog has protected the animals and the properties of nomadic tribes. These are energetic and highly strung dogs. Contrary to what most dog experienced people believed, the Aidi can and have proven to be wonderful family pets. The dog makes an excellent protector of the family, gentle with children especially if socialized while still young. The dog however would need a strong and firm alpha male as it tends to be aggressive to other people and animals. The dog should have a kind and firm training.

An Aidi is a clean dog that is relatively inactive indoors. These are working dog that would require plenty of exercise. An Aidi is a barker too. This makes the dog unsuitable for apartment dwellings. The dog would also need to have tasks for mental stimulation to prevent boredom. A bored Aidi becomes a destructive Aidi. The dog would be in its element if allowed to live in a mountainous country but if that is not possible a home with at least a ¼ acre yard with a 5 foot fence will suffice.

The Atlas Mountain dog has a weatherproof coat that sheds heavily twice a year. The hair grows to about 6 cm, it would need to be brushed weekly to remove burrs and dirt. Regular brushing distributes the natural oil of the coat therefore promoting its good condition. Coat must be brushed more often during the shedding season to hasten the shedding process. Bathing the dog should be done twice or thrice a year so as not to remove the weatherproofing of the coat.

The origin of the Aidi like any other ancient breeds of dogs is not properly documented. Some believed that the dog was brought by the Phoenicians. It was also believed that this dog is the original ancestor of the Pyrenean Mountain Dog. This fact though was refuted by dog experts as they believed that no sheepdog breed existed in the Atlas Mountains. The Aidi was speculated to have originated from the Sahara. This bred of sheepdog is also called the Berber dog as it has existed with the Berber nomadic tribes.

The Atlas Mountain Dog is believed to have existed in the North African mountains, being the protective guards of the nomadic tribes thousands and thousand of years ago. These courageous dogs have protected the family, flocks of sheep, the tents and the properties of these nomadic people from predators. These dogs are known as sheepdogs but they never herd the flocks of sheep. Their main role is to protect the sheep from jackals and other predators. This breed has a strong scenting ability that can scent approaching predators.

This excellent olfactory sense enables the dog to scent prey. However, the Aidi is not very agile and it is not uncommon to see a prey escape. This is the reason why the Aidi is often paired with the swiftly moving and agile Sloughi. This became a lethal hunting combination.

Today the Atlas Mountain dog is still guarding the flocks in the remote area of the North African mountains. The breed has also developed into outstanding home companions, a dog that has a keen sense of smell and always ready to protect and defend the family.