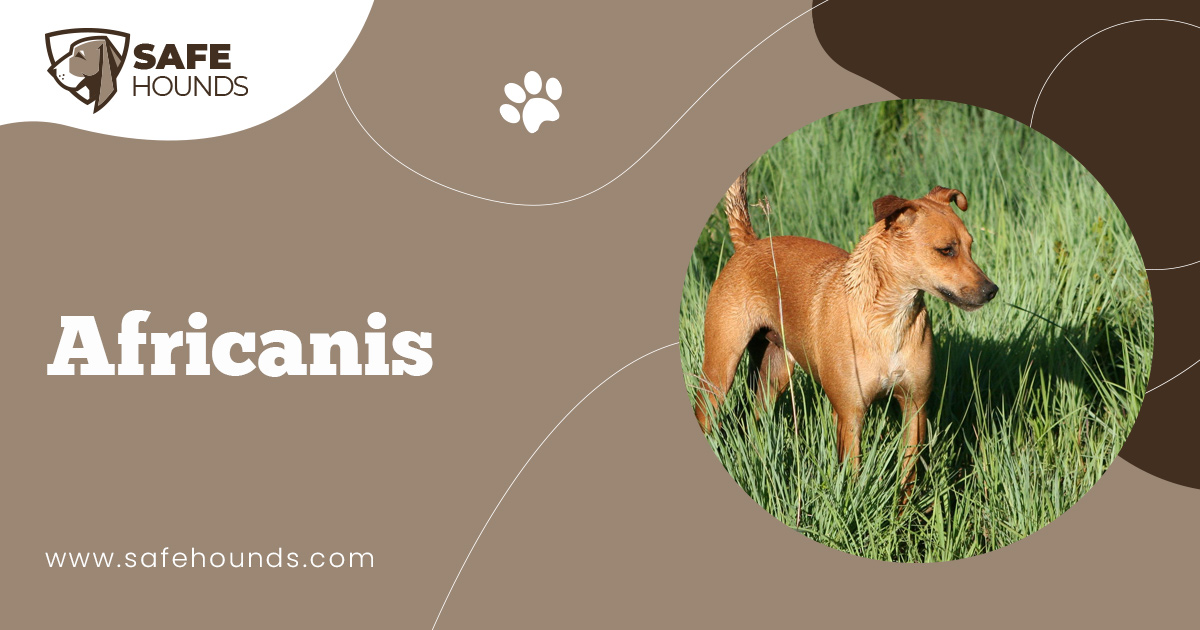 A medium sized dog with a slender but well muscled body is a most common sight in South Africa. These dogs are seen roaming around the villages. With supple and graceful movements, these dogs are seen running at great speed in the dirt roads around the rural settlements. These dogs are believed to have been around since 800 AD and have been the intelligent and loyal companions of the Southern Africas bushmen. These dogs are the Africanis. Africanis are highly valued by the indigenous population of South Africa not only for its hardiness and hunting ability but also for its intelligence and loyalty.

The Africanis are dubbed as the dogs of Africa. The name is a combination of Africa, for the continent and canis for dog. Western breeds of dogs were specifically bred and selected to attain a specified appearance. Human intervention made possible for these western breeds to fit the required breed standard. The Africanis though is a result of natural selection. The dogs physical and mental attributes have adapted to the harsh environmental conditions of the continent. As such Africanis differ in appearance. It also answers to various names in different languages. This is why the Africanis is not considered to be a distinct breed. The name Africanis though covers all native Southern African dogs. Only the fittest dog survives the harsh Southern African terrain and climatic conditions. This has made the Africanis one of the worlds hardiest natural races.

The Africanis was once considered to be mongrels. In fact Umbwa wa ki-shenzi, the Shawili name for these dogs means traditional dog or mongrel dog. The dogs after all vary in appearance and are found in a wide range of colors. The mongrel stigma was removed when the dogs were extensively studied by Johan Gallant and Joseph Sithole. These dog experts roamed the villages, studied and photographed the dogs they found in kraals and homesteads. These dogs that may differ in appearance have the same behavior thus it was concluded that they come from a coherent race.

Africanis is a name given to all Southern African native dogs. These dogs may vary in appearance but basically these medium sized dogs have a short coat that comes in a wide range of colors. Any color and color combinations are acceptable. The short coat is harsh and thick. The limbs and the head are covered with even more shorter hair. As mentioned, these dogs vary in appearance. An Africanis can also be wire-haired. The Africanis is noted to be an excellent hunter. The dark loose skin prevents the dog from sustaining serious hunting injuries. The loose skin makes sure that the muscles and tissues remain intact. The dog may or may not have markings. A distinct characteristic of the breed is the irregularly formed ridge that is commonly seen at the back of the dog. Ridged individuals are not suitable for breeding as the mutation was attributed to a dermoid sinus.

An Africanis has an elongated wedge shaped head that gives the impression of strength. The flat skull is moderately wide between the ears. This landrace has a slight stop, a wedge shaped muzzle that is of the same length as the skull. The rather large pointed nose is usually black. Medium to large oval eyes can be yellow or black. The black rimmed eyes give the dog an alert and intelligent expression. V shaped ears that can be erect or drooping are very mobile. Medium thick tail is thickly coated. Similar to the ears, the tail is functionally mobile and the way it is carried depends on the mood of the dog.

The Africanis is highly valued as a hunting dog but it can not be denied that it is a good house pet too. The dog may not have the flashy and rather pushy behavior of most companion dogs, it may not have other dogs cravings to be constantly hugged and petted but there is no question to the loyalty and devotion this dog gives to its people. Africanis have an unobtrusive personality but because these dogs are territorial, they can be very aggressive when they are defending the homestead, the livestock and most especially the family. An Africanis does not need obedience training. The dog is inherently obedient, it recognizes its pack leader naturally.

The Africanis will thrive well in an environment that will somehow match its natural habitat. These hunting dogs are fast runners. They are accustomed to the wide open spaces of the Southern Africa. A home in the country or in a rural area is the most suitable location for this breed. The Africanis is an easy to care for dog. Unlike other companion breeds, this dog does not need pampering and special foods. The harsh African environment has honed the dog into a tough animal with powerful endurance. Although this breed is noted to have an innate resistance to parasites, it would still benefit from routine vaccinations. As with any short haired dogs, the Africanis would not need extensive grooming routine.

The Africanis is considered to be the real African dog. This dog that was shaped in Africa was specifically developed for Africa. This hardy dogs form a part of the biological and cultural heritage of the African continent. The wolves are the progenitors of dogs. This theory was supported by genetic evidences. From being wild animals that hunt to survive the wolves have slowly gravitated towards the settlements in search for food scraps until these animals were domesticated and became mans best friends. However, it was proven that canine domestication never took place in Africa. There were no wolves in Africa and it was believed that the Africanis have descended from the dogs that were domesticated in the East. These dogs were already established in Egypt as early as 4700 BC. These dogs are believed to have arrived with the Stone Age traders that exchange goods with the people living in the Nile Valley and in Sudan. Seasonal migrations have spread these dogs deep into the Sahara.

The domestic dogs that are believed to be the ancestors of the Africanis first arrived in South Africa with the Iron Age Bantu speaking people. These migrations passed along the Central Rift, Lacustrine region, Zambia and Zimbabwe. The migrations travelled through Botswana to finally arrive in South Africa. The veracity of the theory was established when remains of domestic dogs that dates back to 570 AD were found in the Botswana border. By 650 AD, these house dogs are common sights in the Lower Thukela valley and by 800 AD these dogs have become permanent fixtures in a Cape St. Francis Khoisan settlement. For centuries the dogs have adapted to the varied climatic conditions and the terrain of Southern Africa. Through natural selection, the Africanis was developed from the exclusive gene pool of the domesticated dogs from the east. However, there was a concept that the traditional and pure Africanis blood was tainted by the blood of dogs brought by Portuguese explorers, Arab traders and Eastern seafarers. However, this idea was argued by dog experts, believing that other canine influences have probably happened after Transkei and Zululand were colonized in the 19th century.

The Africanis are still found in their natural habitat in tribal communities where people are maintaining their traditional life style. Change however, has come to Southern Africa. Ownership of the traditional dog was overpowered by the interest for exotic foreign breeds of canines. Somehow these facts have affected the existence of the Africanis. The Africanis Society of Southern Africa was established to conserve the ancient gene pool of the breed that was noted to be the dog of Africa.