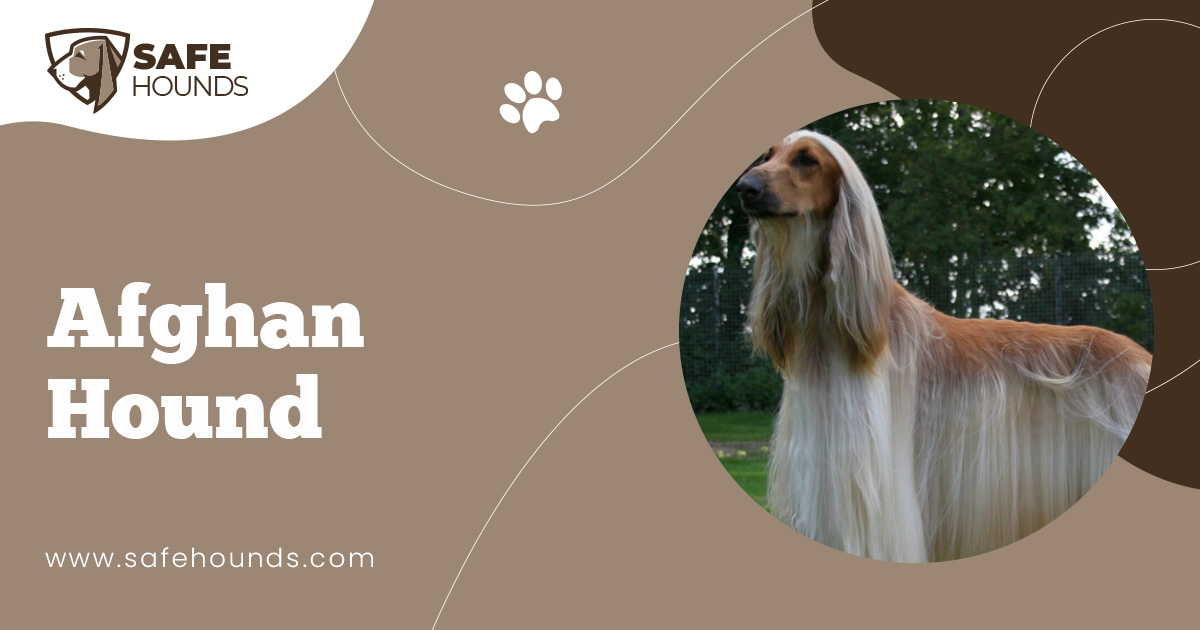 The Afghan Hound also commonly known to us as the Baluchi Hound, Sage Baluchi, Tazi, and Ogar Afgan comes to us from Afghanistan. The Afghan Hound has a coat that is long and fine and comes in a variety of colors. He is known for his very high activity level, being a bit slow to learn, but with a lively yet reserved temperament.

He is not known for being a great guard dog but as a watch dog, he is a prize. The Afghan loves wide open spaces along with running and playing. They need plenty of exercise so an active family will do great with an Afghan as long as they include him or her in their fun outdoor activities. At one time, the Afghan had a reputation of being disobedient and even untrustworthy, however, this is not the case if trained properly. Remember, though, they do enjoy wide open spaces and plenty of running space.

Afghan Hounds are normally very healthy, however, they do tend to have a low tolerance to pain, and thus even a small wound can be very painful. If you allow them to run and play on their own outdoors, you should check the area for rocks, twigs, or other items that can cause pain to the pads of their feet.

The aristocratic Afghan Hound stands at around 25 inches to 27 inches and weighs between 50 and 60 pounds. The females are always smaller than the males. As soon as someone catches a glimpse of the Afghan, the only thing they can think is dignity and aloofness. He carries his head proudly with gazing eyes.

His coat can be any color for the show ring, with white markings on the head are not desirable. The most popular coat color is a sand color with a darker colored face and ear tips. Even though all colors are accepted, white is frowned upon in the show rings.

The coat is thick and silky while being fine in texture on the hindquarters, flanks, forequarters, ribs, and legs. His ears and feet coat is well feathered from the front to the shoulders and backwards from the shoulders. the hair in this area is short which forms a smooth back. The most impressive feature of the Afghan is the topknot of long and silky hair.

The muzzle is known as the Roman nose, which has a slight convex. If there is a stop, it is only slight. The teeth will meet in either a level or a scissor bit. The Afghan has a black nose with dark almond shaped eyes, and ears that lie flat against the head. His should have a long, strong, and proud neck to enhance his regal appearance.

The hipbones are prominent with strong and straight front legs. The feet will be large to accommodate his size, which is covered with long hair. The tail has a ring at the tip that is not carried over the back.

The Afghan Hound is a sweet, affectionate, loyal dog along with being quite sensitive. They are considered to be elegant and courageous, with being a bit leery of strangers but not hostile. they may act on the tough side, but do need love and attention or will pine away. Some consider the Afghan to have cat like tendencies, which can be hard to train if not trained with tender loving care instead of a rough training session.

They do love to play with children, however, their large size may not be suitable for young children. The children should also be kind and not rough play. Some Afghans have been known to be on the timid side and high strung, however, in most cases with proper training this personality can be avoided.

Apartment life is not for the Afghan, as he needs plenty of room to romp and play in his own yard. When kept indoors they become inactive. They really enjoy the outdoors even though they prefer to sleep indoors with the family.

If you do plan to keep the Afghan Hound indoors he will require at least 30 minutes of romping every day without being on a leash.

When it comes to grooming, he will a need a bath at least once per week. The most important thing about his coat is that you do not want to brush it between bathing. When you brush the coat dry, it can damage the coat, which can make it mat easier.

The Afghan Hound is another of the ancient dogs, which is native to Sinai. This unique and regal dog was mentioned many times on Egyptian papyruses and has been seen carved inside the caves of northern Afghanistan, which date back to over 4,000 years ago.

DNA testing of today has proven the Afghan to its original native name of Tazi, which has a connection to the Tasy breed from Russia.

The Afghan Hound was kept in Afghanistan for centuries while the Afghan people refused to sell their national dog to outsiders, thus keeping his heritage pure. In the early part of the 20th century, a few made their way to Europe and the United States.

The Afghan Hounds history was in being a sighthound for shepherds and hunters for all kinds of game including deer, wild goats, snow leopards, and wolves. In some cases, they were also used as watchdogs.

The American Kennel Club did not recognize the breed until the 1930s. In Europe and the United States, the Afghan is not used as much for hunting as it is for a pet. However, the Afghan has used its talents in the past for such things as herding, hunting, lure coursing, racing, sighting, tracking, and watchdogging.

Korean scientist Hwang Woo-Suk announced that his team had successfully cloned a dog. The dog was the Afghan Hound, Snuppy, was the first cloned dog in history. Other famous Afghan Hounds include Rita from Oliver &amp, Company, Sylvie from Balto, What-a-Mess, and Brainy Barker from Krypto the Superdog.

The last breeder/owner/handler to win Best in Show at the Westminster Kennel Club Dog Show with an Afghan Hound was Chris Terrell in 1983 along with his dog Ch. Kabiks The Challenger. This was also the last time any dog in the hound group was been award Best in Show. The Afghan Hound has only take the top honor one another time and that was in 1957 at the WKC Dog Show.