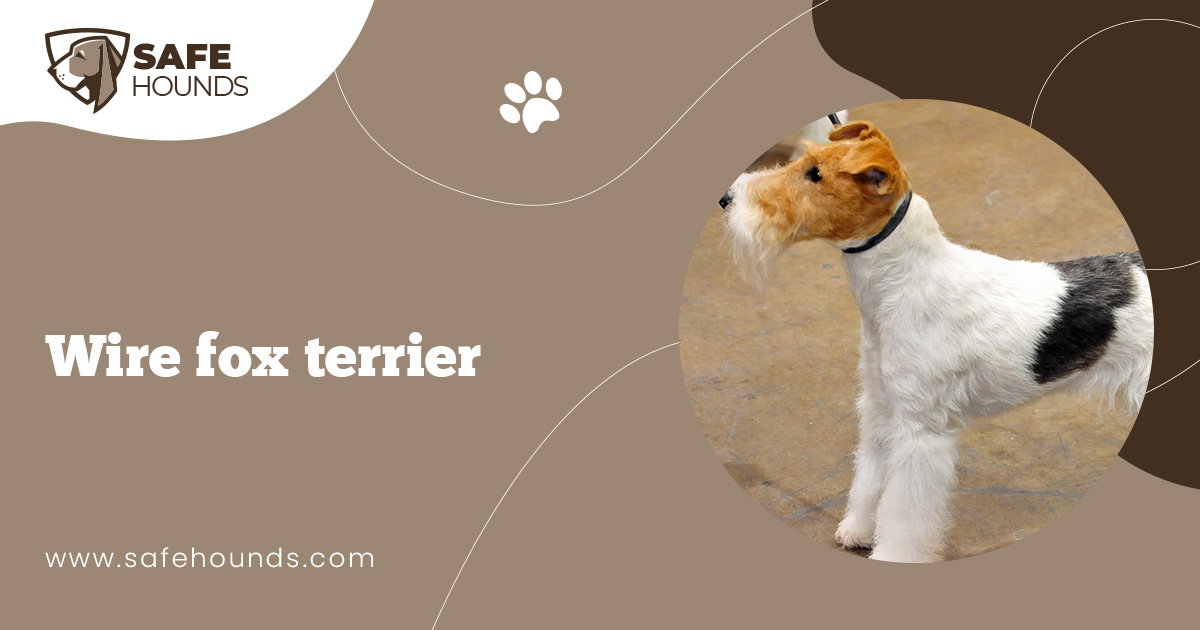 The Wire Fox Terrier is possibly one of the most aggressive breeds of terrier that a pet owner can choose. While this does not disqualify it as a suitable pet for the home and family, it definitely means that it is a dog that ideally does require some experience with dogs to own. In the hands of a knowledgeable and experienced dog owner they can be a true joy to own and will be a guaranteed source for non stop entertainment and amusement. They are known for their affectionate playful dispositions, as well as their capacity for mischievous behavior due to their high level of intelligence

Their name is derived from the fact they have a rough somewhat wire-like coat that is usually white with black and brown over markings. They also have an unusually longish head that has a bushy mustache-and-beard growth of hair at the snout that tends to lend it an odd distinguished look. This dog is truly a rambunctious easily bored breed that is ready for action at all times and left to its own devices can create havoc in and out of the home.

It will chase and kill small animals including cats and birds and will fight other male dogs regardless of their size or the possible outcome of the contest and these behaviors are the norm not a rarity. This means that the Wire Fox Terrier must undergo extensive obedience training beginning from the time that it is brought home as a puppy. Also, this training must be part of an ongoing process throughout the entire life of the dog.

One thing that can be done to make owning one of these dogs a lot easier is to have it spayed or neutered, unless of course you are planning on breeding your pet. However, if this breed of Terrier is properly trained and kept in a secure backyard by an attentive and loving family, they do make wonderful affectionate pets that are willing to play with children any time day or night until they are virtually exhausted.

The Wire Fox Terrier is a medium-small sized breed of dog that is most noted for its wire haired coat and its unusually long head with its mustachioed snout. It is mostly white in color and will tend to have brown and black markings on its side back and head. Its tail that stands erect at all times will be cropped to one-quarter its original size and its ears will stand erect but flop down half way up their length.

It is an active fun loving breed that is usually on the move, so you will very rarely see one standing still. An adult male should stand 15-16 inches tall at the withers and weigh in at 18 pounds with the females standing approximately one inch shorter and weighing 3 pounds less. This puts them in the medium small category of size for dogs in general, but large for a Terrier.

Its dark deep set dark eyes reflect intelligence and the enthusiasm that this breed of dog is all too well known for and are perfectly circular in shape. Its a sturdy well balanced dog that is slightly taller in the front than it is in the back that gives it a slightly sloped overall appearance.

This is due to the fact that like most all Terriers it was bred to have strong hind quarters for pushing its way through thick brush in the pursuit of game in the field. This is a dog that was built for action and quite active it is.

They are stubborn, clever and master escape artists, so a sturdy fenced in yard is a must for this dog. They are however persistent watch dogs and and highly affectionate with their family and also are very playful with children although they can be provoked to bite if agitated.

As far as this breed of dog goes, they require very little maintenance other then as it pertains to their active mischievous disposition. This means that they require a higher level of attention then most other breeds require with regards to obedience training.

Even after years of work even the best trained Wire Fox Terrier will occasionaly fail to come when its name is called due to their independent nature need to test their master. Their thick wiry coat however will require some tending to from time to time. Also, they require a measurable degree of stimulus and activity including outings to parks or brushy areas where they can do some exploring as their natural bred in instincts require it.

The Wire Terrier is believed to have descended from a now extinct breed of Terrier called the Black and Tan Working Terrier in England and the exact date that it was developed is still unknown. However, it is felt by most researchers that it took place sometime in the mid to late 1700s.

It was bred as a working hunting dog for small as well as larger game such as foxes and badgers and that accounts for its aggressive fearless nature. It is said that they were so aggressive in their pursuit of its quarry that hunters would often have to pull them out of animals burrows by their tails after they had pursued them so far in that they became stuck.

The first actual depictions of the Wire Fox Terrier were painted in 1790 commissioned by a man named Colonel Thornton who had his dog by the name of pitch immortalized on canvas. It is unclear when the first Wire Fox Terriers were brought to the United States, but they were given two separate classifications for over a century by the American Kennel Club, those being the Smooth Fox Terrier and the Wire Fox Terrier varieties.

This all ended in 1985 when the Wire Fox Terrier was recognized as a separate breed entirely by the same organization. It was in the 1930s that their popularity soared after they were depicted in a popular series of films called The Thin Man, however, they have never took hold as a common household breed due to their aggressive nature that can make them a difficult dog to own.

Another reason for their gradual decline in popularity is the changing demographics of dog owners that now tend to live in towns and cities as the Wire Fox Terrier is definitely a dog that functions best in a rural environment. Also, changing modern hunting laws and practices have brought about changes in the way that animals can be used while hunting in the U.S.

This has led to other hunting breeds such as retrievers and pointers being the dogs of choice for sportsmen that take dogs into the field when they are hunting birds and small game. However, the fact that this bred of Terrier has received more best of show awards than any other breed of dog in major conformation shows only stands to confirm that it has a constant and durable popularity with a measurable number of dog enthusiasts across Europe and the north American Continental that remains constant to this day.