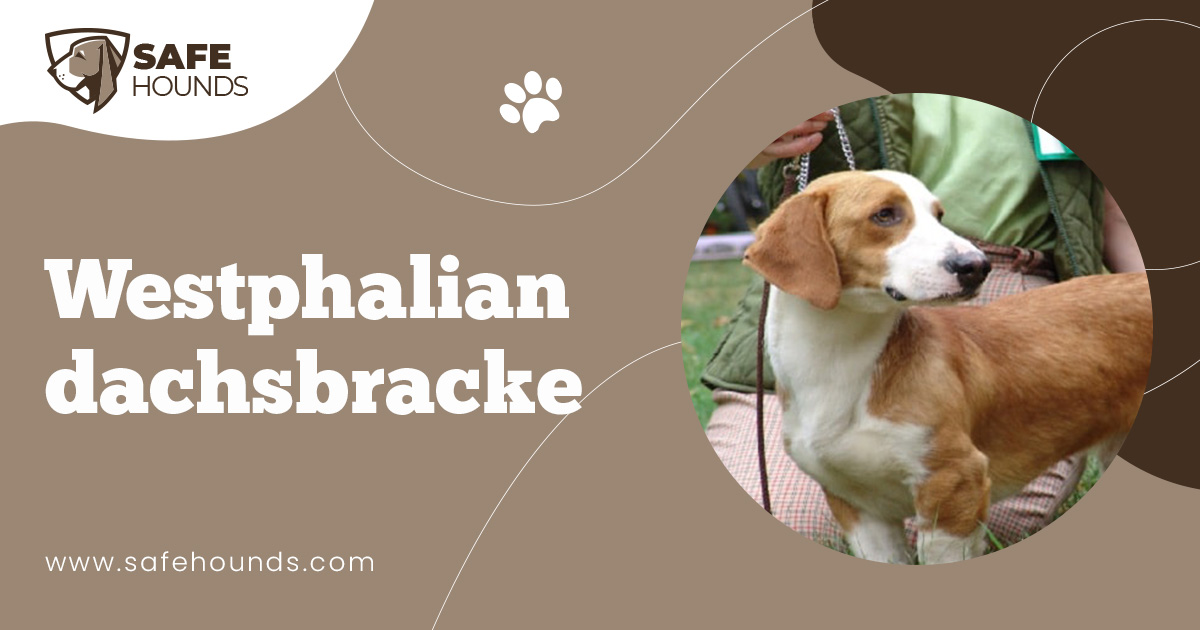 The Westphalian Dachsbracke is a short legged medium sized breed of German origin. This breed that was developed in Germanys Westphalia region is actually the downsized version of the German Hound. It is believed that the German Hound was crossed with the dachshund and produced this breed. This breed has retained most of the physical features of the German Hound but it has taken the compact and powerful build of the Dachshund. The drop ears, the red, black and white color of the short coat as well as the body built is very similar to the appearance of a Beagle. This breed prominently featured in the development of Swedens scent hound, the Drever. The relationship is very evident. In fact to an uninitiated, the dogs can be mistaken to belong to the same breed.

The Westphalian Dachsbracke was primarily developed to respond to the need for a low on the leg breed of hunting dog. The short size allows the dog to penetrate burrows, dens and caves. This is an obstinate and tenacious hunter, one that will not allow a prey to escape even if it means trailing the rabbit, hare or fox for hours. For its small size the dog is noted to be an excellent hunter of wild boar. Because of an excellent scenting ability, the breed is used to blood trail. This dog is highly valued by German hunters for its expertise in circle chasing. The dog consistently gives tongue while chasing the prey around in circles and driving the quarry to the waiting hunter. The Westfalisched Daschsbrake will not be intimidated by game much bigger that its size but due to the shortness of the legs, the dogs hunting prowess is hampered by deep snow.

This short legged hunting dog has a more compact body that gives a more powerful impression than what its ancestor, the German Hound has. Compared to other short breeds, the Westphalian Dachsbracke has straighter and more strongly developed forelegs and hind legs. The thighs are strong and well muscled. This breed has a moderately strong neck that is rather thick but gets finer towards the head. Similar to a German Hound, a Westphalian Dachsbracke has a narrow and elongated head. The skull is a bit broader than the cheeks. This breed has a rather unique nose. The nose has a light colored strip on the center while the nose wings are darkly pigmented. Dark clear eyes have a friendly though melancholy expression. Broad medium length drop ears have bluntly rounded tips. Strong and even dentition meet in a level bite.

A Westphalian Dachsbrackes trunk has a medium length slightly arched back, a broad and strongly developed loin. This breeds chest is narrower than that of a Dachshund but it is well supported by the strong forelegs. The belly is slightly tucked up. Tail that is set rather high is very thick at the root. Hair on the upper side of the tail is smooth, bristly on the underside. The dog has a very dense coarse hair. Short hair covers the head, the ears and the lower part of the legs. Hair is longer on the neck, over the back and on the underside of the tail. This breed has an impressive tricolored coat – a red to yellow hair, well defined black saddle and the white Bracken markings. The dog has white markings on the collar, chest, legs and tip of the tail. The dog also has a white blaze.

This breed is a serious and a tenacious hunter but it makes a suitable home companion as well because it has a loyal, alert and friendly personality. Because of the friendly nature, this breed gets along well with children. The friendly nature extends to other dogs as well. However, the dog is quite obstinate and would need to be trained by a firm owner who would make the dog understand that its rank is at the bottom of all the family members. A well trained Westphalian Dachsbrake makes a superb hunting companion and a home companion with a well balanced temperament.

Being a hunting dog this breed would need regular exercise. The dog can live in a city as long as there is a well fenced yard where the dog can run without being restricted by a leash. These are very energetic dogs. They need to burn up their energies otherwise they will turn into destructive dogs.

The Westphalian Dachsbracke is an easy breed to groom not only because of the size but also because of the short hair. Maintaining the good condition of the coat would be as easy as running a brush once or twice a week to remove dead hair. Frequent bathing is not recommended for this breed.

Bassets are for the French while dachshunds and dachsbracke are for the Germans. The Germans have created dachshunds and dachsbrackes for slower hound work. One of these low on the leg breeds is the Westphalian Dachsbracke . This breed of scent hound originated in the Westphalia region of Germany that is between the Rhine and Weser rivers. This short legged bracke has existed in the western areas of Germany particularly in Westphalia and in Sauerland for a very long time.

The origin of this breed that was formerly called Sauerlander Bracke is not certain. It was believed that the Westphalian Dachsbracke resulted from the natural mutation of the larger German Brackes. Some dog experts speculated that this breed resulted from crossing German Hound with Dachshunds. Dachshunds roots goes back to ancient Egypt. The breed was created by European breeders using German, French and English breeds of hounds and terriers. This breed is considered as a symbol of Germany. The German Hound on the other hand is a tan, black and white coated hot tracing breed that originated from Celtic hounds. This breed has a clear bell-like voice and utilized to hunt fox, hare, rabbit and wild boar in Germanys hills and low mountains. Mountains in Germany teem with small and large game. As the German hunters say, Hunting in these woods is impossible without dogs. The Westphalian Dachsbracke was primarily developed to do what the large brackes find hard to do. These low on the leg hunters have excellent scenting ability. These are passionate hunters have superb hunting instincts but what is more important is that because of the short size, the dog is capable of following the prey even in low lying bushes a feat that proves to be daunting for bigger brackes.

This breed is noted to have existed since the 17th century. Similar looking dogs were depicted in European paintings during the Middle Ages. However, first breed description were made by cynologists Ludwig Beckmann and Otto Grashley only in 1886. The final standard though was set in 1910. These dog enthusiasts were the ones who named the breed Westphalian Dachsbracke . In 1935, this breed was recognized by the German Kennel Club. In 1987, the Westphalian Dachsbracke became internationally known when it was officially recognized by FCI. This ancient breed was highly valued by German royalty not only as a hunting dog but also as a companion. In spite of the attractive and elegant appearance, the breed is very rarely seen in dog shows. The Westphalian Dachsbracke is now considered a very rare breed.