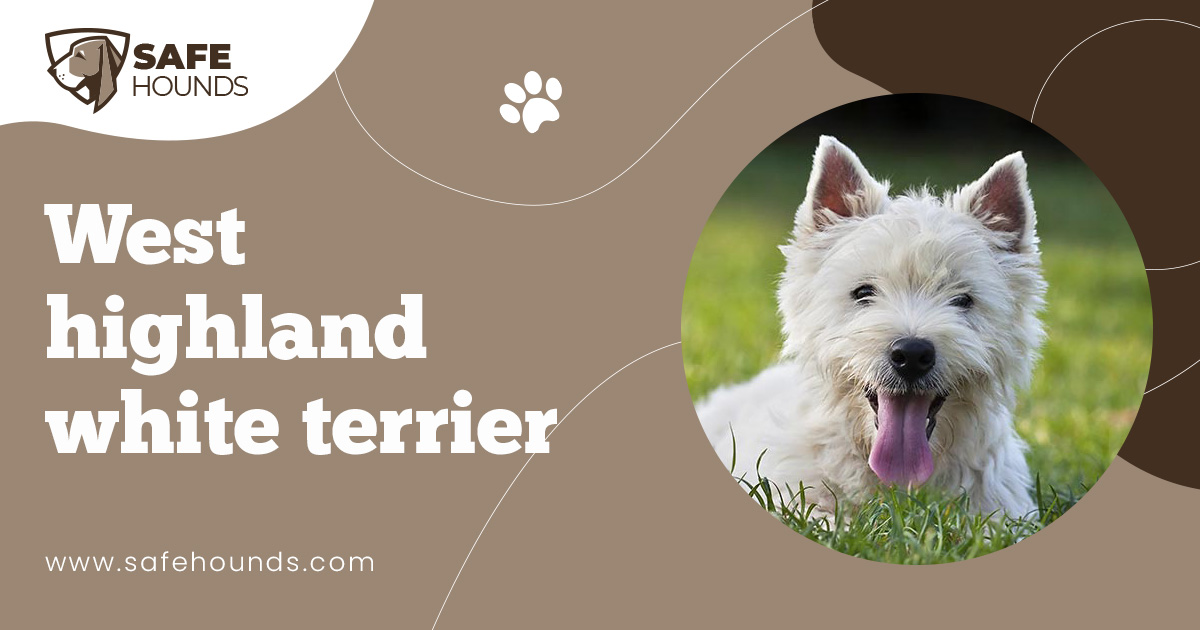 If you are interested in seeing a nice picture of a West Highland White Terrier, all that you have to do is go look at the label on a bottle of Black and White brand of scotch, because it is their official mascot. This breed of terrier is one of the smaller terriers weighing approximately 15-20 pounds.

It typically has a smallish tail that stands erect, so it is never docked. With their erect pointed ears and shaggy white coat, they have the uncanny appearance of a small lion and also the courage to match one. Its face is covered completely with shaggy hair in almost, but not completely the same way that a sheep dogs face is covered, because with this breed of dog its piercing black eyes are plainly visible.

The West Highland White Terrier is in deed a terrier and hence, possesses many of the personality traits that are known to terriers. This means that it can be aggressive and stubborn with a deeply ingrained instinct to hunt and pursue other small animals including cats.

This is not always the case however, and some in fact are known for being extremely timid and withdrawn in unfamiliar surroundings. Because of their size and intelligence they do make a good house pet but it does require a yard to play in and exercise. As they age the Westie can become irritable and may become prone to snap if they are irritated.

In spite of their size they do make excellent watch dogs and it is for this reason that they are so often the choice of people that live in apartments in the city. They are very affectionate with their owners and their families and are quite generous with dog kisses when their master or a family member returns home after being away for any amount of time.

The West Highland White Terrier is a small, compact, thick boned dog whose fluffy poodle like appearance belies its tenaciousness, because after all it is a terrier. It has a constant alert look, with its short usually erect tail and its piercing black eyes that look out form its lion like face.

It has a beautiful coat of silky straight to semi wavy hair that responds well to brushing. Its head is semi-round slightly convexed and its chest is deep, so with its defined musculature it has a very sturdy overall appearance. The hair on its face can also lend it a mustachioed appearance that is common to many breeds of terriers as well.

The males will stand at approximately 10-12 inches in height and weigh in at 15-20 pounds, while the females will be approximately one inch shorter and a few pounds lighter in general. Because the hair on the lower extremities of their body will hang down slightly longer, they can have the appearance of being closer to the ground than they actually are.

They are a lively dogs, so they will usually be seen on their feet answering the door or playing with a favorite chew toy. As puppies they are completely irresistable and it is for this reason that so many people are taken with the breed and end up with one or two in their homes as adopted family members.

In spite of its too-cute poodle like appearance, the West Highland White Terrier is none the less still a terrier, so it does have many of the common personality traits that all terriers possess. However, as terriers go, this breed is far more mild mannered and domestic than others, so it does make a nice house pet.

They in fact make great indoor watch dogs and have a sharp piercing bark as well as the courage of a dog many times their size. While some are prone to mildly aggressive behavior others can be far more docile, so care should be taken when selecting a puppy to bring home as a family pet.

Aside for obviously having a shaggy silky coat that needs attending to, the West Highland White Terrier does have other mild conditions that it is more prone to than other breeds. They are known for having overly dry skin that can cause problems if care isnt taken.

This means that it should not be washed more than once a month and even then, a mild shampoo for dogs should be used. Its ears need to be cleaned on a frequent basis to prevent wax build up and the ensuing ear infections that it can cause. Also, if it is spending an inordinate amount of time indoors its toe nails should be kept trimmed.

The actual specifics of the origins of the West Highland White Terrier are somewhat vague, but what is known is that they first originated sometime in the early 1800s in Scotland. They went through a few name changes in their earlier years in Scotland and were first known as Poltalloc Terrier and then as the Roseneath Terrier before their present commonly accepted name was given to them.

As to who exactly deserves the credit for creating the breed is unclear, but it has been narrowed down to two men. One is Edward Donald Malcolm while other sources lend credit to the 8th Duke of Argyle. While some speculate that these two men may have been working alone and simultaneously developed the breed, others speculate that they they may have been working cooperatively with one another.

The West Highland White Terrier were in fact bred as hunting dogs that were valued for their bright white hair allowing hunters to easily distinguish them from their quarry. This may not seem, on the surface, to be important to someone that hasnt hunted fox, but the truth is that small brown hunting dogs were often accidentally shot by mistake during hunts.

In spite of their size, they are well recognized as a tenacious hunter and are still used for that purpose today by many sportsmen who desire a dog that functions as both a great domestic pet as well as a qualified partner in the field.

It is unclear when they were first brought to the North American Continent and by who, but it is commonly felt they arrived sometime in the late 1800s. Because of their size, elegant appearance and finely tuned work ethic as well as their playful disposition, they have remained popular throughout the time that they have been in the U.S.