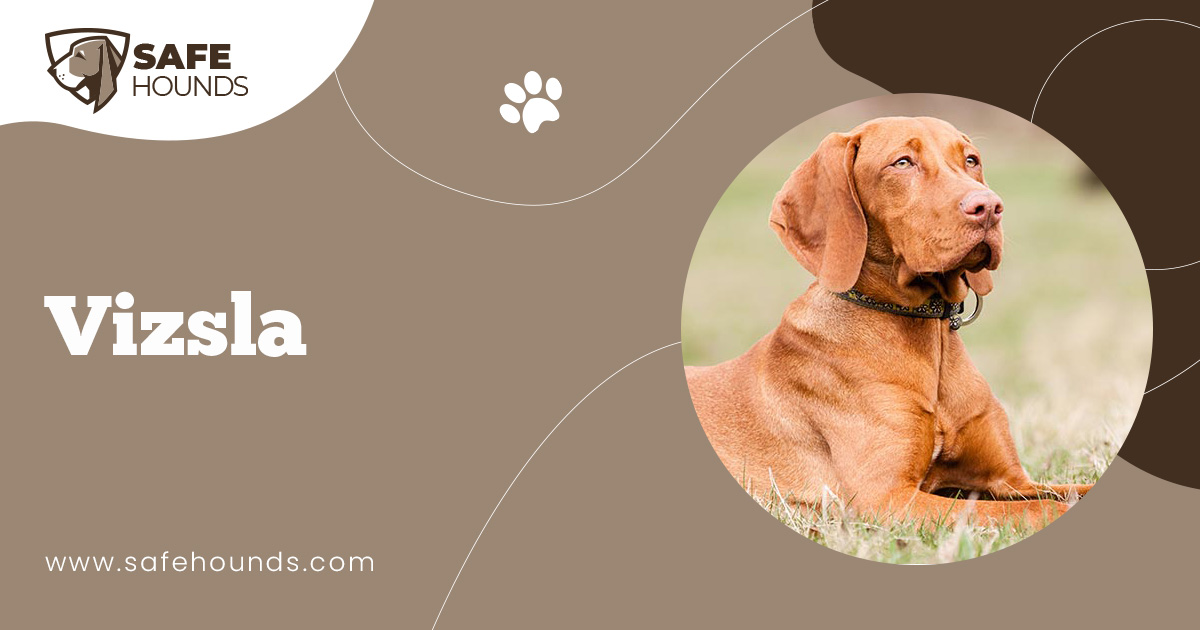 The fact that the Vizsla or what is often also referred to as the Hungarian Pointer is with us today is a matter of luck, because by the end of World War II the breed was all but extinct. This is due to the fact that at the beginning of that war the breed was for the most part confined exclusivly to Hungary which was heavily effected by the war, as was the rest of Europe.

However, the breed did recover and as of 1960 is fully recognized by the American kennel Club. At first glance the Vizsla is easily recognized to have the characteristics of a pointer and is in fact an excellent hunting dog that excels in retrieving small game such as rabbits and waterfowl. The Vizsla is a high energy breed that is most content when it has large open spaces to hunt and play in.

Its a medium sized, slightly lean yet muscular dog that ideally should have a short coat of hair that is golden rust in color although the Hungarian Wire Haired Vizsla will have a wire haired coat that it inherited from the German Wire Haired Pointer which the Hungarian Vizsla was bred with to create this second breed of Vizsla.

The Vizsla is also possessed of a noble temperament and keen protective instincts that also make it a good watch dog. Due to its even temperament, playfulness and willingness to accept instruction and training, this breed of dog does make for a good family pet as long as it has enough space outdoors for it unwind in. Also, the Vizsla is well known for its affinity for water and because of this trait, loves to retrieve sticks and toys that have been thrown into a lake or river.

The Vizsla is similar in appearance to a Weimaraner, but is slightly smaller in stature with the ideal height being 22-25 inches for a male and 21-24 inches for a female. Also, its weight for a male should range between 45-65 lb and 40-55 lb for a female. It is lean yet muscular and ideally will have a well toned torso. The Vizsla is a short haired breed with a color that has been described as being sandy-gold or copper-brown and it can often have patches of white on its chest and toes but ideally it should be solid in color with no white on its body anywhere.

It comes in two distinct varieties, one being the wire haired and the other being smooth, also the tail should be docked in both varieties of Vizsla but the two varieties each have different lengths that their tails should be docked to. The Vizslas head is wide between the ears with a moderate stop between the skull and forface with a determined serious expression on its face and a light brown nose.

Its ears are medium length and will hang loose and cover the side of its head. Its eyes can vary in color, but ideally the color of the Vizslas eyes should match the color of its coat. Overall the Vizsla is a robust dog that is well balanced in its general overall appearance and because of its high strung temperament will tend to be active when not at rest.

Vizlas bond very quickly and closely with their owners and are a very affectionate playful breed of dog. While they are known for their protective nature they are not prone to barking unless they are provoked or seriously concerned about something. The Vizsla is instinctively a prolific hunter and because of this they are quite playful, excelling at games of fetch and they also have a particular affinity for water and swimming. Due to its sensitive personality and its tendencies to bond quickly and closely with its owner the Vizsla must be trained gently without the loud harsh reprimands that other breeds can respond positively to.

The fact is that the Vizsla is unique from most other breeds of dogs in that they dont have an undercoat. This means two things for the owners of this breed of dog. First it means that the Vizsla has far less hair to shed, so if it is brushed periodically its a great dog for the home. Also, because it is devoid of an undercoat it is far more susceptible to cold weather, so it must never be kept in an unheated outside kennel. The fact is that the Vizslas favorite place to sleep on cold nights is with its master, buried under covers at the foot of the bed.

The history of the Vizsla can be traced back one-thousand years to a tribal people known as the Magyar who occupied Central Europe. This is due to the fact that depictions of the breed can be found in artwork and etchings dated to that era. In fact, the actual first written mention of the breed was in 1357 in the Illustrated Vienna Chronicle which was a manuscript that was written on the order of King Louis the Great by the Carmalite Friars.

It is speculated that the breed of Vizsla that we know today was actually bred from smaller breeds of dogs that those earlier people used for eradicating rats. In those early times, select breeding of dogs was done by the aristocracy and the Vizsla is no different in that respect and it is felt that it was warlords and barons that were responsible for maintaining the purity of the breed in the area that is now known as Hungary.

It is the terrain of Central Europe in that early era that was crucial in fostering the Vizlas keen hunting instincts, as it was primarily pastoral agricultural land sparsely dotted with light forests and marshes. A breed such as the Vizsla that had the ability to point and retrieve as well as an affinity for water was truly an asset in those early times when people, who rarely knew how to swim, hunted primarily for sustenance rather then sport.

The Vizsla remained a fairly popular breed of dog that was primarily confined to Hungary up until the second world war which dealt the breed a devastating blow. This is because as a result of the devastation of World War II the breeding of the Vizsla was so interrupted that it came very close to becoming extinct.

However, due to the efforts of Hungarian breeders who were determined to see it survive in its pure form, it did survive but only in very small numbers. During the course of the history of the Vizsla it was used to develop other breeds of hunting dogs such as the Weimaraner and it is speculated that some of the breeds that were developed by the Vizsla were in turn used to redevelop the breed after its decline to near extinction.

However, it was not until 2007 that the Wire Haired Vizsla was recognized by the Australian National Kennel Counsel. As it stands today, it is roughly estimated that there are only 300-400 Wire haired Vizslas living in the entire North American Continent including Canada, so it is in deed a very rare breed of dog.