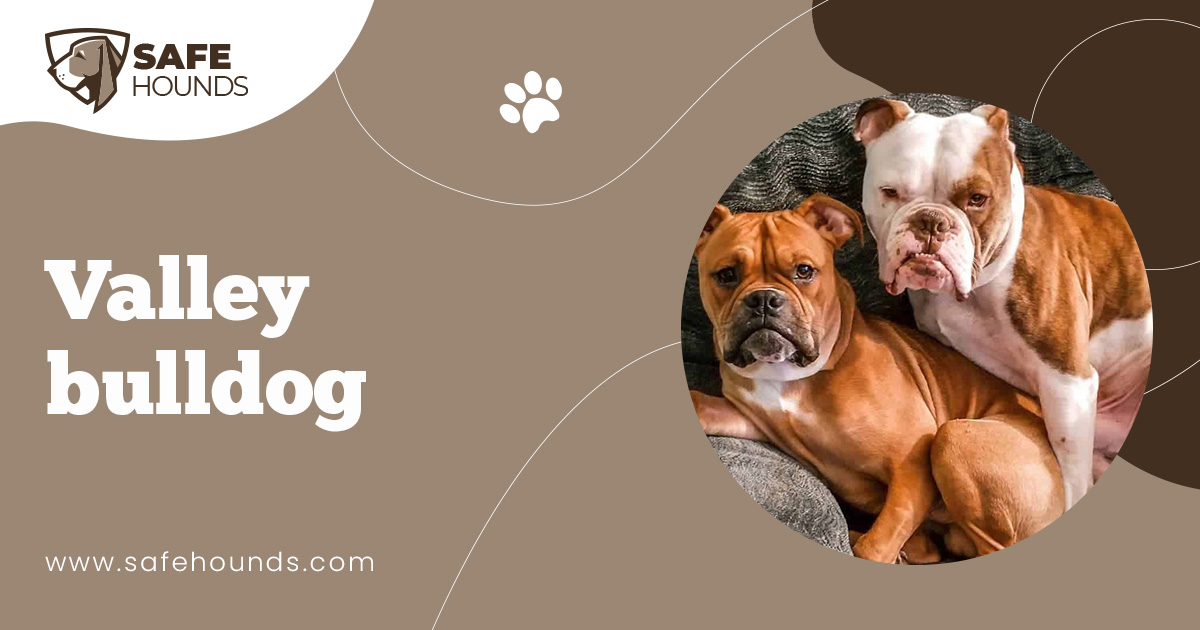 Bulldogs have a not so usual appearance. A massive short faced head, thick folds of facial skin, thick pendant flews and the very noticeable sourmug expression are the signature characteristics of bulldog breeds. The Alapaha Bulldog, American Bulldog, Catahoula Bulldog, Old English Bulldog are only some of the breeds of bulldogs that may have different personalities but would generally have the same appearance. The Valley Bulldog is one of the bulldog breeds noted to have the typical bulldog sourmug expression.

The Valley Bulldog is an extremely rare breed. The dog has existed in Nova Scotia, Canada since the 1900s but the breed was speculated to have developed in the Annapolis Valley in the 1950s. The English Bulldog and the Boxer are the progenitors of this breed. A Valley Bulldog was specifically developed to be an athletic and sturdy ranch working dog. The dog was originally utilized to herd cattle and to guard the animals from predators. This dog is naturally wary of strangers thus it was used as watchdog as well.

A Valley Bulldog has a very stern expression but did you know that bulldogs are one of the most popular breeds of dogs in the world? The Valley Bulldog is a very sweet, adorable and kindhearted breed thus in spite of the rather odd appearance, very few can resist this lovable breed. Bulldogs are noted for their intelligence. A Valley Bulldog has a high level of intelligence that makes training really easy. The dog has an innate eagerness to please thus it can be easily trained to do just about anything. However, the dog would need a firm and dominant owner as it is not unusual for the dog to manifest a stubborn temperament especially if it is aware that it can get away with battling wits with the master. Bulldogs suffer from a number of health concerns. Puppies are commonly delivered through caesarean section because of the massive heads. With the incorporation of the Boxer genes, this concern was corrected. A Valley Bulldog can whelp without human intervention.

A Valley Bulldog has the typical massive short faced head of bulldog breeds. This breeds wide shoulders, stocky body and muscular limbs exhibit immense strength, stability and vigor. Valley Bulldog females stand from 14 to 18 inches and males measure from 15 to 18 inches at the withers. This breed weighs from 50 to 85 pounds. The breed has a large broad head, the circumference of which is equal or greater than the height of the dog measured at the shoulders. This breed has the signature undershot bite of bulldogs. A Valley Bulldog does not have an exact standard thus specimens can have slightly different features. For instance the moderate sized eyes can be round or oval shaped. Set wide apart, the eyes can come in any color. The muzzle can be pressed in similar to that of the English Bulldogs or a bit longer similar to the snout of a Boxer. The dog can have button ears that fall forward or rose ears that fold back. Ears can also hang down on the sides of the head. The dog has strong jaws and sharp pointed teeth. This breed has loose skin that forms prominent skin folds. The forehead and the nose have obvious wrinkles. Loose skin is found under the chin as well. These wrinkles remain through adulthood. Wrinkles on the body of puppies tighten when the dog matures. The short to medium length neck is thick and muscular. A Valley Bulldog like any other breeds of bulldogs has an athletic body. The well boned body has good muscle tone. The medium length back has a slight rise from the withers to the rump and displays strongly defined muscles. The wide and deep chest has well sprung ribs. Docking will never be necessary for this breed as a Valley Bulldog has a very short and almost non-existent tail. The tail is either a very short screw tail or a small stump. Short and wide apart legs should be firm and not bowed to give the dog a proud stance. The dog has strong pasterns and round feet. A Valley Bulldog has the Boxers flat, short and sleek coat. Coat colors vary from black, fawn, white, red and brindle combinations.

A Valley Bulldog is an outstanding working breed but this breed also makes a loyal companion. The dog forms a strong attachment with its family. This is a very playful breed. The dog can be a clown at times. Although the dog makes a great companion of the entire family, its rather silly and playful antics makes the dog a favorite of the children. A Valley Bulldog is also happiest when in the company of the young ones. Some specimens though would exhibit the Boxers penchant for jumping and for being rough at play. Small children must not be left unsupervised with the dog. The dog is very protective of its family. The dog will bark a warning at the slightest odd noise and would manifest an aggressive temperament to prevent intruders from entering the home. A well socialized Valley Bulldog however, would be a good companion of other dogs in the family. This breed tolerates other dogs and gets along well with smaller pets.

The short sleek coat of a Valley Bulldog would need very little grooming. This naturally clean breed has a wash and wear coat. The dog is an average shedder. Brushing and wiping the coat with a damp cloth would be enough to maintain the good condition of the coat. This breed loves the water but frequent bathing would not be necessary. This breed has skin folds that would need to be regularly cleaned and completely dried to prevent infections and skin irritations. A Valley Bulldog is an adaptable breed. The dog would do well in any type of environment. In an apartment, the dog would be an undemanding couch potato as long as the dog receives attention from the family. The owner though has to make sure that the exercise requirement of the dog is provided. The short snout can cause breathing problems. The dog must be monitored when exercised in hot weather. A home with a yard would save the owner from the need to take the dog on daily walks as the space would allow the dog to take care of its own exercise requirements.

Bulldogs were originally developed in the British Isles. The bull in the name was given to the breed because of its association with bull baiting. Bulldogs are courageous and very aggressive dogs that are practically oblivious to pain. These dogs were specifically developed for the blood sport of dog fighting. After dog fighting was banned, breeders were faced with the task of eliminating the aggressive temperament just so to preserve the breed. Development of the breed was continued over the years until the unwanted traits were bred out. A new breed noted for a gentle and lovable disposition was born the new Bulldog. The breed was also acclaimed for its resolute and dignified demeanor. This history was shared with many other bulldog breeds. In later years, a new breed resulted from this breeding program. This breed is the Valley Bulldog.

The Valley Bulldog was developed when unnamed breeders crossed the Boxer with a Bulldog. The Bulldog is otherwise known as English Bulldog. This breed is famous for its sourmug expression but owners of this breed attest to the dogs good temperament. The Boxer, a breed that was developed in Germany is a stocky dog. This medium sized dog is very athletic. The Valley Bulldog has the athletic build of the Boxer and the exceptional temperament and the unyielding spirit of the English Bulldog. These traits have made the Valley Bulldog a remarkable all around farm worker. This breed was originally utilized to drive cattle and to protect the livestock from wolves, foxes and from other predators and to protect human farm occupants.