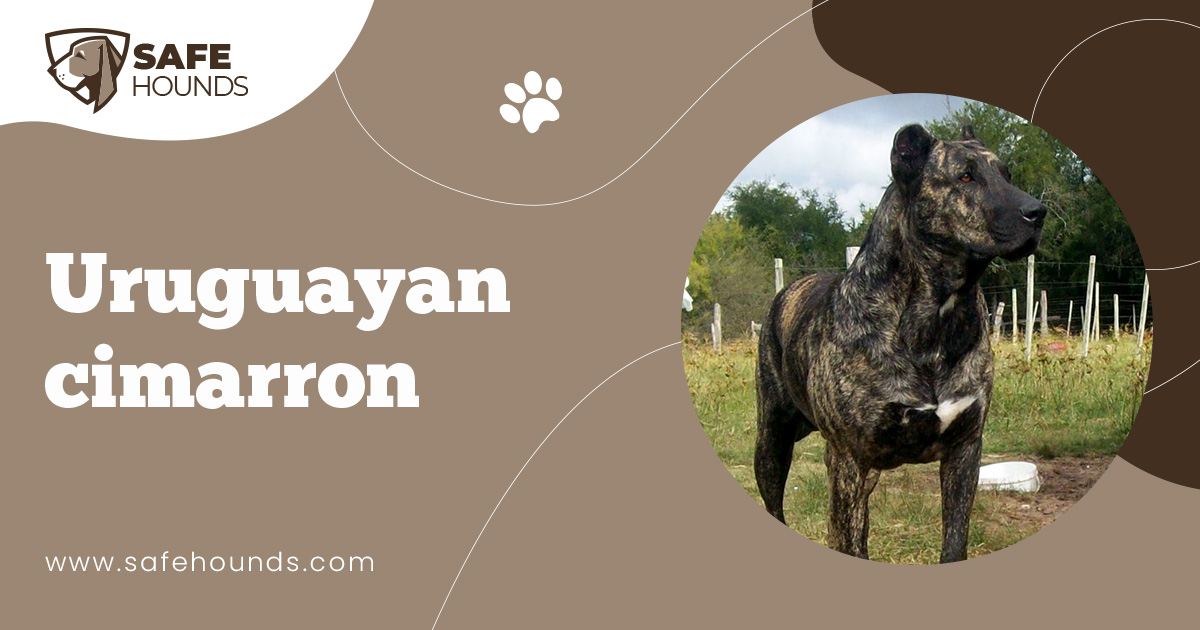 The Perro Cimarron, a large sized molossian type of dog that has a strong compact well boned and well muscled body. This dog was given the honor of being the National Dog of Uruguay. Due to the survival story of this breed as well as the inherent courage and the ferociousness it was deemed fit to make this dog the mascot of the National Army of Uruguay. This breed is so popular even the current president of Uruguay – Tabare Vasquez owns a Perro Cimarron. FCI has recognized this breed in 2006 and was given the official name Cimarron Uruguayo. This breed is also known as Cimarron Creole in its native land. The word Cimarron literally means wild or untamed. Cimarron may also refer to the Rocky Mountain sheep. Criollo means a native of the locality.

Uruguayan Cimarron is the only native dog of Uruguay. This is a versatile breed, a clever and agile one that excels in the performance of its herding duties, ferocious and courageous to be able to hunt game several times bigger than its size. A Perro Cimarron is extensively used in wild boar hunting. In Uruguay, wild boars are considered plagues. Wild boars were introduced in the country during the early 1900s. Because wild boars do not have natural enemies their numbers grew extensively until they have started destroying crops and flocks of sheep. Packs of Uruguayan Cimmaron together with other breeds of hunting dogs were used to control this plague. Because of the dogs heightened senses it is noted for its tracking prowess. A Perro Cimarron also excels in agility trials. And most of all, this dog will defend the human family and the territory even if it means losing its life. The dogs muscular frame and the ferocious appearance would be enough to deter anybody from harming the dogs human family.

The dog may appear feral but it is actually docile and gentle to its human family. This dog is an affectionate household pet that is always ready to do the masters bidding in order to please.

The Uruguayan Cimarron is a medium sized breed of dog with well boned and well muscled body. This is the only native dog of Uruguay and most valued for its outstanding herding, guarding and hunting abilities. The dogs skull is wide, the muzzle is of medium width and appears to be shorter than the skull. A Uruguayan Cimarrons jaws as well as the teeth are strong and powerful. It has to be as these dogs used to be a plague when they killed cattle. The dog has a broad black nose and an upper lip that covers the lower lip. The eyes are almond shaped, medium sized, usually brown in color but may also take after the color of the coat. Well pigmented and tight fitting eyelids give the dog an inquisitive expression. Triangular and medium sized ears droop but not close to the cheeks. In some countries, the ears are cropped creating a rounded tip that is similar to the ears of a Puma.

The breed has a rather short but well muscled and very strong neck. The dog may either have a saddle backed or a level topline, well defined withers and a slightly arching loin. The chest is broad, well developed and reach the level of the elbows. The dog has well spring ribs. Forelegs are straight with well boned forearms. The hind legs are parallel and straight with well developed muscled upper thighs. This gives the dog immense power.

The thick and supple skin is covered with short smooth hair that lies close to the body. Coat color can be brindle or any shades of fawn. Specimens of this breed may or may not have a mask. Others may have black shadings, white marks on the under jaw, on the lower part of the neck. Some would have white markings on the forechest and on the legs.

The Uruguayan Cimarron is an intelligent dog but this breed is more noted for its courage. Utilized in its country of origin to hunt wild boar and to herd cattle this dog also makes an excellent guard dog. This dog is very protective of its human family. A Uruguayan Cimarron that is made a part of the family will make sure the family and its properties are safeguarded against any kind of intrusion. This dog is basically friendly with the family, known to be very gentle with the children especially if raised with them while still young. The dog though is wary with strangers. This is a dominant breed. The dog would not tolerate other dogs and pets. Socialization while still very young is imperative if the dog is intended to be kept as a pet. Socialization and obedience training can be a challenge and best done by an expert handler. Aside from being dominant the dog is extremely independent and may not take to training.

Apartment living is not for this breed. A Uruguayan Cimarron would fare well in the country or in a home with a large backyard. This is a working dog, one that would require plenty of exercise to maintain its fitness level. Being an intelligent breed the dog would also require mental stimulation. The breed would appreciate a chore but if this is not possible, including the dog in the activities of the family would provide for its mental exercise needs.

This is an easy breed to care for. Similar to any other short coated breeds, brushing the coat once or twice a week would be sufficient to maintain its tiptop condition. Nail trimming and ear cleaning should be included in the grooming routine of the dog.

The origin of the Uruguayan Cimarron just like any other ancient breed is uncertain. In America the domesticated breeds that were brought by the conquerors became wild when the dogs were abandoned and allowed to run freely. The same thing happened to the Uruguayan Cimarron. The breed was introduced by Spanish and Portuguese conquerors in the 17th century. These dogs were believed to be the progeny of the hunting dogs and the Molossers.

The Uruguayan Cimarron was also called the Creole Dog and the Gaucho Dog. This is a medium sized dog that has a compact well muscled body. These dogs are noted for their ferociousness and they would manifest extreme strength when they attack. These dogs were abandoned when the explorers left Uruguay. The dogs became wild and began breeding with each other. This natural selection strengthened the breed. These dogs have adapted well to the surroundings. With abundant food and no known predators, the population ballooned in no time.

Countless documents pertaining to the big number and the ferociousness of the breed existed. Father Gervasoni, a Jesuit priest on a mission to upper Uruguay mentioned in one of his letters written in 1730 the amazing large number of the dogs that literally littered the countryside. The dogs became a menace to crops and livestock when they have started killing sheep and cattle. These dogs became a danger even to the inhabitants. Thousands of these dogs roamed all over the country. In the later part of the 18th century and early part of 19th century the authorities ordered and encouraged the mass killing of these dogs. Tales abound about the tens of thousand dogs killed. However, the breed survived because bitches with their whelps found refuge in caves and in the woodlands near the Oliver River, in the Cerros Largos (Long Hills) and on the Otazo Hills. Because of these killing, only the fittest, strongest and wiliest of the breed survived.

Ranchers and farmers soon realized the possibility of raising these dogs and making use of them as working dogs. From then on the hunting and killing of the dogs stopped. Farmers captured and tried to domesticate the dogs. Their efforts were successful as they found out that the dogs have great potentials. The dogs became fantastic guard dogs, hunters and were depended upon to herd cattle. Selective breeding further improved the inherent qualities of the breed.