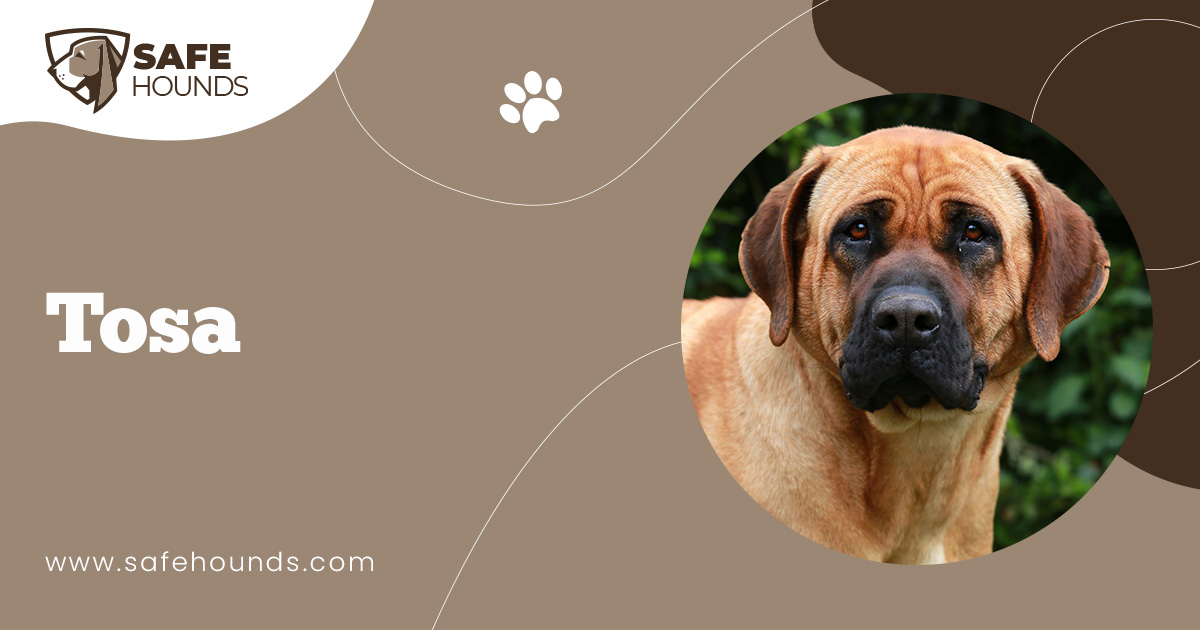 The Tosa is a breed that is native to Japan. It has gained fame as a fighting dog. This breed is a big and powerful dog. Throughout the years, the Tosa has actually been bred for traditional dog fighting. The Tosa is a Mastiff type dog and they are known for their fearlessness. In fact, even when fighting to the death, it is reported that they dont even whimper.

The Tosa is devoted to its family and is quiet and reserved. Even though they were bred as fighting dogs, they are kind and affectionate. They are not overly kind to strangers but they are friendly with people they know and like. The Tosa is aggressive towards other dogs so they should be kept at a distance from other pets. The exception to that is if they were raised around other pets. The Tosa is a devoted breed that is well behaved and definitely trainable. This breed has much in common with Mastiffs although they dont drool constantly. They have triangular ears that drop and strong forelimbs. The most desired color for this breed is red. The Tosa can also be dull black, tan, fawn, or brindle. Many times, they have white on the paws and chest and a black colored mask.

The Tosa is a powerful breed that makes an excellent watch dog and an excellent guard dog. The life expectancy of the Tosa is between 10 – 12 years. This breed is recognized by the NKC, ACR, CKC, APRI, and the FCI.

The Tosa is an athletic and massive dog. Despite its size, it is also quite agile. This breed has a large head with a broad skull and a fairly long muzzle that is squared off. The Tosa has very powerful jaws. This breed has fairly small ears that fall along the cheeks. The Tosa has small eyes that are almond shaped and dark. This breed has a long tail that is thick at the root and tapers to a point. The Tosa has a short haired coat that is dense and harsh. The preferred color for the Tosa is solid red. Other colors that are permissible include yellow, fawn, black, yellow, and multi-colored.

The average height of the Tosa is approximately 24 inches. The average weight of this breed is between 83 – 200 pounds. The reason there is such a wide range is because of their background in fighting. In these dog fights, there are three different weight divisions. These are lightweights, middleweights, and heavyweights.

The Tosa has a temperament that can be described as bold, brave, and fearless. They have a desire to please their owners and are sensitive to the tone of their owners and friends voices. The Tosa is loyal and protective. Despite its background as a fighting dog, it is a cal, quiet, and patient dog. The reason this breed is quiet is because the rules for Japanese dog fighting requires that the dogs are silent when fighting. This breed does better with a friendly approach to training. They are very intelligent and do not usually require a lot of repetitious training. They pick up on their training quite quickly if they are given the proper type of training.

The Tosa is reserved around strangers and affectionate toward its own family. This breed is mostly concerned with putting its own family first but if new people are introduced properly, they will get along with them also. The Tosa is excellent at protecting the home and family members. In most cases, simply the huge size and deep bark of the Tosa is enough of a deterrent for most situations. This breed is tolerant of children. However, because of their large size, they should not be left alone unsupervised with children.

The owner of a Tosa must learn to control them. This breed is too big and strong to be allowed to do exactly as they please. The Tosa can be okay with other dogs if they were raised with them as puppies. Otherwise, they are usually aggressive with other dogs. It is recommended that they are not allowed to live with other dogs that have the same temperament. The Tosa really needs an owner who has the capability to deal with powerful and large animals. A first time dog owner should not own a Tosa.

It is not difficult to groom a Tosa. All that is really required is to brush them on an occasional basis to remove dead hair. This will keep the coat in an acceptable situation. This breed does not shed excessively.

The Tosa should be given a walk on a daily basis. If they are given a large enough fenced in area, this breed can take care of large part of their exercise needs. However, it is still recommended that they be taken on a daily walk. Otherwise, they are more likely to have behavioral problems.

The Tosa is relatively inactive indoors. Some have suggested this breed will do okay in an apartment if they are given enough exercise. The Tosa will not do well in a kennel because they desire to be around their owners.

Compared to some other breeds, the Tosa has a relatively short history. This breed was developed sometime after the year 1854 when Japan was visited by Commodore Perry. This event opened up Japan to the Western World. At that point, other countries became aware of the Tosa. Many people believe the Tosa is a mix of Japanese breeds like the Shikoku and various foreign breeds. Some of these foreign breeds include the Bulldogs, Great Dane, Mastiffs, and the German Pointer. In the country of Japan, dog fighting was a part of acceptable culture. The Tosa was well suited for this activity and they are still used in dog fights today in secret pit fights.. As was the case with many breeds, the Tosa suffered after the first World War. The best dogs were moved to the northern part of Japan for breeding purposes. Over time, the Tosa was standardized as a breed and they began to be revived. Currently, the Tosa exists not only in Japan but in other countries such as Germany and the USA. In these other countries, the Tosa serve primarily as guard dogs.

The Tosa is considered to be a national treasure in Japan. Even so, they are a rare breed. In some countries, the Tosa has even been banned because they are considered a dangerous breed by those governments.