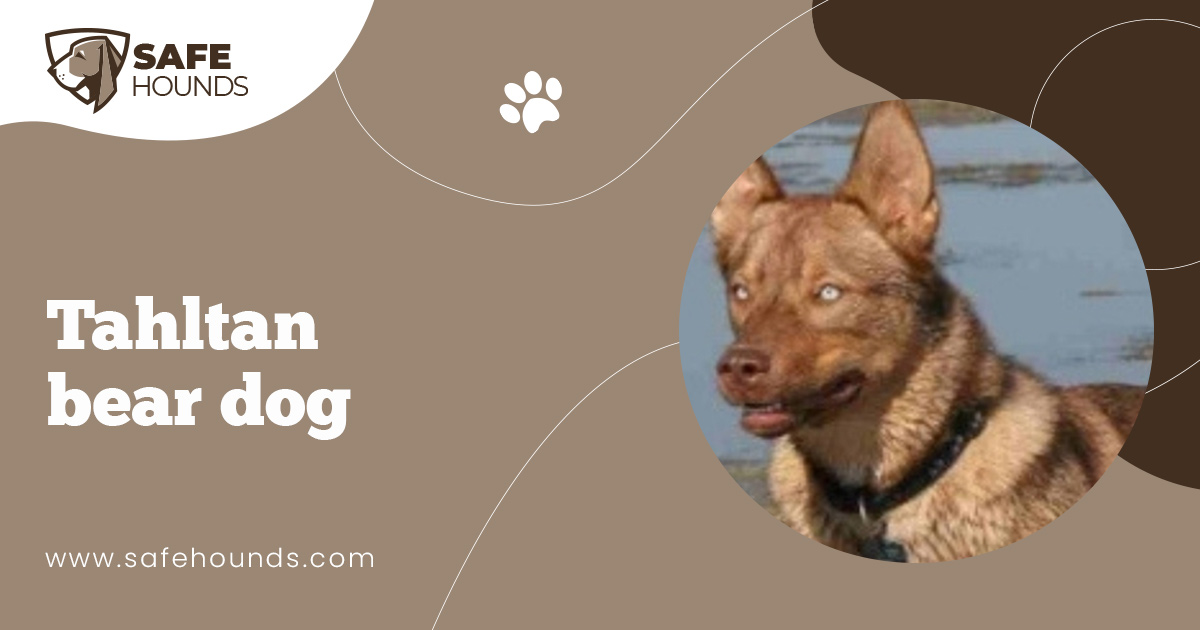 Tremendous power in a small package! This aptly describes the Tahltan Bear Dog, a small breed of hunting dog indigenous to Canada. This breed was named after the Tahltan Indian tribes. As expected, these Indian tribes of northwestern British Columbia value large husky breeds but these small fox-like hunting dogs are commonly seen around the camps as these dogs are very important to their existence as well. The Tahltan Bear Dog has a distinct yodel. The high pitched quick and clipped barking, the darting and nipping harasses the target animal until the hunters arrive with their bows and arrows to make the kill. These dogs assist the Tahltan tribesmen to hunt elk, ptarmigan, beaver, porcupine and a variety of other game. However, as the name suggest, this small fearless dog is a mean hunter of bears. The dog is light enough to be able to run easily on top of crusted snow. This feat would be hard for big and heavier dogs. Hunted in pairs, one dog will attack the bear from the front and the other will attack from behind. These very agile dogs would dart in and out, nipping the bear while dexterously avoiding the wild animals claws and teeth. On a hunt, these dogs will be carried by the hunters to conserve their energies and will only be released when the game is near. Before a bear hunt, the dog is bled by stabbing the hindquarters with a fox or a wolfs fibula bone. The claw of a dead lynx will be used to mark the face if the dog will be utilized to hunt big cats.

s de Tahltan is a primitive breed. Similar to wild canines, a Tahltan bitch will come to estrus only once a year. The Tahltan people were especially knowledgeable in breeding these dogs. With a diet that consists of fish, meat and small pieces of poultry, this small fox-like breed with a novel short and erect shaving brush-like tail can live for 10 to 12 years.

Measuring 12 to 15 inches at the shoulders and weighing between 15 to 20 pounds, the Tahltan Bear Dog is really a small dog. This dog though is highly valued by the Thaltan people in the mountainous region of the northwestern British Columbia and in Canadas Yukon Territory. This size makes it easy for the Tahltan Indians to carry the dog in their moose hide backpacks or chest packs. Carrying the dogs is commonly done to conserve its energies. The dog will be released when bears or grizzlies are sighted. A Tahltan Bear Dogs main distinction among other breeds is its peculiar yodel and its unique tail. The tail is not unlike a whisk broom or a shaving brush. The bushy tail is short, only about 6 to 7 inches in length and covered with stiff upstanding hair that fans out like a brush. Longer tails are commonly docked to achieve the desired length. The Thaltan has a short dense very glossy coat that is harsh to the touch. Average in length, the very thick topcoat completely covers the dense undercoat. A black coat with white markings is most common for this breed although steel grey coated dogs are also seen. White coats spotted with black or grey also occur but this coat type is less desirable.

This small hunting dog has a fox like appearance. The medium sized head has a domed skull. Average sized pointed muzzle is proportionate to the head and slightly tapers to a black nose. Eyes are dark and bat-like ears are very erect. Strong teeth meet in a scissors or level bite. A Tahltan has a medium length neck, deep oval shaped chest and well sprung ribs. The compact tight feet with hard pads and arched toes allow the dog to run easily on the thin crust of snow.

A Tahltan Bear Dog is a fearless breed. The dog would not be intimidated by a bear that is several sizes bigger than its small size. These dogs are highly valued by hunters not only because of their outstanding working abilities but also because of their affectionate nature. These dogs that live inside the tents of the Thaltan Indians are considered as family members. These dogs are great with the children. Hunted in packs, this breed tolerates other dogs as well. Socialization and obedience training is necessary for the dog to grow into a well mannered companion dog. This highly intelligent dog is very trainable. However, an owner must be consistent, gentle but firm in training the dog. This dog would thrive in an environment with a cold climate.

This hunting dog is an easy to maintain breed. An owner would not be saddled with the endless fight against tangles and the dogs dead hair. Brushing the dog once a week would be sufficient to maintain the prime condition of the coat. Frequent bathing will not be necessary. Being a working dog, the Tahltan Bear Dog would appreciate if given a task to do. A dog that is kept mainly as a home companion would need to be provided with opportunities to exercise. The dog must be taken for daily walks to satisfy its primal instinct to walk.

At the turn of the 20th century, the Tahltan Bear Dog is considered to be the worlds rarest breed of dog. The Guinness Book of Records has tracked the remaining Tahltan Bear Dogs for years. As no new registrations were made for 26 years, the Canadian Kennel Club (CKC) has finally retracted the recognition of the dog as a distinct breed in 1974. What is a Tahltan Bear Dog? Was the breed really lost to oblivion?

The Tahltan Bear Dog is a spitz and pariah type breed of hunting dog indigenous to Canada. These dogs were commonly seen around the campfire and sharing the tent with the with the Tahltan Indian families. This small dog has a peculiar yodel and a unique whisk broom of a tail. The dog is highly valued by the Tahltan Indians as apart from being a loyal and affectionate pet and a dependable guard of the family, the dog has proven its worth in providing its people with fresh meat for the dining table. As the name suggests, this breed is a bear specialist although it hunts other game as well.

This breed does not have a precise origin but oral history of the Tahltan Indians that was handed from generation to generation made mention of the pariah type dogs that were utilized to aid bow and arrow hunters to locate and hunt small and big game. The Tahltan Bear Dog is speculated to have descended from the dogs of the settlers during the prehistoric migrations. This dog has existed in the remote mountain areas of northwestern British Columbia and Northern Yukon for hundreds of years. However, the dog was recognized as a distinct breed only in 1915 during James Teits Telegraph Creek research. James Tiet though has the opinion that the breed is close to extinction as he only saw two or three specimens of the breed. Contrary to Tiets assumption, the breed flourished and by 1930s the Tahltan Bear Dogs have widely spread. In 1939, through the efforts of TWS Parson who was then the British Columbia Policed Commissioner and Constable J. B. Gray, the breed was recognized by the Canadian Kennel Club. The American Kennel Club followed suit by recognizing the breed a few years later. The breed gained not only regional popularity. The breed was presumably taken outside its homeland. A dog book entitled Stickeen written by John Muir, a California environmentalist described a dog that was included in his expedition to Alaska to be highly intelligent and cunning, swims like a seal and noted to have a strong constitution that endured hunger and cold like a bear. The dog is presumed to be a Tahltan Bear Dog. This breed was honored by the Canadian Post Office by being one of the four breeds featured in postage stamps in 1988.

The breed was presumed to be extinct. The Tahltan Bear Dog has adapted to its mountain environment subsisting on its usual diet of fish and meat that it has hunted. Extinction of the breed is attributed to the change of environment and change in diet when the dog was taken from its homeland. The Tahltan has succumbed to distemper as well. Moreover, low breed population was aggravated by breeding difficulties. Bitches whelp three to four puppies once a year. Very few puppies survive because the dam would kill the puppies once it is disturbed. The Thaltan Bear Dog has influenced the development of some breed. Unfortunately, this small hunting dog is now considered to be extinct.