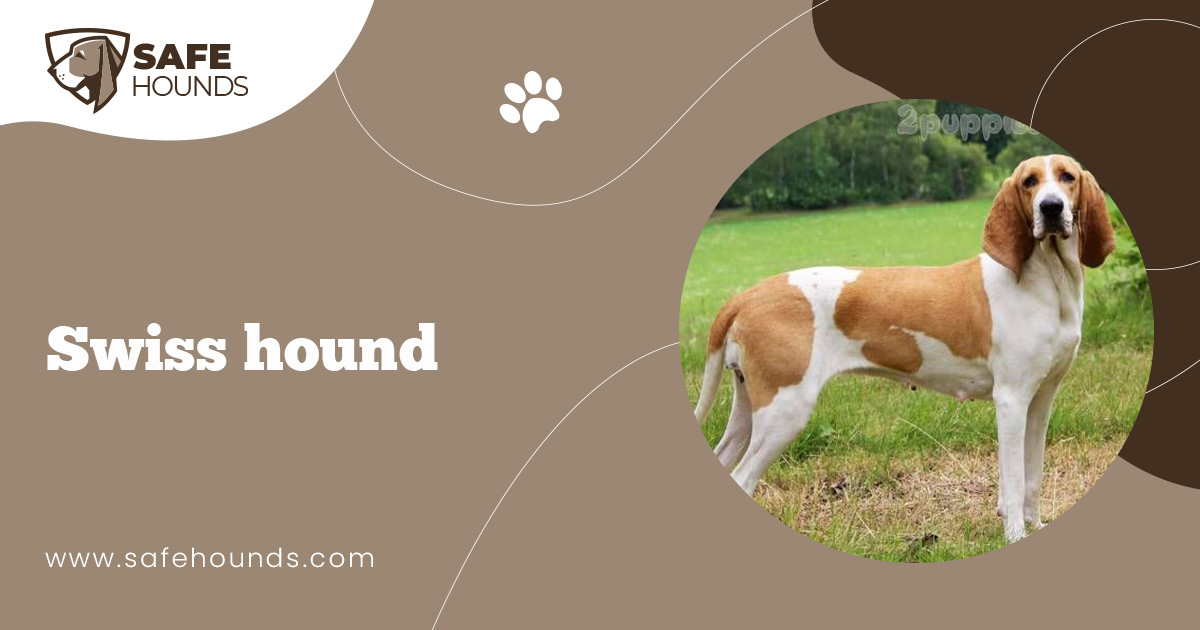 The Swiss Hound has been around since the Middle Ages in Switzerland. The development of this breed was borne out of a need for a sturdy dog that is suited to hunt in the high altitude of the Alps. Swiss breeders have attained their goal the Swiss Hounds lithe and lean body has the endurance to work effortlessly in high elevation. The dog does well in all types of weather though they are more suited for colder climates. These dogs are passionate and tireless hunters. There are four types of Swiss Hounds that differ only in coat colors. These types also have different quarries. A Bernese Hounds quarry is the hare, wild boar and deer are for the Jura Hound, the Lucerne Hound that is very similar to the Blue Gascony Hound hunts deer. The Schwyz Hounds quarries are rabbit and hare. These hunting dogs are very versatile. They can hunt individually or in packs. Swiss Hounds are independent hunters. The dog would not wait for the commands of its master and would show great determination to flush out and to track the prey.

The remarkable hunting ability is not the only reason why this breed is highly esteemed. A Swiss Hound is a beautiful breed. The lithe body is well proportioned and muscular. Very independent when trailing and flushing a prey, this dog is known to have a sensitive nature that makes it a wonderful companion and a family pet. The Swiss Hound forms a strong attachment to its master. This breed makes a wonderful jogging, hiking and biking companion. However, because the dog is a friendly breed, it is not a most reliable watchdog. Other hounds will alert the family to the presence of strangers. This hound will meet the intruder with a wagging tail.

The Swiss Hound has the hounds stubborn personality. Training can be challenging and if the dog is to be a well mannered pet, socialization and training must be started from day one. Motivational training methods are proven to be more effective for this breed.

This breed is not for a weak master. Dog experienced owners will be the leader of the pack and would make the dog understand that it ranks below all the other family members.

The four varieties of Swiss Hounds are the Bernese Hound, Jura Hound, Lucerne Hound and the Schwyz Hound. These four variants have fine well fitting supple skin that is covered by short dense hair. Hair on the head and on the ears is finer. The only difference lies in the coat color. A Bernese Hounds white coat is covered with black patches. The dog can also have a black saddle. The Jura Hound has a beautiful tan coat with black blanket. A predominantly black coat would have tan markings in the eyes, cheeks and legs. Blue coat that results from a black and white hair combination is for the Lucerne Hound. The Schwyz Hounds white hair has orange patches. The dog may also have an orange saddle.

The Swiss Hound has a rounded noble head with a defined stop. The finely chiseled muzzle has a straight nasal bridge that ends in a black nose with well developed and wide open nostrils. Eye color that corresponds to the color of the coat can either be dark or brown. Eyes are slightly oval in shape and have a soft expression. This breed has long ears easily reach the tip of the nose when drawn out. Supple ears have rounded tips and well covered with fine hair. Set on below the eye level the ears hang down folded and twisted.

This breed had a muscular well proportioned body. The muscular but elegant looking neck has loose skin but no dewlap can be noticed. A Swiss Hounds back is firm and straight. Flexible loins are well muscled. The chest is well let down and the belly is slightly tucked up. Tail is set on as a continuation of the croup. The elegant medium length tail tapers to the tip. At rest the tail hangs without forming a distinctive curve. When the dog is alert, the tail is carried higher than the top line.

The Swiss Hound is a passionate and tireless hunter. This breed that was born to hunt would always be eager to go with the master to pick up a scent and to trail a prey. Because the dog has a docile and calm temperament, they are also commonly seen in homes performing the role of a loyal and affectionate companion of the family. A Swiss Hound would do well in a non-hunters home as long as the master has an active life. This dog would make an ideal jogging and hiking companion. Sociable, easy going and friendly, this breed would make a suitable pet and playmate of the children. Because Swiss Hounds love children, they would be wonderful playmates of younger children as the breed would be very protective and would tolerate the rough handling that the kids would dish out. This dog enjoys the company of canine and non-canine pets. Because of high exercise requirements, this dog would not be suitable in an apartment. A Swiss Hound should have access to a fenced backyard where it can expend its excess energies. An under exercised Swiss Hound would be difficult to handle. The dog would also develop destructive chewing and digging behavior. This breed is noisy when it hunts. A bored Swiss Hound would certainly be an annoying barking dog.

A Swiss Hound has simple grooming needs. A curry comb run over the coat once or twice a week would make the coat gleam and maintain its good condition. This hound is an average shedder. Regular brushing would remove loose hair. This is a healthy breed with no known major health concerns. The Swiss Hound though is prone to ear infections and as such regular ear cleaning is necessary.

The Swiss Hound is a breed of hound whose origin can be traced back to the ancient times. A mosaic that depicted pack hounds of very similar appearance was found in the Swiss municipality of Avenches. The mosaic was noted to have been done during the time of the Roman Helvetia. This breed was speculated to have been developed in the Swiss-France border during the 1500s. Swiss hunters wanting a hunting dog that is lean but strong to be able to work in high elevations of the Swiss Alps have crossed the Porcelaine with Switzerlands native breeds. The Swiss Hound was widely sought by Italian dog enthusiasts during the 15th century. In the 18th century, the French discovered the remarkable hunting aptitude of this breed. The native lines of this breed were speculated to have been influenced by the French hounds brought by returning soldiers to Switzerland. However, the Swiss Hounds, unlike its French Hound cousins have no English blood running in their veins.

Originally there were five types of Swiss Hounds – the Thurgovian Hound, Bernese Hound (Berner Laufhund), Jura Hound ( Aargonian Hound), Lucerne Hound (Lucernes Laufhund) and the Schwyz Hound (Schwyzer Laufhund). At the 1882 Aarburg Exhibition, various hounds were shown. The five basic types of Swiss Hounds that differ in size and color were shown. A separate standard for each of these Swiss Hound types were established in 1882. At the turn of the 19th and 20th centuries, the popularity of the breed started to decline. Breed enthusiasts tried to save the Swiss Hound by establishing a breed club in 1903 that has a goal of improving the breed through careful selective breeding. In 1909, the standards were revised. Also during this time, the Thurgovian Hound that originated from eastern Switzerland totally disappeared. In January 22, 1933, a uniform breed standard for the remaining four types of Swiss Hounds was established. Because of planned breeding the Swiss Hound types now only differ in coat color. The Bernese Hound which was named after the Bernese Alps and utilized to hunt deer in packs has a marbled black and white coat, the Lucerne Hound also known as the Luzerner Laufhounds blue or grey coat is speckled or marbled, the Schwyz Hound or the Schwyzer Laufhund has a white coat with orange patches. Unfortunately, the Jura Hound, a breed with typical Saint Huberts appearance and a tan coat with black saddle has also gone extinct. Each of these varieties was also downsized when the Swiss Hound was crossed with bassets.

Today the Swiss Hounds are still hunted in its country of origin although the breed is relatively unknown in other countries.