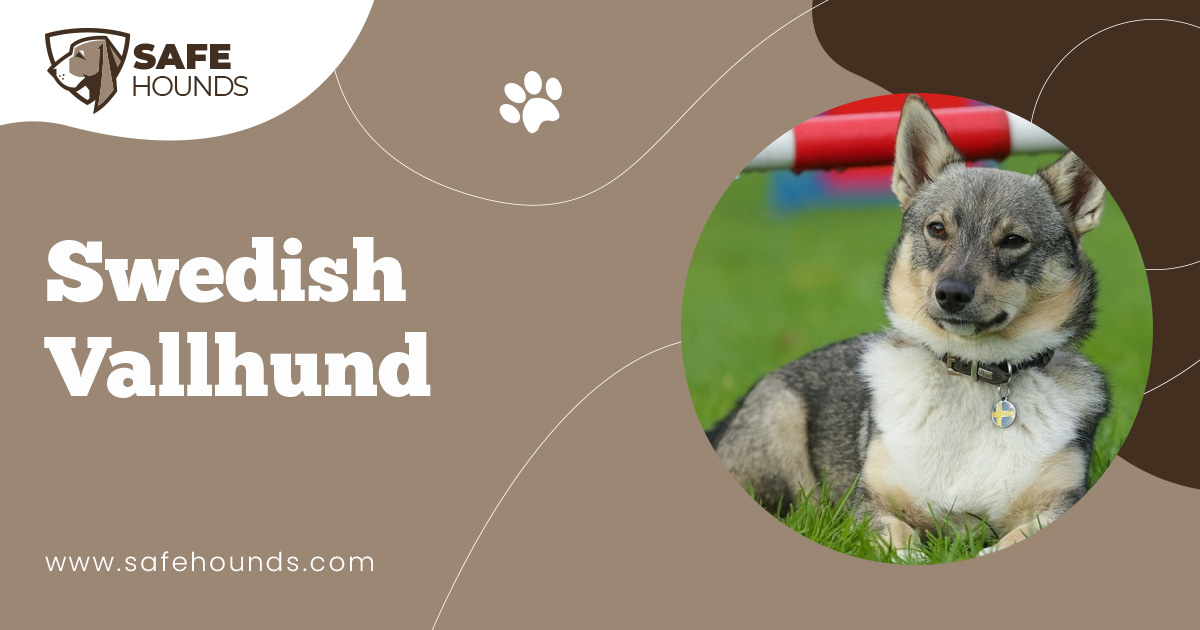 The Swedish Vallhund also known by Swedish Cattle Dog, Swedish Shepherd, Vallhund and Västgötaspets commonly referred to as the little cattle dog of the Vikings. From the time of the Vikings, this small dog was used to herd cattle, catch vermin such as rats, while guarding the home and property.

It is believed the Skye Terrier and the Welsh Corgi are to be descendants of the Swedish Vallhund. However, this adorable little dog was almost lost by 1942. Their extinction was close at hand. However, Bjorn von Rosen and Karl-Gustaf Zettersten from Sweden stepped in and began the search for Swedish Vallunds they could breed to keep them alive. They succeeded in their venture of course, and the breed was recognized by the Swedish Kennel Club in 1948. At the same time, they were given the name we know them as today, Swedish Vallhund, which translates to mean, herding dog.

The classification and breed standards for the Swedish Vallhund are as follows: FCI – Group 5 Section 3 #14, AKC – Herding, ANKC – Group 5 Working Dogs, CKC – Group 7 Herding Dogs, KC (UK) – Pastoral, NZKC – Working, and UKC – Herding Dogs. This breed is known for being powerful, watchful, full of energy, alert, and very friendly. He is also one breed that is not for any severe health problems.

The coat is medium length, which has a harsh topcoat that is close and tight with a soft and dense undercoat. The hair on the head and foreparts of the legs is rather short, while the hair on the neck, chest and back parts of the back legs is longer. The color of the coat is a sable pattern in colors of gray through red with a variety of combinations. The lighter shades are acceptable and often desired on the belly, chest, lower legs, feet, hocks, and buttocks with darker hair on the back, neck, and sides of the body.

The head of the Swedish Vallhund is long that forms a wedge from the skull all the way to the tip of his nose. the eyes oval shaped and of medium size which are dark brown with black eye rims. The ears should point and prick which are set at the outer edge of the skull. The hair should be smooth on the ears.

He or she has s long strong muscular neck with a level topline. The chest will have good depth while the underline is a bit tucked up. The back should be well muscled with a short and strong loin. The tail will be long, stub, or bob and can be docked if desired. However, all tails are acceptable.

The fun loving Swedish Vallhund is an awesome companion that is often referred to as a clownish breed. He loves attention from his owners and loves being center of attention. He does well with children that are kind to him. He may be stand offish with new people but once he knows they are okay, he desires their attention as well.

The Swedish Vallhund is energetic, fearless, intelligent, alert, watchful, friendly, active, and well mannered. He does tend to be a barker, but that is what makes him a great watchdog. He is great as a herding or companion dog.

The Swedish Vallhund will do quite well living in an apartment, however, he will need sufficient exercise. They are active little dogs but will need to be taken on a short walk every day.

This breed will need to be groomed however, it is pretty easy to do. You should comb or brush their hair with a firm bristle brush, but only give them a bath when they are really dirty.

For them to get along well with others especially other dogs, they will need a bit of training. Males do have a tendency to be a bit aggressive with other males dogs of any breed.

What is known as true fact is that the breed was near extinction in 1942 until Bjorn von Rosen and K.G. Kettrsten worked together to save the breed. They searched to find a few of the breed and began their work. The male was Mopsen and three females Vivi, Lessi, and Topsy. From these dogs, the breeding began and from five of the offspring came all Swedish Vallhunds we have today.

Today, the Swedish Vallhund is still a rare breed but those that have one in their home enjoy taking them along when hiking, riding trails, driving, and vacations. The breed is more common in Sweden, Britain, Finland, Norway, and Australia. The Swedish Vallhund is just now becoming more noticed in the United States from the recent recognition of the United Kennel Club, The Canadian Kennel Club, and the American Rare Breed Association.