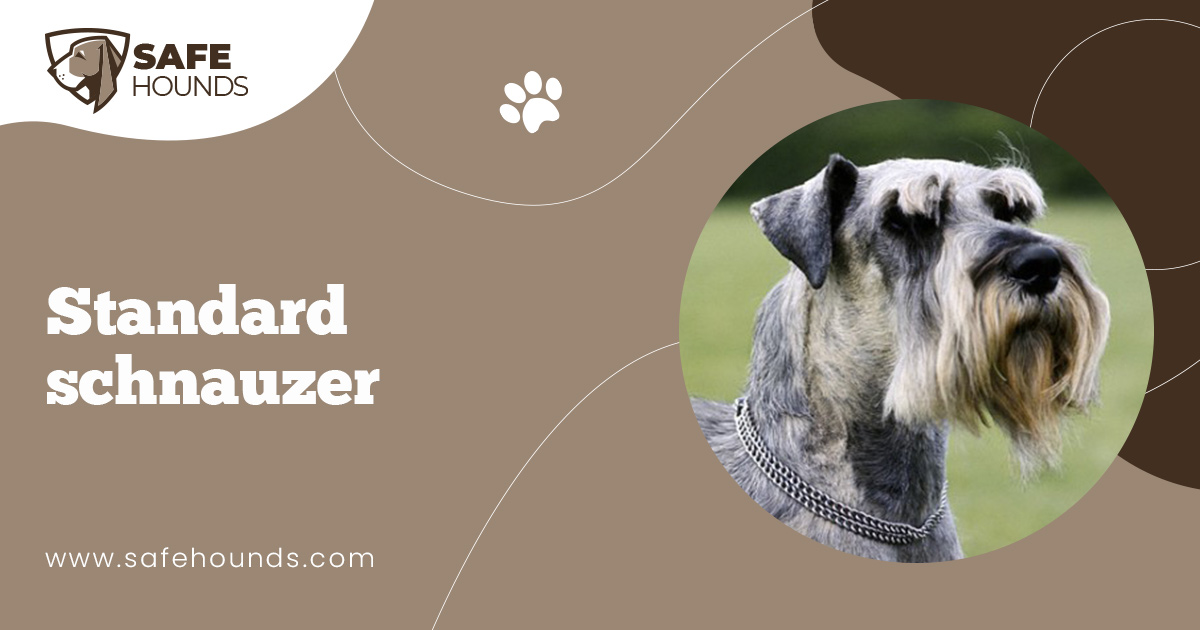 When you first see the standard Schnauzer you may believe that he is related to other British Terriers, however, this is not true. The Standard Schnauzer is the original breed of all three types of Schnauzers with origins in old herding and guard breeds of Europe. The beauty of the breed is from wiry coat along with the noble whiskers that distinguishes them from other dogs much in the way that gives them not only a noble appearance but also one of wisdom.

The Standard Schnauzer is often called by alternative names such as Schnauzer, Schnauzer-Pinscher, and Mittelschnauzer. The Schnauzer is also referred to as the only dog with a human brain. They are known for their handsome demeanor and aristocratic stance.

The Standard Schnauzer is robust, sociable, alert, and can be a comedian at times. He or she enjoys the company of their family while guarding and protecting the family is of course part of their nature. The affection bestowed upon family members is one of love and devotion. If raised correctly, the Standard Schnauzer will be a loyal companion even with young children. They are not prone to excessive barking, but are sure to bark when the need arises.

The most impressive feature of the Standard Schnauzer is their strong arched eyebrows, whiskers, and beard which also brings to mind nobility and wisdom. Their head is long and rectangular with a strong muzzle and defined stop. Their nose is black with oval dark brown eyes. The teeth fit in a scissor bit.

The coat of the Standard Schnauzer is tight, wiry, hard, and very thick with an undercoat that is soft. The outer coat is trimmed by a process called plucking that is only done to show off the outline of the body. In shows, the coat of the Standard Schnauzer is very important with lengths measuring ¾ to 2 inches. The hair on the head, ears, chest, neck, belly, and under the tail should be trimmed close especially to show off the majestic beard. The coat color is either all black or salt and pepper.

The Standard Schnauzer has feet that are small and similar to a cats with arched toes. The tail is normally docked at the fourth vertebra. Ear cropping is optional. All dewclaws should be removed. The forelegs are straight while the rear legs along with thighs should be slanted just a bit and muscular. The topline also slants a bit downward from the withers to the backend.

The Standard Schnauzer has a personality that is known among terriers such as lively, fearless, high-spirited, loving, clever, affectionate, and is an awesome watch or guard dog.

In many cases, the Standard Schnauzer is very protective over his family and even objects. Without the proper training he may become overprotective which can mean trouble if you have little ones in the home. However, if correctly trained while young to interact with the family he will do very well, but he is better with older children that treat him with respect.

They do not bark as much as most terriers, but will certainly bark when the need arises such as strangers approaching their territory. They are very devoted to their family and make excellent guard dogs. Standard Schnauzers are also considered great hunters on land and water, excellent herders of sheep and cattle, along with being a loyal companion.

The Standard Schnauzer can do very well living in an apartment and will remain active even without a yard in which to romp and play. They are very energetic and do require quite a bit of exercise. A long fast walk every day will normally do fine, however, if you can let them run in their own yard they will so do willingly.

The outer coat does not need much care, however, the soft undercoat can become matted if not combed or brushed daily with a short wire brush. Twice per year the coat should be clipped to an even length usually in the spring and then again in the fall. The whiskers need to be cleaned after meals and the eyebrows trimmed. They do not have an odor and do not really shed.

The Standard Schnauzer is a German breed like all Schnauzers named after the German word for muzzle, Schnauze. This breed is more than likely the oldest breed of Schnauzers. During their history they have been known to accompany coaches, hunt vermin, used as messengers during World War I, and guarded stables along with farms. Many times, the Schnauzer was used to watch over children where they received the nickname kinder watcher. Not only has the Schnauzer been used in all kinds of guarding capacities but has been trained to guard livestock and even retrieve prey which was a great asset for hunters.

During the mid 19th century German dog lovers took an interest in the Schnauzer and began crossing the breed with the gray Wolfspitz and the black German Poodle, which has given the Standard Schnauzer we know today the salt and pepper coat. During this same time, the Schnauzer was also being crossed with a variety of breed to develop the miniature and the Great Schnauzer. The original name for the Standard Schnauzer was Wire-haired Pinschers and was first seen in the 1870s, however, by the turn of the century the breed was referred to from the German word Schnauze meaning muzzle referring to the bristly beard and moustache.

Today, the Standard Schnauzer is known for his work with the American Red Cross as a guard dog, drug and bomb detection, and for their work in search and rescue. Other talents that cannot be ignored include hunting, retrieving, tracking, watchdogging, guarding, agility, military work, competitive obedience, performing tricks, and a loyal companion for the family.