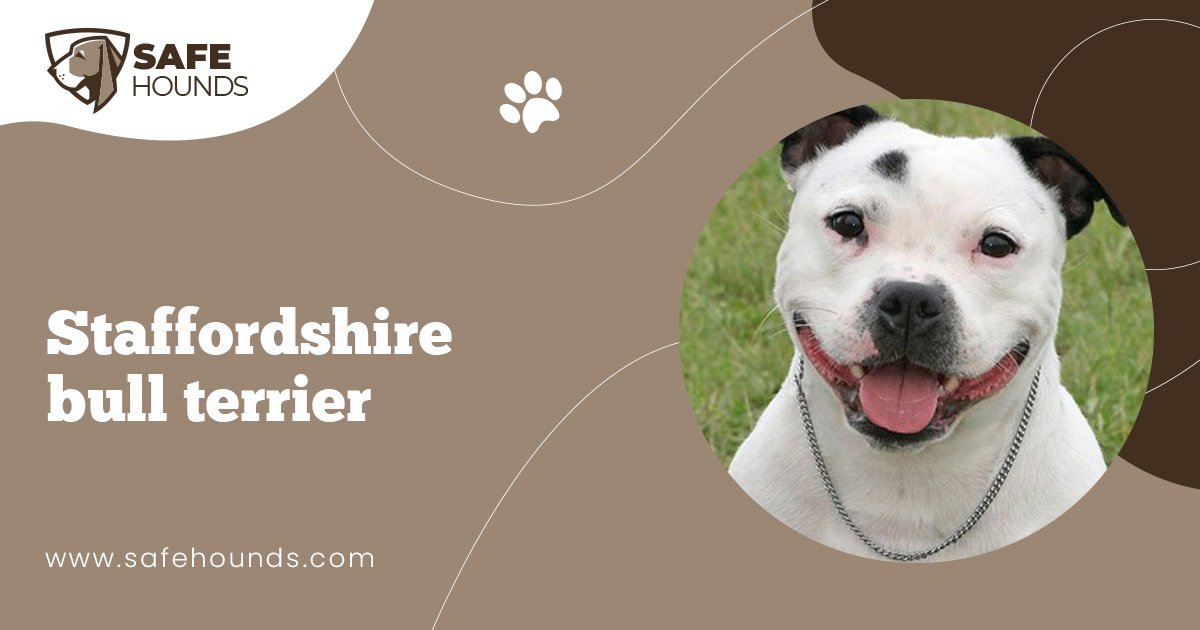 The Staffordshire Terrier is a medium sized old breed of dog with a short coat, which was bred for bull and bear fighting. The Staffordshire Bull Terrier is often grouped together with the American Pit Bull Terrier and other Terriers will similar body build and colors. Because of this, many believe is ferocious and dangerous. However, all of these breeds are different and should not be grouped together. In fact, there are no bad dogs, only bad masters. Some may be born with an aggressive nature, but if handled properly will be a wonderful pet.

Many of these wonderful dogs have been held responsible for attacks on humans when it was not this breed but one of their cousins that was responsible. Today, you will normally find only two groups of people when it comes to the Staffordshire Bull Terrier, ones that love the breed and ones that hate breed. Because of this many terrier type dogs are banned in various locations thorughout the world, such as is seen in Denver, Colorado with the Code stating in the ban any dog that is an American Pit Bull Terrier, American Staffordshire Terrier, Staffordshire Bull Terrier, or any dog displaying the majority of physical traits.

In Austrailia, the Staffordshire Bull Terrier is the fourth most popular behind just under the German Shepherd, Labrador Retriever, and the Golden Retriever.

The Staffordshire Bull Terrier stands between 14 to 16 inches tall at the shoulders with females weighing in at 24 to 34 pounds and males at 28 to 38 pounds.

The coat is smooth, short, and should not be trimmed. The Staffordshire comes in a variety of colors such as blue, black, fawn, and red with white. All shades are accepted for the brindle with white. The only color that is disqualified is black and tan or liver.

He stands with a muscular and powerful look with a broad head and extremely strong jaws. His muzzle is short with distinctive cheek muscles. The stop is defined.

The Staffordshire Bull Terrier has dark eyes most commonly brown, however, they can be close to the coat color. The eyes are round and should not have pink rims unless the coat around the eye is white. His teeth should meet in a scissor bite. Ears are not large and should be rose or half priced.

He has a strong, short, muscular neck, which widens a bit at the shoulders. The topline is level, wide front, with a deep brisket and well-sprung ribs. The tail is not undocked and is medium length, low set and tapers to a point, which is carried low.

The feet of the Staffordshire Bull Terrier is well padded, strong, and medium sized. Dewclaws on the forelegs and hindquarters are both removed.

Everything about the appearance of the Staffordshire Bull Terrier shows strength and power from his stance to his muscular strong body.

The Staffordshire Bull Terrier unlike popular belief enjoys life to its fullest no mater what he is doing he puts his own body and soul into the activity, not aggressively. He is courageous but also very obedient. He is affectionate and loves to be around people. On the other hand, he can be a bit backward with strangers at first but in a few minutes ready to play or get their full attention.

In most cases, the Staffordshire Bull Terrier is great with all other pets but may not do well with other dogs that invade his territory. He does do well with children of all ages as long as they treat him kindly. He loves and protects his family.

They do require firm, experienced training since they can be stubborn.

Apartment living is fine for the Staffordshire Bull Terrier as long as he receives enough exercise. he does not need a large yard, a small yard will do just fine. However, he does require lots of exercise and must be on a leash or he is apt to run off on his own adventure.

He will need to be brushed every now and then with a firm bristled brush and bathed when needed. To ensure you rid him of the loose hairs you will need to towel dry this coat after the bath.

Training should begin when the Staffordshire is a pup at a time when he is quick to learn.

In the 20th century interest began to grow again mainly in the United States. by 1935, they were beginning to be seen in the show ring. In the US, the American Bull Terrier is a bit larger than the Staffordshire Bull Terrier and is considered two different breeds.