A Sporting Lucas Terrier is a breed of sturdy dog developed to hunt vermin. Because this breed has to go to ground if necessary, its small stature, compact and well boned body proved to be an asset. A Sporting Lucas Terrier approximately measures 12 inches at the withers. The dog has a predominantly white stiff coat with variedly sized dark colored markings. Dark coated individuals with small white patches also occur. A Sporting Lucas Terrier has the typical lively and spirited personality of a terrier. This dog has free and easy movements very agile and full of enthusiasm. The flexible spine, the sturdy legs with its strong feet, well formed pads and strong nails as well as the powerful jaws make this breed a formidable enemy of vermin. Noted for its high prey drive, this breed that is always eager to hunt makes an excellent companion of an avid hunter. A Sporting Lucas Terrier is noted for being an outstanding ratter but it also hunts minks, foxes and other game. This versatile breed retrieves partridge and pheasants. A wounded game has to be found to be humanely dispatched. This small dog is highly valued for its ability to find wounded deer. The dog has excelled in agility trials and because of its well balanced personality this small dog has become a wonderful addition to the family. 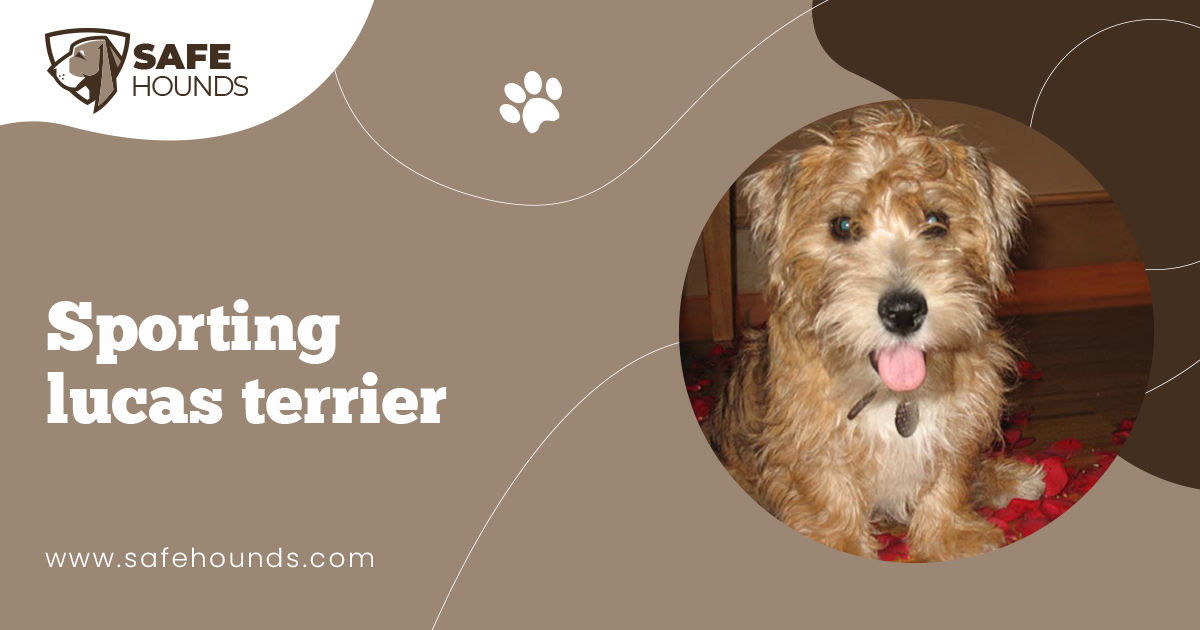 The Sporting Lucas Terrier was primarily developed to have a small body as this breed would have to go to ground to follow its prey. This breed is only about 12 inches in height and weighs about 15 pounds. This low stationed breed has a compact well boned body. A terrier is a lively breed, always full of life full of bustling energy. This dog has a purposeful good stride, the demeanor giving the impression of perky assertiveness and enthusiasm.

The strong and well boned head is proportionate to the size of the body. The broad skull has a good width between the ears. This breed has a well developed stop and a muzzle that slightly tapers to a black nose. The Sporting Lucas Terrier is an excellent ratter and hunter of small game. The dog is equipped with strong jaws that are built for gripping and biting. White and evenly spaced, the complete set of teeth meets in a scissor bite. Dark oval shaped eyes are set rather deeply and fairly wide apart. Ears are set on high and widely apart. V shaped rounded tipped ears are half pricked and hang forward close to the head even when the dog is alert.

A Sporting Lucas Terrier has a strong slightly arched neck. Of good length, the neck blends smoothly into the well constructed shoulders. This breed has an oblong shaped body and a strong level back line. The strong and supple loins are slightly arched, the croup slightly sloping and the underline has a slight tuck up. The brisket is deep reaching or even below the level of the elbows. Straight forelegs have discernible muscles but not too heavily boned. Hindquarters though are well muscled. Small feet have rounded strong pads, strong toes and nails. Set level with the topline, the tail that is commonly docked to less than 4 inches is carried erect but not over the dogs back. The Sporting Lucas Terrier is a double coated breed. The undercoat is thick and dense. The topcoat that grows to about 1½ inches long lies close to the body. The straight outer coat is stiff and harsh. This breed has two acceptable coat color combinations. The coat can be shades of brown, grizzle and tan or black and tan. This coat type can have small white markings on the chest, brisket and feet. The dog can also have a predominantly white coat with shades of brown, black, grizzly or badger grey markings.

The Sporting Lucas Terrier is a confident and a very determined dog. This dog has the typical terrier personality but unlike other terrier types, this breed has a more stable temperament. The dog gets attached to its people. It bonds closely with the children and makes a patient, gentle and lively companion. A Sporting Lucas Terrier is a small breed but it is very capable of watching and guarding the home and its occupants. The dog is leery with strangers and would instantly let its people know about the presence of intruders. The dog is a keen hunter. The dog would persevere in very difficult hunting conditions. When hunting, the dog will show aggression and offensive approach. However, this is not really an aggressive breed. The dog is often hunted with other dogs thus it tolerates other canine pets of the family.

This breed needs very little grooming. Brushing the coat weekly would be enough to maintain its good condition. The dog must be bathed only when necessary. This dog would do well in a home in the country or in an apartment in the city as long as the dog is taken on daily walks.

A lot of present day dog breeds origins are shrouded in mystery. The breed could have developed from natural selection and how the dog developed is unknown. It is also possible that an ancient dogs precise history was lost in the mist of time. Prospective dog owners would usually research the history and the temperament of the chosen breed. But as in most cases, even long time breeders would only have a vague idea on how the breed was developed. A Sporting Lucas Terriers origin is well documented so that there will be no it was speculated or it was commonly believed statements when it comes to the history of this modern breed. The Sporting Lucas Terrier is one of the breeds with a precise history.