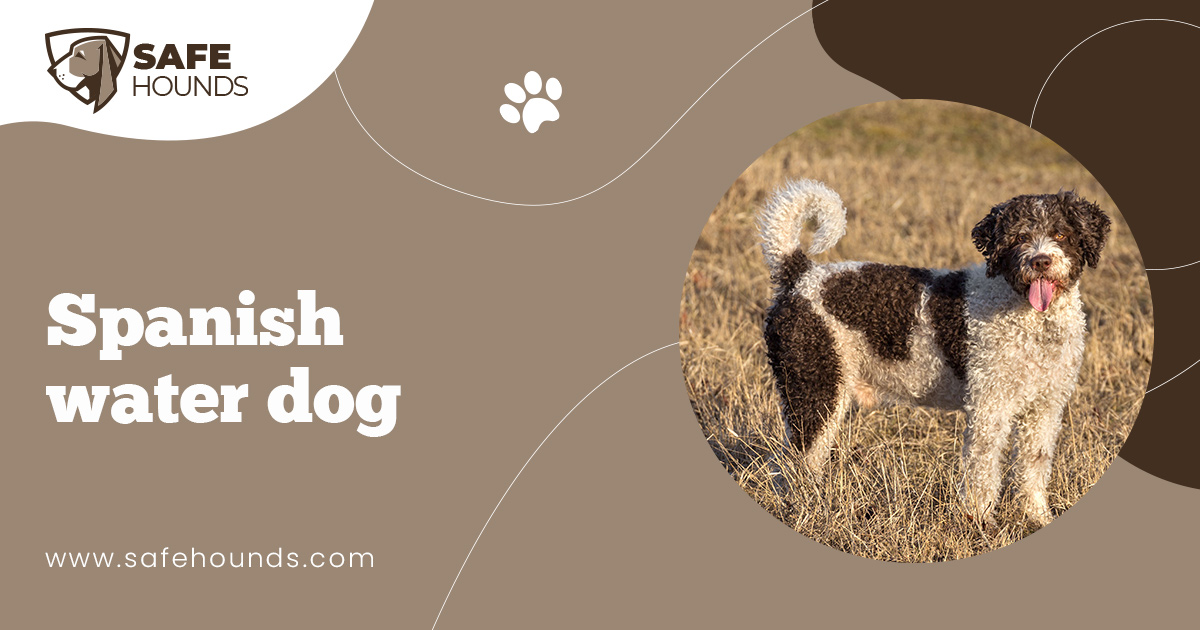 The Spanish Water Dog is a medium sized herding dog that has a curly coat that is quite distinctive. This breed is slightly longer than tall. The Spanish Water Dog is a versatile dog which is used to gather and drive goat, sheep and other cattle. It has been performing these tasks for centuries in Spain, which is its native country. This breed has also been used as a general farm dog. On a few occasions, it has also been used as a fishermans assistant.

The Spanish Water Dog will do well with an owner who is active. They really need an experienced owner. This is not the best choice for a first time dog owner. This breed tends to respond better to positive training. The Spanish Water Dog is not usually good around very young children. This is mainly because they have a very strong herding instinct and they tend to chase objects that move. That being said, they are good with children in general.

These are dogs with high energy and they need an outlet to release their pent up energy. This breed has strong instincts to protect its owner. It also have very strong herding instincts and they tend to be wary of people it does not know. Very early in its life, the Spanish Water Dog should be exposed to various situation and various types of people. They need to be socialized at an early age.

The Spanish Water Dog has a life expectancy of between 10 – 14 years. As long as this breed receives sufficient exercise, they can adapt to almost any environment or circumstances. They can handle extremes in temperature, including extreme cold extreme heat.

The Spanish Water Dog has an appearance that is medium weight and a well proportioned body. The head of this breed is described as being held with elegance and in a strong manner. The nose of the Spanish Water Dog is either the exact same color or a little darker than the coat. The lips are described as well-fitting. The teeth of this breed as well developed and white. The eyes are the color of hazel to chestnut color and should go along with the coat color.

The Spanish Water Dog can accurately be described as very intelligent and well balanced. They have very strong instincts to guard, hunt, and herd. This breed has the temperament to make great companions who are devoted to their family. They have exceptional agility, stamina, and strength.

The Spanish Water Dog should not be shy although they are reserved around strangers. Some people have described this breed as a large dog in a medium body. This breed has the tendency to be territorial and protective so they should be socialized beginning at an early age. Even though the Spanish Water Dog makes a good companion, they shouldnt be left alone and unsupervised with very young children. This breed should be kept active (both physically and mentally). That is because of their instinct to work hard and because of their high intelligence.

If your Spanish Water Dog is going to be a working dog, then you may want to shave your dogs coat often. This will be helpful for the dog while it is hunting. As this is a rustic dog, you do not want to brush its coat. Bathe the dog only when necessary and use a mild shampoo.

If your Spanish Water Dog is going to be a show dog, it should never be groomed aesthetically. The coat of the dog should be sheared down about once yearly.. Most recommend using a #5 blade. That will leave about one fourth of an inch of hair. A couple of times a week, you should check behind the ears and separate cords that might have become bound together. This breed does not shed and is single coated.

The Spanish Water Dog is a very old ancient breed. However, its exact origin is not conclusively known. There are a number of theories concerning the history and origin of this breed.

According to one account, it has been suggested that Turkish merchants brought the Spanish Water Dog along with other types of livestock to the South Iberian Peninsula. Another account suggested that this breed has a North African origin. Even though these theories can not be 100% confirmed, there is written documentation that in 1100 AD, there was a woolly coated dog that was present on the Iberian Peninsula. Most historians agree that these woolly coated dogs were the predecessors to the most water dogs.

As the Industrial Revolution began to make its presence felt in northern Span and Madrid, shepherds in other areas of Spain began to replace their herding dogs with Belgian Shepherds and German Shepherd dogs. However, in the southern part of Spain, the Spanish Water Dog did better and that continued to work, especially in mountain areas. Also, in various port areas, the Spanish Water Dog was used to help tow boats to shore.

To this day, the Spanish Water Dog is still working in southern Andalucia in Spain in the mountainous areas. They continue to herd sheep and goats in primarily the same way they have for one thousand years. They also perform more modern services for the Spanish government. They now help with bomb sniffing and search and rescue.