The Spaniards are renowned for their love of bull fighting. The deafening Olé! in a bullring signifies the fun loving nature of these people. Because bullfighting is the most popular sports in Spain, not many people are aware that a breed of gun dog noted to be one of the best dogs in finding game calls Spain home.

Thought to be a descendant of the Perdiguero Navarro (Old Spanish Pointer) and from another scent hound breed from Spain, the Sabueso Espanol, the Spanish Pointer is a large hunting dog that appears to be bigger than its actual size because of the thick skin that covers its skinny but muscular body. The skin that gives the dog a heavy and rugged appearance is an inherited physical feature from the Sabueso Espanol. The breed has a short smooth coat that comes in combinations of grays, blues and browns. 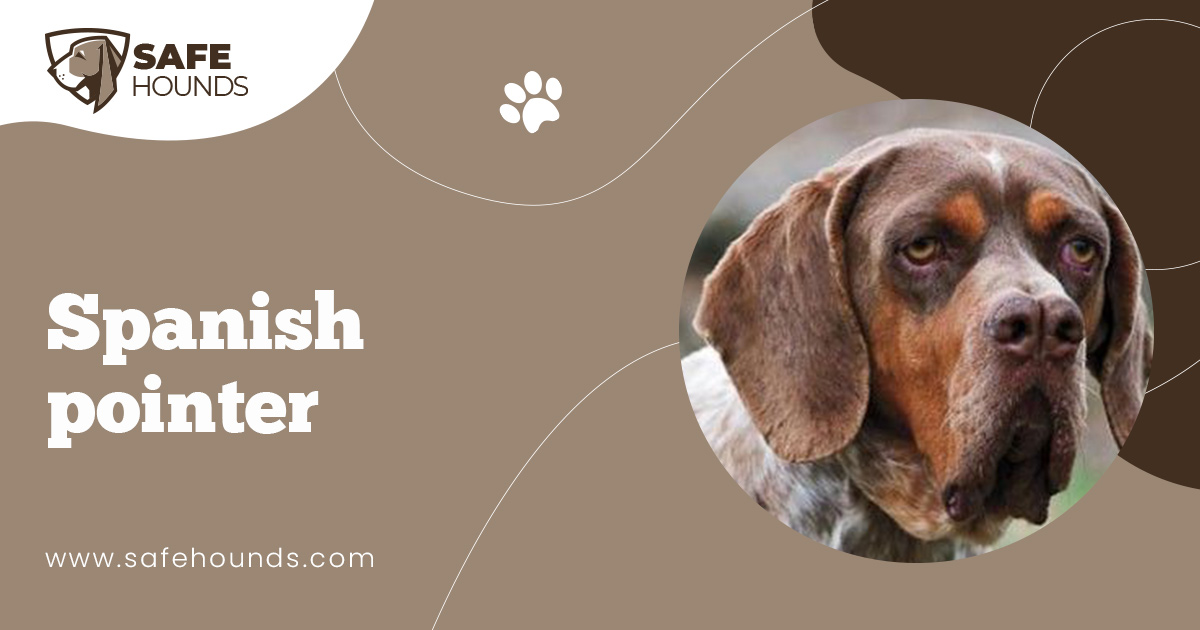 The Perdiguero de Burgos, as the breed is referred to in Spain is a diligent and passionate hunter. The dog was once considered to be a deer specialist. Spanish Pointers then have a cumbersome appearance and were rather slow on their feet but the scenting prowess is second to none. This pointing breed can even qualify as a scenthound. Breeders have refined the hunting qualities of the breed. The Spanish Pointer has become an excellent bird hunting dog although the dogs size was reduced. Modern day Spanish Pointers are smaller, standing about two thirds of the breeds original height. However the dog gained speed and agility. The Spanish Pointer is now a much faster gundog that can easily scale steep and hilly terrain. Spanish Pointers are now utilized to point hare, partridges and quail. This surefooted dog that can cover difficult terrain is an excellent swimmer too. This outstanding breed works equally well on land and water. This is an obedient breed with the inherent canine eagerness to please attitude. Easy to train and used to ignoring distractions when pointing, a Spanish Pointer also excels in hunting trials.

The Spanish Pointer is a beautiful athletic breed of gundog with a noble appearance. This breed has a large, broad and well developed skull, a slightly marked stop and a straight, broad, square shaped muzzle. The broad nasal bridge is tipped by a large, wet, dark brown nose with well opened nostrils. The medium sized almond shaped dark hazel eyes have a soft and noble expression. Medium thick, brown pigmented eyelids add to the dogs sad appearance. Large ears are triangular in shape. Set at eye level, the long soft ears hang gracefully close to the head in corkscrew fashion.

Strong and powerful neck has well defined double dewlap. A Spanish Pointers square body gives the impression of power and agility. This breed has a straight horizontal topline, well defined withers and muscular back. The broad chest is deep reaching the level of the elbows. Rounded ribs are well developed. The belly is moderately tucked up. Tail that has a thick base is set at medium height. In countries where docking is permitted, the tail is docked to one third or one half of its length. This breed has muscular shoulders and strongly boned forearms. Powerful hind legs have strong well developed thighs. The thick elastic skin gives the dog a rather heavy appearance. A Spanish Pointer has a smooth short dense hair that is evenly distributed all over the body. Basic coat colors are white and liver. These colors when combined would give the dog a liver marbled or a speckled coat. A heavy ticked coat gives the dog a grizzled appearance. A Spanish Pointer may have a white patch on the forehead.

A Spanish Pointer is an excellent gun dog noted for having an outstanding temperament. These well behaved dogs are noted to be intelligent, obedient (just like any other gun dog) and fairly easy to train. This is a gentle breed. A Spanish Pointer loves its people and known to be very patient with children. This dog would tolerate rough handling from the kids. The dog is tolerant of other dogs as well. However it must be remembered that this is a hunting dog with a high prey drive. The Spanish Pointer is dangerous around smaller pets.

Exercise is very important for this breed. Because a Spanish Pointer has great energy it would be a most suitable choice for an active family. Apartment living is definitely not for this breed as the dog would need huge open spaces. A rather large yard would do and be sufficient to ensure that the dogs excess energies are expended. An under exercised Spanish Pointer will be difficult to handle and can even be destructive.

A Spanish Pointer has minimal grooming requirements. This breed is an average shedder. Regular brushing using a firm bristled brush would take care of the loose dead hair. Bathing may be done when the dog gets extremely dirty. Otherwise, rubbing the dog with a damp towel or a chamois cloth would be sufficient to clean the dog and to maintain the gleam of the coat. Unlike other breeds whose pricked ears are cleaned and dried naturally by the wind, a Spanish Pointers pendulous ears would need to be regularly cleaned to prevent infections. Checking the feet for thorns and scratches would be a good idea especially if the dog has been hunting.

The Spanish Pointer also known as Perdiguero de Burgos has existed as early as 1600 in Spain. This gun dog is highly prized by Spanish hunters for its excellent scenting and pointing abilities. The Spanish Pointer is considered to be one of the rare breeds of gun dogs and is relatively unknown outside its country of origin. But what is notable about this breed is the fact that it has made a great bearing on the development of modern day pointing breeds. The Iberian Peninsula is speculated to be the origin of most of Europes pointing breeds. Famous pointing dogs of other countries like the German Pointer, the Russian Pointer, the French double nosed griffon as well as the well known English Pointer have traced their origins to the most esteemed pointing dog of the Spaniards, the Spanish Pointer.

Like other ancient breeds, the origin of the Spanish Pointer is quite unknown but it is probable that this outstanding breed has descended from the Old Spanish Pointer (Perdiguero Navarro) which was prevalent in Spain and in Portugal during that time. It is most likely that the Perdiguero Navarro was crossed with a breed of scenthound, the Sabueso Espanol. The Sabueso Espanol is a breed of scenthound with a peculiar bark and an excellent tracking ability. The Perdiguero Navarro is a hunting dog with an unusual split or double nose. This rather odd nose is believed to have given this breed its excellent scenting ability. The Burgos Pointing dog as the Spanish Pointer is also called has a rather ponderous gait. The dogs scenting ability however is most valued by Spanish hunters as the dog is considered to be a deer specialist. Spanish breeders have made considerable efforts to develop the Spanish Pointer into a bird hunting dog. The traits of the breed were refined but the dog was also downsized. Modern day Spanish Pointers are much smaller in size but they are faster and more agile. The dogs are now utilized in hunting partridges, quails and hares.

Already considered to be a rare breed, the Spanish Pointers population was greatly affected by the Spanish Civil War and the World War 11. The breed was close to extinction at the start of the 20th century. Don Manuel Izquierdo and Don Geardo Sardonil made tremendous efforts to revive and to save the breed. Their efforts paid off, the breed was revitalized. Spanish hunting enthusiasts and breeders have rediscovered the outstanding qualities of the breed. The Spanish Pointer, a breed that was heading for extinction is once again gaining tremendous popularity.