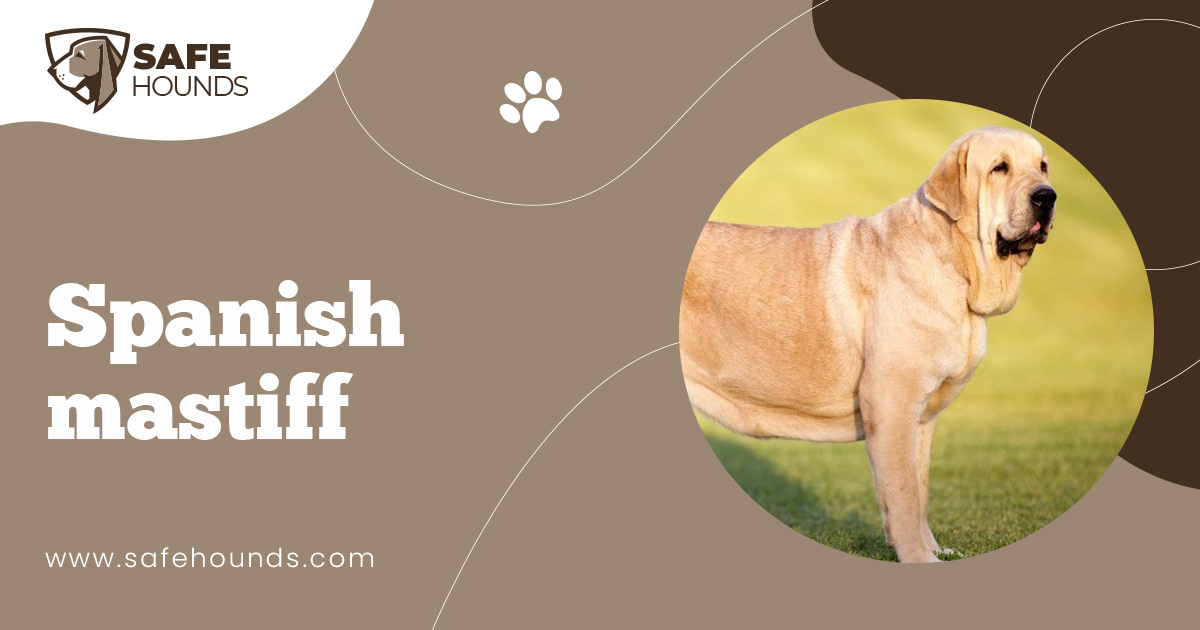 The Spanish Mastiff is a powerful dog the King of the mountains the defender of the sheep and the worst and formidable enemy of the wolves and other predators. This breed is also known as Mastin de Leon as this mastiff among breeds of dogs is what the lion is among feral wild animals. Having descended from the ancient Roman Molossus dogs that travelled with Alexander the Great throughout Europe, the Spanish Mastiff is noted to have the courage of its war dog ancestors. This flock guardian that was brought to Spain by the Phoenician traders was utilized to guard livestock in the Iberian Peninsula. This breed has originated from the Estramadura region of Spain. Origins of ancient breeds are commonly lost in the mist of time. This fact is true with the Spanish Mastiff as well although the breed is believed to have been around since 2000 BC. This robust breed was once used to hunt wild boar but the prime utilization of the breed is to guard and defend the livestock from wolves and from other predators.

This giant breed is a traffic stopper. The massive size and the magnificent bearing of this noble dog will not fail to generate attention. This breed is the largest among the dog breeds of Spain. Spanish Mastiffs are believed to be the largest livestock guardian dog (LGD) breed. This breed has the typical broad back and muscular body of a mastiff. This livestock guardian is characterized by a massive head. The face and the neck has copious folds of skin giving the dog a hound-like appearance. The thick loose skin is covered by a coat that lies closely to the body and comes in any color though yellow, fawn, black, red are most common. A Spanish Mastiff with a wolf or a deer color is a magnificent dog.

A Spanish Mastiff is a fast growing breed. An 8 month old dog can easily tip the scale at about 100 pounds. This breed has fewer health issues as compared with other large breeds. A Spanish Mastiff can live up to 12 years. The diet and the physical activities of a growing dog must be carefully monitored. A very heavy puppy allowed to have strenuous exercises can harm the growing bones and joints.

There are two types of Spanish Mastiff – the Mastin Pesado and the Mastin Ligero. The Mastin Pesado or the Heavy Mastiff is prevalent in the populous mountains of northern Spain. Known to have a more impressive appearance, this type participates in dog shows and expositions. A Mastin Pesado has a bigger head, more loose skin and more dewlaps. The Mastin Ligero being the lighter type has an athletic body and noted to be faster and more agile. This type of Spanish Mastiff is commonly found in Andalusia, Meseta and in other regions south of Spain.

A Spanish Mastiff is a rustic looking dog. This magnificent breed has a well boned and well muscled rectangular body. The massive head has the typical mastiff loose fold of skin. Loose skin on the trunk shaped neck forms ample dewlap. The rectangular muzzle tapers towards the big and broad black wet nose. For the size of the head, the almond shaped eyes are rather small. Dark hazel is the preferred color for the eyes that give a soft, attentive and intelligent expression. Attached above the eyelids, the medium sized triangular ears lie flat and hang down close to the cheeks.

The rectangular body has a straight topline, well marked withers and well muscled back. The powerful loin is long and broad. Broad deep chest has rounded ribs. The belly is moderately tucked up. Set at medium height, tail is very thick at the root and carried low with the last quarter curbed when the dog is at rest. On the move, the tail forms a slight curve at the tip and carried in sabre fashion. The short straight coat has thick undercoat. Any coat color is accepted for this breed although deer and wolf colors, red, fawn, black and yellow are most favored.

The Spanish Mastiff is a very interesting breed. The massive appearance would intimidate anyone. This intelligent and loyal dog has a noble bearing. A Spanish Mastiff does not give much affection and would not really mind if it receives cuddling and petting from its owners or not. This is not a very demonstrative breed although it is known to be gentle with the children. This dog is very protective of its family. The dog may appear to be placid, disinterested and even lazy but never make the mistake of giving the dog a reason to unleash its strength, power and ferocious personality. Remember, this dog is an LGD and it will die to protect its family. A dog that is made into a home companion would need obedience training and socialization. A Spanish Mastiff is leery of strangers and generally shows aggressiveness towards dogs and other animals. This dog is not suited for apartment life primarily because of its massive size. The dog would do well in a home with a big yard.

The Spanish Mastiff shed lightly throughout the year. During this period, occasional brushing would be enough to maintain the good condition of the coat. However, shedding is heaviest during spring and fall. The dog would need to be brushed more frequently to remove dead hair. This giant breed is not very energetic. Unlike other breeds that get very dirty coats, Spanish Mastiff would not need frequent bathing. Another plus factor in owning this breed is its average exercise requirements. Provide the dog with a large yard and you wont be troubled by the need to take the dog walking every day. It would even be better if the dog is given the task to guard the property or a few heads of livestock as it would be a good way to release his energies.

A mastiff is a breed of giant dog believed to have descended from ancient breeds like the Alaunt and Molosser. The massive head, the hanging flews, the ample dewlap on the neck and the loose skin folds on the body are characteristics unique to mastiffs. The word mastiff has two sources. The word could have been derived from the Latin word mastibe that means shepherd of flocks or from the word masuentos which means gentle and domesticated.

The Spanish Mastiff originated from the Estremadura region of Spain. It was thought that this very ancient breed existed in the Iberian Peninsula over 2000 years ago, way before the Roman invasion. The Spanish Mastiff similar to the other flock guardians in the Iberian Peninsula is believed to have descended from the Molosser dogs that were brought by the Phoenician sea faring traders from India or Syria. Verified records of Spanish Mastiff date back to 30 AD. The Georgics, a book written by the Latin poet Virgil and published in 29 AD made mention of this Iberian mastiff as the best guardian of the herd. This breed was also mentioned by Kolumela, the Roman agronomist.

The Concejo dela Mesta was a very significant period in the history of this breed. This is the large scale seasonal migration of Merino sheep from winter to summer pasture and back. In an 850 km hike, 3.5 million sheep will be herded by about 40,000 herding dogs and will be protected by about 18,000 Spanish Mastiff from the attacks of wolves and other predators. The breed was highly acclaimed for its superb guarding ability during these hikes. However, the seasonal migration became smaller and smaller in the 18th century until it was totally stopped at the outbreak of the war in Spain. From being flock defenders, the Spanish Mastiff was utilized in another manner. This time the dog was used in big game hunting. The hanging loose skin on the neck of the dog is an asset as large wild animals cannot sink their teeth on the most vulnerable part of the dogs body. A Spanish Mastiff is an extremely courageous dog. The massive body would be enough to arouse fear. Spanish conquistadores have used this breed in the battles against the Native Americans, Aztecs and Mayans during the colonization of the Americas.