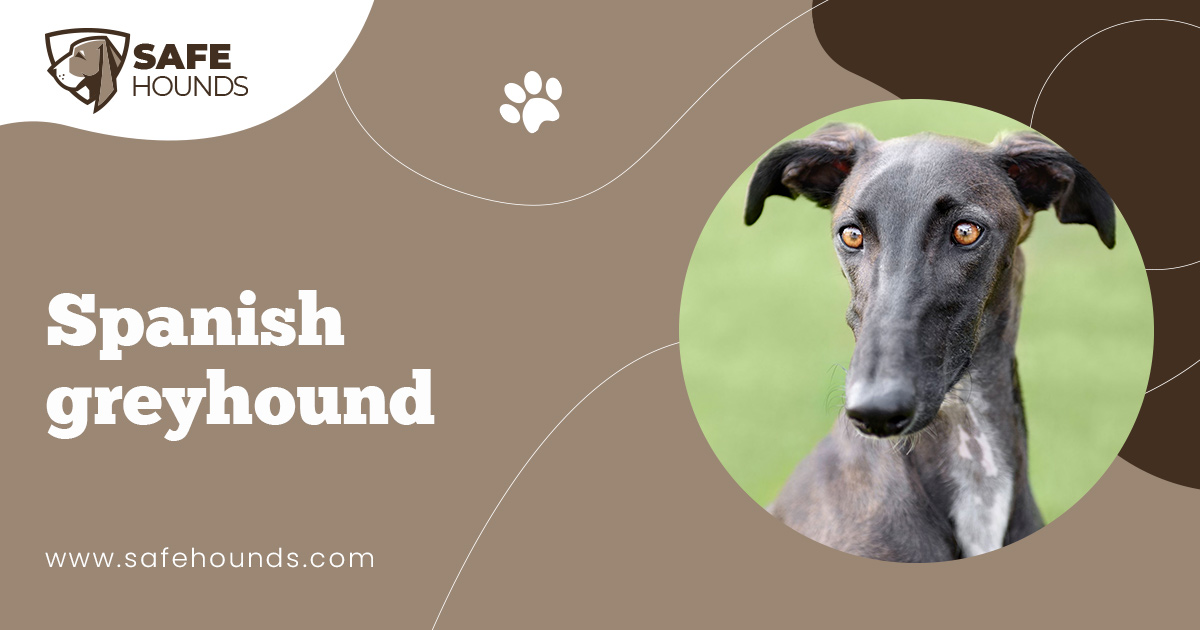 A specialized hunter of hare a hunting dog that has gained the favor of Spanish nobility, a dog that is acclaimed in the recent times for the excellent performance in lure coursing and racing competitions, the dog that was mentioned in the first paragraph of the famous Don Quijote novel of Miguel Cervantes de Saavedra the Spanish Greyhound.

A Spanish Greyhound may look fragile because of the thin body and the long skinny legs. The muscles of this breed never bulge. Surprisingly, this is a robust breed, very agile and known to have great stamina. The long skinny legs with small paws give the dog an elastic long trot and make the dog nimble footed in negotiating difficult terrain.

A Spanish Greyhound makes a fantastic companion. This is a people dog. This breed would always want to be in the company of people but they do tend to develop an attachment to a single member of the family. The Spanish greyhound is both an active and a lazy breed – active while hunting but peaceful at home. This breed has a cat like demeanor, content to lie in the couch all day as long as the master is nearby. This breed though is not for everyone. A Spanish Greyhound is more sensitive than any other breed. The dog would not respond to harsh treatment. Prospective owners are encouraged to know the temperament of the breed before opting to bring one home.

The long narrow head, the rose shaped ears, the fragile looking lean body as well as the long thin legs are the hallmarks of a Spanish Greyhound. This is a large breed weighing from 44 to 70 pounds and measures approximately 29 inches at the shoulders. This dog has pink colored supple closely fitting skin. A Spanish Greyhound may have a fine short coat or a semi-long coat that is quite hard to the touch. Short, fine and smooth coat covers the body though slightly longer hair grows at the back of the thighs. Dogs with the longer and harder variety of hair grow a beard and a moustache. The dog may also have longer eyebrows and may sport a topknot on the head. Coat can be of any color though the most common are brindle, fawn and flecked black.

A Spanish Greyhounds tiny round head that leads to a narrow slightly arched muzzle is proportionate to the long lean body. Compared to the head, the dogs small almond shaped brown eyes may appear to be unaccountably large. The close fitting dark pigmented eyelids give the dog a calm soft and reserved expression. The nose is small, moist and black. The set on high ears are rose shaped when the dog is at rest and semi pricked when the dog is attentive and alert.

The dogs rectangular body may look fragile because of its leanness. A Spanish Greyhound however, is a robust breed, one that is extremely agile and known for its strength and endurance. The dogs back is long and straight. The chest is neither broad nor deep and the ribs are visibly marked. However, the dog exudes power and strength. The low set tail has a strong base, progressively tapering to a fine point. The very long tail hangs down sickle fashion with a hook at the end when the dog is at rest.

A Spanish Greyhound is known to have a serious temperament. This is not a boisterous breed. This dog can be very reserved at home. The lively and the energetic personality will only surface when the dog is doing what it was primarily developed for to hunt.

The Spanish Greyhound may be a passionate hunter but this breed is favored by non hunters because of its sweet and well balanced personality. This is an easygoing breed. Calm and peaceful at home and obedient to the human family especially to the person it considers as its master. The dog can be reserve with unknown people but they very rarely show an aggressive behavior. Some individuals will announce the presence of strangers by barking but most Galgos would tolerate strangers.

These are people friendly dogs, loving towards the family and very gentle with children. However, this dog is not good with very young children given that a Galgos skin can easily get hurt. This breed loves to be in the company of other dogs though the dog can be unsafe for other small pets.

At home the Galgos tend to be calm and les energetic. This dog enjoys being idle, lazing and sleeping a lot. However this does not mean that a Spanish Greyhound would do in an apartment. This breed dislikes to be cooped in a small place. A Galgo is not suited for outdoor living. An ideal environment will be a home that has a well fenced yard. This breed would require extensive exercise. The dog would appreciate an opportunity to run without the restriction of a leash.

The Spanish Greyhound is a clean dog. The breed is known to have no doggie smell. Frequent bathing will not be necessary for this breed. The short sleek coat does not need extensive grooming. Regular brushing will remove dead hair and keep the coat shiny. Take care not to brush the coat too vigorously as a Galgos skin tears easily.

The Spanish Greyhound is a very ancient breed of dog. It was believed that this breed is related to the Ibizian Hound as in Spain, the dogs country of origin it is otherwise known as Galgo Espanol. This name was derived from the Gauls, a Celtic tribe known to have inhabited the Iberian Peninsula as far back as 400 to 600 B.C. The name of the breed may also come from the Canis Gallicus which means Celtic dog. The Celtic tribe brought with them their dogs when they migrated to the Peninsula. It was inevitable that these dogs will be crossed with the dogs of the traders who did business with the Celtic tribe.

Even during the ancient times, the Galgo Espanol has gained enormous popularity. This breed is most valued by the Spanish nobility for its great hunting capability. The Spanish Greyhound is also noted for being a dependable guard dog. This breed has gained appreciation even from non-hunters as it has also excelled in agility competitions and in coursing and racing. Over the years, it is most likely that the Galgo Espanol was crossbred with other sighthounds resulting to the Galgo Espanol we have today. In Spain, these dogs are used to hunt hares and rabbits. Unfortunately, some of these dogs come to a horrific end. After the hunting season, a lot of Galgos are abandoned. Dogs that have not performed well were killed. This practice of killing hunting dogs is known as piano player in Spain. The dogs are hanged on trees with the feet barely touching the ground so that the dog would frantically scratch the ground and die a long drawn out death.