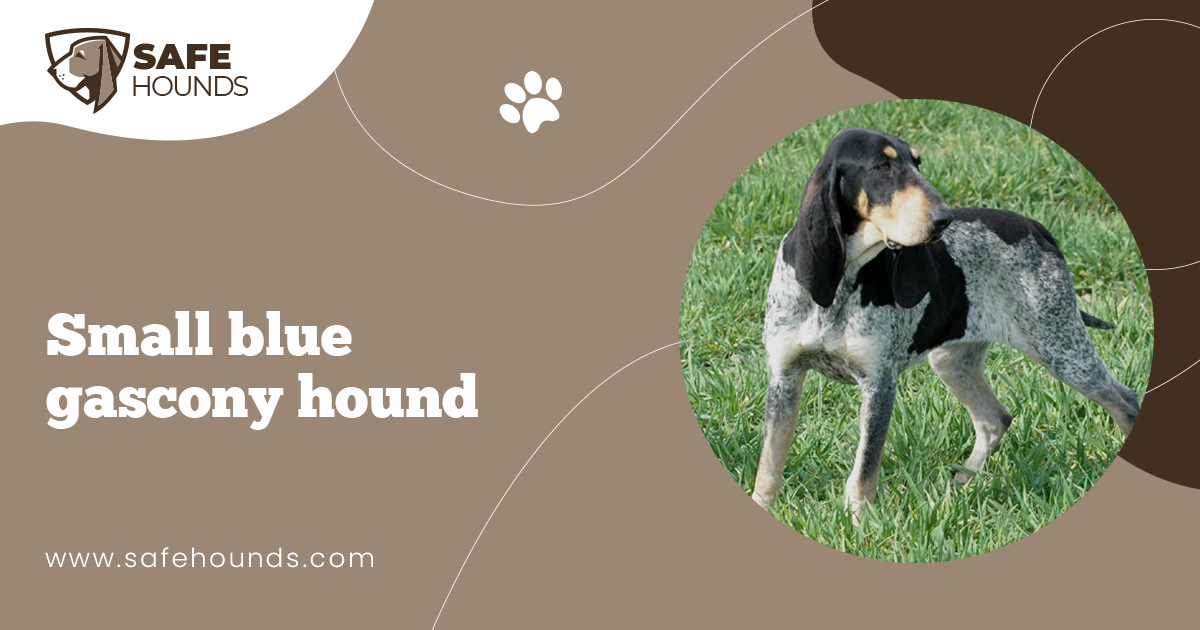 The Small Blue Gascony Hound was developed in France during the Middle Ages when breeders were able to reduce the size of the Grand Blue Gascony through selective breeding. The Grand Blue de Gascogne has a legendary ability to hunt deer and wild boar. However, the breed has a rather ponderous gait. The purpose of the downsizing is to create a dog that will be utilized to hunt smaller game. The petit is faster but it has all the excellent scenting and tracking ability of its cousin the Grand Bleu. Although the Petit is rarer than the Grand Blue, it is most valued as a hare hunter in the Gascony Province, on the southwestern coast of France. This breed has a superb nose. It possesses great endurance and a tremendous amount of determination to follow the faintest of scents. These are versatile dogs that hunt equally well singly or in packs. The Petit alerts the human hunter when a prey is found with its beautiful voice. The Petit still functions as a gundog. The dogs are utilized in hunting hare, deer and wild boar. But more and more Petit Bleu de Gascogne are found in households and performing another role that of being the loyal, affectionate and devoted pets. Serious and tenacious when hunting, and shows agility and endurance in covering vast tracts of land to follow a prey, the Petit shows an easy going nature in the company of its human family.

This breed makes an excellent pet as it is calm, affectionate and forms a strong attachment to the master. A Petit may be devoted and be very loyal to one person but it is friendly to the whole family. Being a hound, the Petit can be rather stubborn and would have a tendency to be willful and ignore commands. A confident handler is necessary to train the dog. Firm training using positive methods must be conducted at a steady pace.

Due to the rather restricted gene pool, breeders have carefully chosen the foundation stock. Rather than for the physical attributes, foundation stocks were picked out for the working ability. Selective breeding has made the Petit a breed with few health conditions. The Small blue Gascony Hound has an average life span of 10 to 12 years.

The Small Blue Gascony Hound is a medium sized dog whose well proportioned, compact and muscular body gives it a distinguished appearance. The dog has a slightly domed skull and a slightly accentuated stop. The muzzle that is of the same length as the skull is strong. The nasal bridge slightly arched. Oval shaped brown eyes have a gentle expression. Large black nose has wide opened nostrils. Fine ears curl in and should at least reach the extremity of the nose. Teeth have a regular scissor bite.

Measured at the withers, the dog stands from 20 to 23 inches and generally weighs from 40 to 48 pounds. The firm back is well supported, the forechest is broad, and the long chest let down to the level of the elbows. The ribs are gently rounded. Slender tail that reaches the point of the hock is usually carried in saber fashion. The powerful well boned forequarters and the well proportioned hindquarters allow the dog to have a regular easy gait. A Petit has supple skin that is either black or appears to be marbled because of the black patches on white skin. The skin is well covered with short dense hair. Mottled black and white hair gives this breeds coat a slate blue color. The most common markings of a Petit are the black patches on either side of the head. These markings usually cover the ears and the area around the eyes. Some specimens may have a small black spot on top of the skull. Tan markings are found above the superciliary arches of the eyes. The cheeks, lips, inner part of the ear, the legs and the tail may have traces of tan as well.

The Small Blue Gascony Hound is a friendly sociable dog. Used to hunting in packs, this breed gets along well with other dogs. This breed that has a muscular appearance has a gentle soul and a notable sense of humor. The dog makes a gentle and patient playmate of the children. Although friendly with everyone and less territorial than other breeds, the dog will not fail to alert the family to the presence of strangers and intruders.

The Petit Bleu de Gascogne may do well in an apartment as long as long as the dogs exercise requirements are met. These dogs are inactive indoors. It would not be uncommon to see the dog lounging on the couch all day. The breed has high energy levels and would need regular vigorous exercise. This dog would be a good match for an owner with an active lifestyle. The dog would appreciate regular jogging and hiking jaunts. Busy owners would have to provide the dog with a large yard where the dog can expend its excess energies.

The Small Blue Gascony Hound does not need extensive grooming. The short smooth coat is easy to care for. It would only need regular combing to keep the natural glossiness of the coat. Some owners include a small amount of boiled linseed to the feed of the dog to enhance the gleam and the black and tan color of the coat.

The Small Blue Gascony Hound, a medium sized but well proportioned scent hound is a breed that was developed in the Gascony region of France. This breed has an ancient lineage as it is believed to have descended from the Gaul and Phoenician scent hounds. This breed was the result of the reduction in size of the Grand Bleu de Gascogne, a breed that has been around since the Middle Ages.

Gaston Phoebus, the Count of Foix imported Saint Hubert Hounds from the Ardennes to Gascony during the 14th century. The Saint Hubert Hounds were crossed with different scenthounds and the Grand Bleu de Gascogne was developed. This breed of extraordinary beauty and notable stature was given the title The King of Hounds for its excellent scenting ability and for its passion to hunt. With its melodious voice and tenacity to hunt, the grand Bleu de Gascogne has a legendary reputation of bringing down wolves and wild boar. Henry IV was known to keep a pack of this outstanding scenthound. There are several varieties of Blue Gascony Hounds and one of these is the Small Bleu Gascony Hound.

As the name suggests, the Petit Blue is the smaller version of the Grand Bleu. Through selective breeding, the Grand Blue de Gascogne was downsized and resulted to the Small Blue Gascony Hound. The Grand Blue is a methodical and tenacious hunter but it has a rather slow gait. The purpose of the downsizing is to create a more compact and lighter boned breed that will be utilized to hunt small quarry. Breeders were successful in creating the Petit Blue. The dog has a compact body and a more refined head but the dog still possess the excellent scenting ability and the passion to hunt of the Grand. The breed that was developed is a multipurpose hound. It hunts with the gun, alone or in packs and has the hare as its main quarry but it has a remarkable talent of hunting big game as well. On a hunt, the dog would meticulously track its quarry and when it is found, it would inform the hunter of the quarrys location with its deep melodious bay.

The first breed standard was developed in 1920. As with other ancient breeds, the Petit Bleu de Gascogne was on the road to extinction. In 1974 only two dogs were registered in the Book of French origin. Breed enthusiasts located some specimens from the rural areas. The remaining specimens of Petit Blue de Gascogne were used in reviving the breed. In 1985 more than 100 hundred entries were made in the book registries.