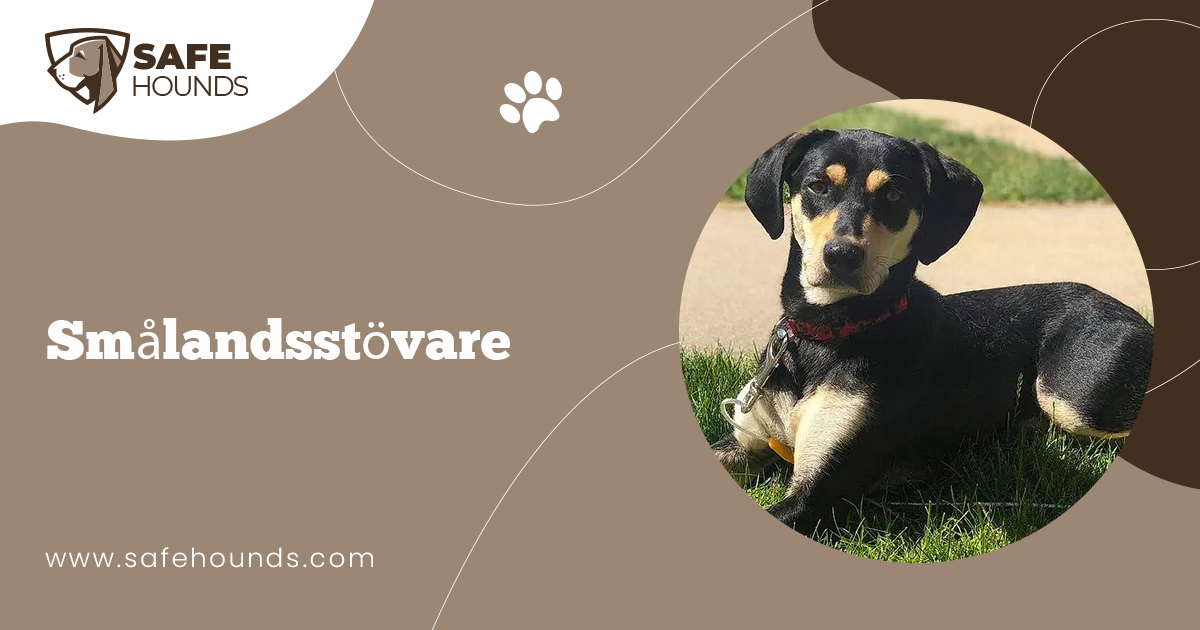 The Smålandsstövare is a breed of scent hound that is believed to be the oldest breed of dog indigenous to Sweden. This breed took its name from the southern province of Sweden where it was originally developed. This breed has existed in Sweden since the 1500s although it was only recognized by the Swedish Kennel Club in 1921.

A Smålandsstövare is a noble looking breed. The sleek black coat and the tan markings are typical to that of a Rottweilers. A Smålandsstövares body is rather cobby but compact and strong indicating ancestry from Nordic type dogs. Smaland Hounds are born either with long or short tail. However, short tails are more common in todays breeds. It is believed that this trait was created by a Swedish breeder by the name of Baron Fredirik von Essen.

This breed is a remarkable hunter. Used to hunting singly, the dog will tirelessly hunt until the human hunter calls it a day. This is a versatile hunter. The dog would hunt feathered and furred game but it is considered as a hare and fox specialist. This breed has an unparalleled sense of smell. Unlike other breeds of hounds that would only show the hunting prowess if hunted in packs, this breed works alone. Add to this is the fact that a Smaland Hound will never be deterred by foul weather and difficult terrain to follow its quarry. In southern Sweden the Smålandsstövare is highly esteemed as an excellent hunter but this breed makes an excellent companion as well. This is a very adaptable breed. Energetic and tenacious when hunting, this breed will be calm and laid back when in the company of the human family. The dog is affectionate and obedient as well. This breed though would show its independence when it has found an interesting scent. This independence will also be manifested at home. This loyal and obedient dog can be stubborn at times. As with any other breeds, obedience training and socialization is necessary.

The Smålandsstövare, the oldest scent hound of Sweden is often incorrectly distinguished as a Rottweiler because both have the same coat coloring. This breed that was developed in Smaland is an elegant breed in spite of the fact that it does have a robust and strong body. The medium length top coat is harsh though the short undercoat is soft and dense. The coat is close fitting. The back and the neck are covered with coarse hair. The hair on the head, on the ears, on the front of the legs is smooth and short. Longer hair grows on the rear of the thighs and the underside of the tail. Toes and pads are well covered with hair. This breed has an attractive black shiny hair with well defined tan markings. The tan coloring ranges from shades of amber to reddish brown. Some specimens have white markings on the chest and on the toes.

Ideally, a male Smalansstovare should measure from 17 to 21 inches and a females height should range from 16 to 20 inches. Weight is from 33 to 44 lbs. This breed has an almost square body. Compact body is strong though never heavy. The withers are well defined. The back is short but it is powerful. Muscular loins are slightly arched and the well developed chest has well sprung ribs. The belly is slightly tucked up. This breed can either have a naturally short tail or a long tail. This breed is the only scent hound with a bear tail. The long tail that barely reaches the hock is set on in line with the back and hangs down either straight or curved in saber fashion. The Smålandsstövare has well laid back muscular shoulders and strong boned forequarters. Strong and parallel hind quarters have well developed thigh muscles.

This breed has a lean skull that broadens between the ears, a well defines stop and a well developed muzzle. The straight bridge of nose ends to a black nose with large nostrils. This breed has lean cheeks, well developed jaws and teeth that meet in scissor bite. Dark brown eyes have a calm expression. The ears are set on fairly high, have rounded tips and hang flat. If the dog is alert the ears are raised slightly.

Smålandsstövare is a Swedish hunters first choice for a hunting dog. This breed forms a strong attachment to its master. Very loyal and loving, this dog makes a wonderful companion as well for an active individual or for the family. Wary of strangers and known to be very territorial, this dog would make good watch dog as it would never fail to announce the arrival of unwanted visitors. This breed would do well in a family with children as the dog is gentle and known to have a protective nature. Highly intelligent, these dogs are capable of learning impressive tricks. A Smalandhound would be good with other dogs only if they were raised together. This breed must be introduced to other dogs and other pets. This breed though is not for everyone not for an owner that do not have enough time to devote to the dog. This breed needs a lot of space as it has high exercise requirements. This breed is not suited for apartment living. The dog enjoys the outdoors playing fetch with the kids, jogging and hiking with the master. A Smålandsstövare that is not given enough exercise will be a destructive dog.

A Smålandsstövare has a low maintenance coat. The short coat would only need a once or twice a week brushing to maintain its good condition and to bring out the impressive gleam. Bathing is not really necessary unless the dog has rolled in obnoxious smelling things. The ears though would need to be regularly cleaned and checked for ear mite infestation. Teeth must be cleaned as well and the nails regularly trimmed.

The Smålandsstövare is considered as the oldest breed of dogs in Sweden. This breeds origin can be traced back to the 16th and 17th centuries. Although unsubstantiated by existing records, some dog experts even believe that the breeds ancestors go as far back as the Middle Ages. The Smålandsstövare also known as Chien de courant du Smaland and Smaland Hound took its name from Smaland, a province in southern Sweden. Varieties of hounds existed in this historical province. Eastern Europeans hounds were brought home by soldiers returning from the great wars (1611-1718). Polish, Baltic, German and English hounds were crossed with native spitz type farm dogs. These dogs became the foundation of the Smålandsstövare. The dogs have evolved from the dogs kept by farmers in small homesteads. As the poor farmers can only afford to feed one dog, these dogs have developed excellent skills to hunt forest birds, hares, squirrels, foxes and even bigger game like elks.

The Smaland Hounds are most commonly found in Jonkoping and Huskvarna counties of Smaland. During that time the dogs come in different sizes, coat colors as well as in length of tail. White markings are more common but coat color ranges from black, tan, red and yellow. Some Smålandsstövares are born with short tail. Selective breeding was started in the 19th century. Infusions of foreign blood were made to strengthen the breed and also to restore the old Smaland Hound. This breed was recognized by the Swedish Kennel Club in 1921. Also during this year, the first standard for the breed that allows both the long tail and the naturally short tail was drawn. It was also decided that the color of the breed would be black and fire but the white marks as well as yellow and red coats will be accepted. Tail docking is not permitted for this breed. The Smålandsstövare is the only scent hound with a naturally short tail. This physical trait of the breed was developed by Baron Frederik von Essen who preferred short tailed individuals. Selected short tailed specimens were developed in Jonkoping County.

The final breed standard was confirmed in 1952. About 100 Smålandsstövare are registered yearly by the Swedish Kennel Club but the breed is considered rare and seldom seen outside its country of origin. Present day Smålandsstövare are commonly used to hunt hare. Because of the breeds wonderful temperament it has also evolved into a superb home companion.