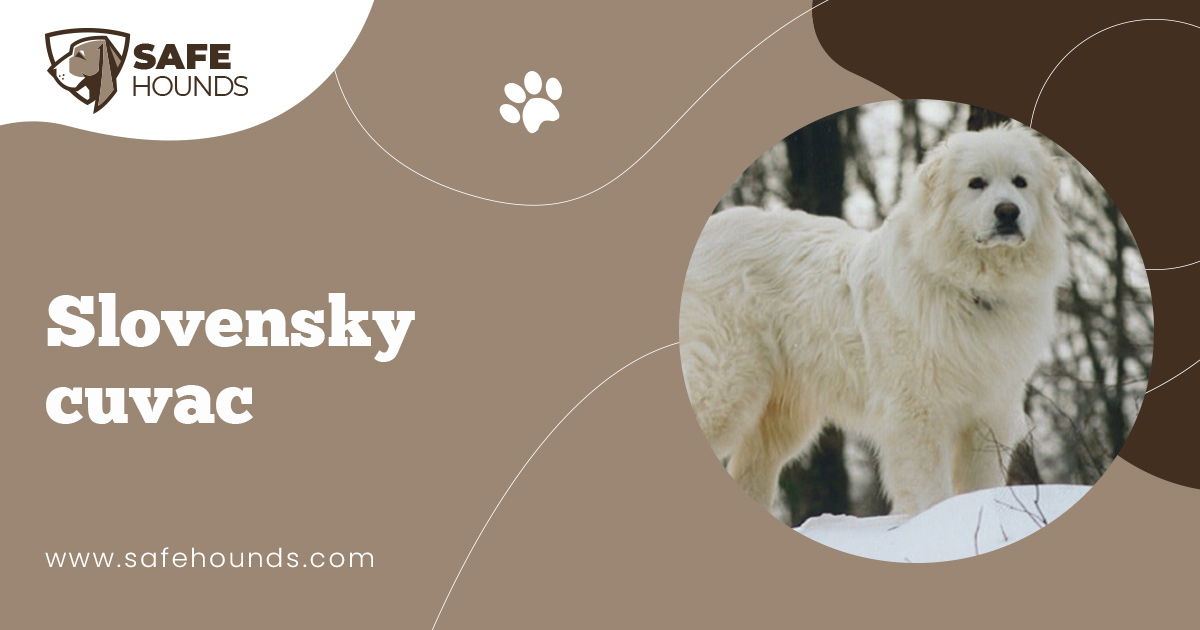 Holiday makers and tourists in the Slovakian mountains would always be attracted by the large white coated dog that stands guard among its flock. This dog sure have an attractive appearance but it is not the only reason why this breed is highly valued by shepherds in the Slovak mountains. The dog is a Slovensky Cuvac considered as the fearless guard and protector of the livestock and the loyal and affectionate pet of the family.

This dog has a massive body that is made even bigger by the thick pure white coat. The big head with its black nose and the expressive oval shaped eyes add to the striking appearance of this herding dog. This breeds origin goes back to the 17th century. A Slovensky Cuvac was originally utilized by shepherds in the European Mountains to protect the herds of sheep from wolves and other predators. The alert and vigilant character of this breed is what earned him his name. Cuvat is a Slovak word that means to hear.

The Slovensky Cuvac is a highly intelligent dog. Owners have enthused about the dogs ability of never forgetting what it has learned. The Slovensky Cuvac is an excellent herder. This is also an even tempered breed that forms a strong attachment to its master. However, this breed is not for everyone as it would need a strong and firm master who will show the dog that he is the leader of the pack. Once the dog is aware that the master is weak it would manifest a dominant attitude. The dog will be pushy, disobedient and will be difficult to handle. This dog is also distrustful of strangers. Socialization and obedience training that is best started at an early age is very necessary for this breed. A well socialized and well trained Slovensky Cuvac will be an asset to the home.

The Slovensky Cuvac is very similar to the Kuvasz although the Hungarian breed is slightly bigger than this herding dog of the Slovak mountains. True to the ancient shepherds tradition, this breeds coat should always be white so that this sheep guard will be easily discerned from predators that normally attack at night. This breed has a double coat. The fine and dense undercoat grows to about one half or two thirds of the top coats length. Except for the hair on the head and on the limbs, the wavy 5 to 15 cm top coat covers the dogs body entirely. On male dogs, longer hair on the neck forms a mane. The longish top coat completely covers the undercoat and although quite long, the thick coat does not form a parting on the back because of the very dense undercoat. A Slovensky Cuvac has an entirely white coat although some specimens may have yellowish shading at the set on of the ears.

The longish skull is strong and broad between the ears. Top of the head is flat although in profile the head would appear to be dome shaped. The straight muzzle is quite broad and tapers towards a black nose that turns to a brown clay color when the colder months set in. Black pigmented lips are close fitting. The dogs palate is also black. Teeth always meet in a scissor bite. Expressive oval shaped dark brown eyes are set in horizontally. Black pigmented eyelids are close fitting. Ears of moderate length are set on high and hang down close to the head. The rectangular shaped body has a straight strong back. The loin is moderately arched, the chest has well sprung ribs and the belly is moderately tucked up. The tail that is well covered with hair is set on low and hangs down when the dog is at rest. On the move, the tail is curled and carried over the loin.

A Slovensky Cuvac is a loving dog that enjoys being around its human family. And if you have children in the house, this dog would definitely be a good choice. A Slovensky Cuvac loves children. The dog makes a good guardian and playmate of the kids and would tolerate the rough handling of the children. A Slovensky Cuvac though is known to be dog aggressive and will only tolerate other dogs if they were raised together since puppyhood. This dog is not a good choice for an apartment dweller. This breed has to be provided with an opportunity for vigorous exercise otherwise the dog will be destructive and may have chewing and digging problems. Dogs that are kept as pets would do best in a home with a fairly large yard where the dog can expend its excess energies. The dog would need to be taken on daily long walks as well. The Slovensky Cuvac though would appreciate a home in the country or in a farm where there are children and where the dog will be tasked to take care of other animals.

This breed would require extensive grooming. The Slovensky Cuvac is not a suitable choice for a busy owner as much time and effort will be needed to keep the good condition of the coat. Because of the very thick hair, daily brushing would be necessary to keep the coat clean. A Slovensky Cuvac sheds heavily during the spring. During shedding season, aside from the daily brushing, the dog must be bathed frequently as well. This is to hasten the shedding process and to ensure that the home will not be decorated with the dogs shedding.

The Slovensky Cuvac is a very ancient breed. Since ancient times, these dogs have been herding sheep and have been living with the people in the Slovak Mountains. The Slovensky Cuvac, a breed of white coated mountain dog is believed to have been derived from the arctic wolves that have existed in the mountains of Asia and Eastern Europe. This theory was verified by the pre-ice age remains of these dogs found on the edge of glaciers of European mountains. The Slovensky Cuvacs existence was documented way back in the 17th century. These herding dogs were of utmost importance to the people living in the Slovakian Mountains. The Slovensky Cuvac, the sheep, the Huzul horse and the mountain inhabitants form the basic requirements of a Slovak alpine farming. The Slovakian mountain people are basically free people that are not controlled by forced labor. These mountain people have helped in defending the frontiers and are only required to pay their dues in the form of sheeps cheese. Thus the dog is a very necessary appendage of the Slovakian shepherd. This dog is a dependable livestock guard that protects the animals from marauding wolves and vicious bears. Aside from herding, the dog also guards the other animals and the property of the master. In its country of origin, this breed is also known as Slovakian Chuvach. The name was derived from chuvatch, a Slovak word that means to hear. Forever watchful and alert, the dog is capable of protecting not only the animals but the master, his family and properties as well.

A white coated dog among the sheep is an ordinary sight in the pastures of the Slovakian Mountains. Because of the impressive appearance, the dog was noticed by holidaymakers and tourists that frequent the area to buy cheese and other products from the farmers. Dogs were purchased and carried to the lowlands. However, when the wolves started to disappear from the European mountains and when modern herding methods were introduced, this excellent herding breed fell to disuse. Breed population greatly diminished up to the point when the Slovensky Cuvac is almost extinct. In the 1950s, the remaining specimens that were taken to the lowlands were bred carelessly.

Present day lovers of the breed have to thank Dr. Antonin Hruza as if not for him, this wonderful breed may now be a relic of the past. Dr. Hruza set up a program that will revive the breed. After the World War 11, a strict and planned breeding program was instituted in the Brno School of Veterinary Medicine. The revival of the breed was started on June 4, 1929. The foundation for the revival of the breed came from Liptovska Luzna, Kokava and from Rachov of the Carpathian. In 1933, the Club of the Breeders of the Slovak Cuvac was established. In 1964, the written breed standard was approved by Dr, V, Kurz. The breeding program was revived and in 1969 the Slovensky Cuvac was internationally recognized.