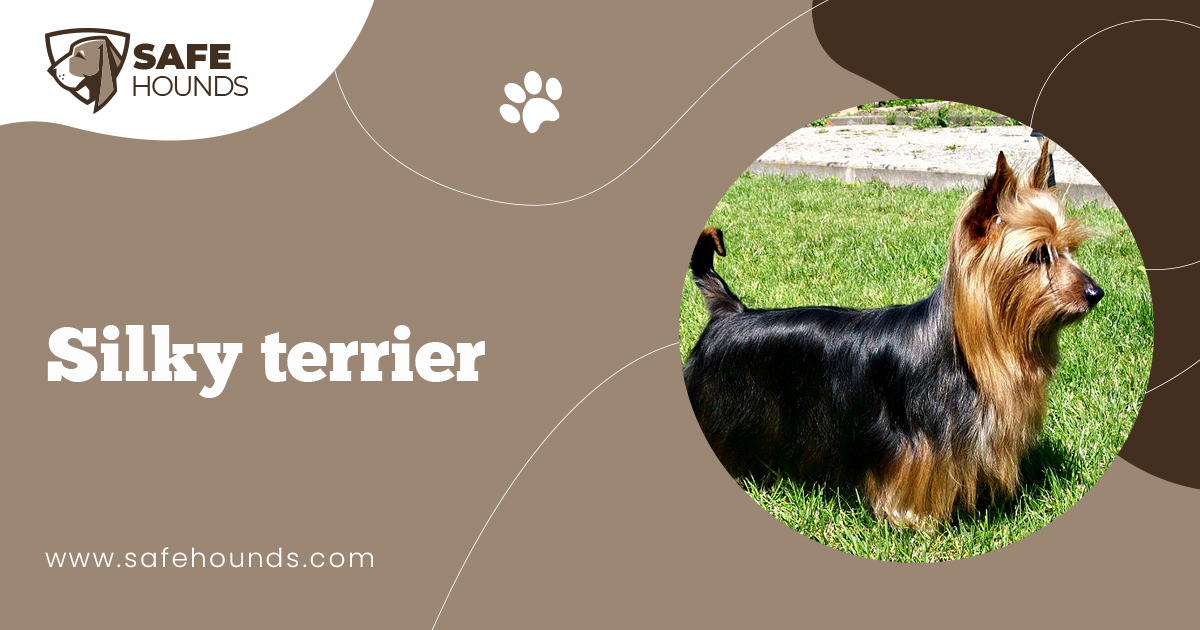 This is a true toy breed being low to the ground and tiny. Do not let their size fool you, they will hunt and kill their prey. His joy for life makes the Silky Terrier an ideal pet. These little bundles of joy have the muscular strength of a much larger dog. They do not think they are smaller then other dogs either.

If you want a Silky for your pet, you must be willing to give a lot of attention to them, as they do not like to be left alone or ignored. They act as if you have a two or 3 year old in the house. If they find their own entertainment, you may not like what they find to do. They can be little troublemakers as well as a loving little pet.

They are not a hyperactive breed but they do love to play and fetch things with you. They love to be by your side when going on walks because they love being involved with the family. You do something then they want to do it with you.

Many people think they are Yorkies when they first glance at them because of the close resemblance to them. They are actually very different and have been referred to as the Sidney Terrier.

They have long hair and erect little ears with a docked tail. Their nose and eyes are always black with a deep expression to them. They have a sturdy jaw with the known scissor bite that is compact to this breed. They have small feet almost like a cat and well padded for walking.

The Silky is a toy breed standing at only 9 to 10 inches tall and weighing only 8 to 11 pounds. The females are a bit smaller in size. The coat is usually blue and tan or has gray with darker ends and some have silver blue top knots. The length is usually around 5 to 6 inches in length. You do not want a Silky that shows any signs of curl to their coat, especially if you intend to show this dog. You want straight silky looking hair.

Their heads are tiny and shorter from the tip of the nose to their eyes than from the same position to the back part of the head. You want a flat head without any fullness. You want to make sure they have a black nose. If showing, you do not want any hair over their eyes what so ever.

Their eyes should be tiny, round, and no bulge to them, shiny and full of expression. Their ears are to be a v shape and set high up on the head without any long hair.

Their body should be longer than it is tall and level across the back. If you have a roach or a dip this is considered a serious fault in the ring. They prefer the tail not docked and set high on the hindquarters and carried erect but not curved over the back.

They should have a movement without slack and no turning in or out of the feet when walking. There should be no hair on the knees to the hocks and then down to the feet.

This breed is very intelligent and has the courage of a German Shepard. They are a very spunky little dog and a lot of fun. They like to be close to their owner and hate being left alone. You do something they want to be right next to you as you do it.

They are very curious when they are snooping around and they love to dig with gusto. So do not leave them locked up in a pen where they can dig out. They will find you if you do.

These dogs are very good with kids if they are raised with them. If not they tend to be snappish to children if they are rough-handled by them. They are great little travel dogs and they will make an excellent watchdog for you, but can be a barker if not controlled.

They are shy around strangers and will hold them at bay until they know they are friendly. They will be fine around cats if they are raised together, but will chase them when they are older.

They will be excellent apartment dogs and will be active indoors so they do not need to have their own yard.

You need to keep them brushed, as the fur will mat very easily. You should also bath them regularly to keep the coat nice and shiny. Being his owner, you will have to be committed to taking care of this coat and brush them at least 15 minutes a day. Make sure you dry them thoroughly so they stay warm. You will need to trim the coat regularly to keep it nice looking. The coat is odorless and non-shedding.

The Silky Terrier came from other breeds such as the Skye and Cairn but mainly the Australian Terrier during the 19th century in Australia. In the late 1800s, Yorkshire Terriers came from England and were bred with terriers already there. This is where the cross breeding came in. They did this to improve the coat. Since the Yorkshire Terrier and the Australian Terrier already had there own class, this brought up the issue of where to put this new breed. They looked like both the parent breeds but had their own image. They came up with the Silky and this was not accepted until 1926. They were named Sydney Silky at first then the name was changed to Australian Silky in 1955. This created a club named Sydney Silky terrier Club of America. Then their name was changed to Silky Terrier Club of America just before their recognition to the American Kennel Club in 1959. The standard was not accepted until 1962.

They are far from being a rare breed but it has not gained much popularity among dog lovers. There was a serviceman that brought a Silky home with him after World War II. The Silky Terrier was known for being a fast little guy so they were used to catch the rodents on the ships on the way to America. These days they will still go after small critters running around the yard and if you have a mouse in the house, he will surely get it for you! They are not known to eat them just play around with them until they die. Good thing for you!

The Silky Terrier has grown in popularity since they used one in movies. It seems like every time a dog or cat is in a show everyone wants one. This makes it bad for the dogs when the fad runs its course. They usually end up in pounds. So if you get one make sure it is because you absolutely desire this type of dog instead of going with a fad.