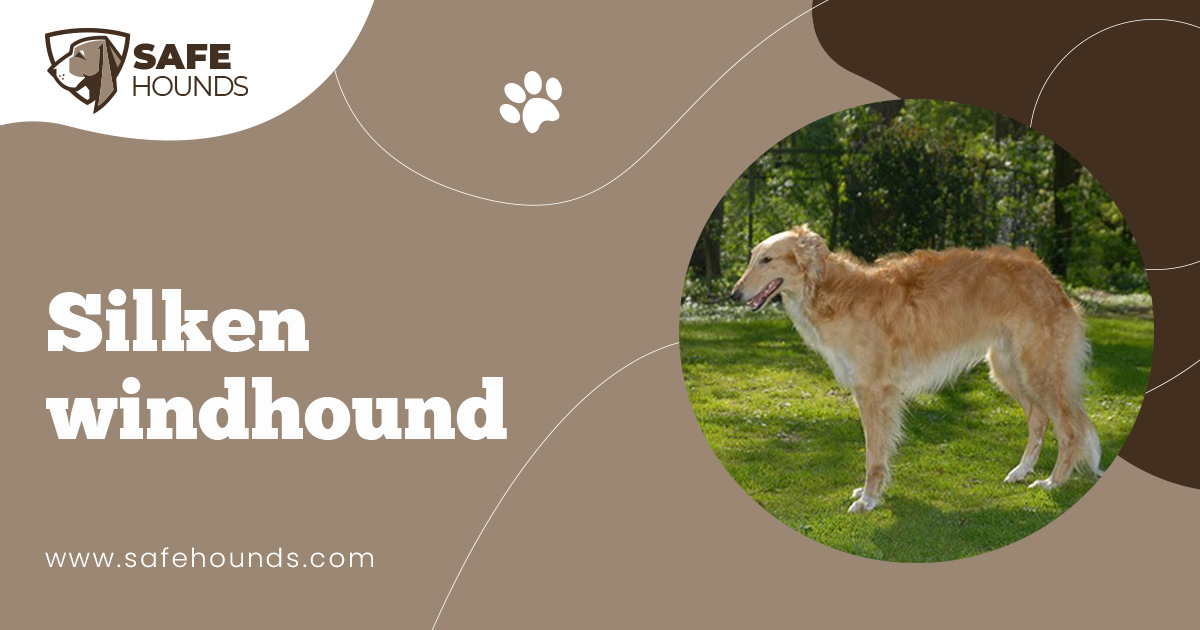 Windhounds are coursing dogs. These swift slim limbed dogs have existed for almost 4000 years. Images of these dogs were seen on the walls of ancient Egyptian tombs. The Borzoi, the Saluki, Whippet, Azawakh and Sloughi are only some of the recognized breeds of windhounds. The Silken Windhound as the name suggests is also a coursing dog. Similar to other breeds belonging to the sighthound group, the Silken Windhound hunts by sight and course game at very high speed.

The Silken Winhound is a fairly new addition to the doggiedom. This breed was developed by Francie Stull, a breeder of champion Borzois. This medium sized breed was developed in the Kristull Kennel. Francie Stull crossed some of her top performance Borzois with a Longhaired Whippet obtained from Walter Wheelers Windsprite Kennel and a Whippet imported from the Kredoni Kennel of Peru. The Silken Winhound was developed a breed that filled the medium sized slot for the sighthound lineup. This breeds appearance is very similar to that of a Borzois. A Silken Windhound actually looks like a young Borzoi but because of the Whippet genes, some differences can be seen. This rather small sighthound that typically measures from 18 to 24 inches has a beautifully colored longish to very long silky hair. This breed has an all weather coat. A highly adaptable breed, a Silken would do well in hot weather, would enjoy the snow and would be ecstatic to splash in puddles. As the name suggests, Silkens would be in its element if allowed to race in the wind.

The Silken Windhound was the realization of Francie Stulls dream of creating a medium sized hound that while possessing the ideal qualities of a sporting dog would also exhibit the temperament of an ideal family companion. Silkens are intelligent dogs that form a strong bond with its family. Owners of this dog may not be troubled with housebreaking as the dog would housebreak on its own as long as it is provided with access to the yard or outdoors. These dogs train easily most especially if positive training methods are used. Harsh training methods would not work well with this breed. Remember, this is not a working breed. A Silken has a short attention span and would be bored with repetitions. These very healthy dogs have no genetic defects. The breed has a live expectancy of 18 years although some individuals can reach the 20th birthday.

A Silken Windhound is a rare breed of American dog that has a striking resemblance to a Borzoi. Apart from the obvious difference in size it would be very difficult to tell the difference between the two breeds. The athletic build and the elastic flowing lines protected by the silky luxurious coat gives the dog an elegant and remarkably beautiful appearance. This aesthetic structure is also very functional as it enables the dog to be a highly capable runner one that is not hampered by difficult terrain and harsh weather conditions. The dog moves in a relaxed and effortless gait. The strong straight forelegs, the well muscled and well angulated hind legs and the well padded and well knuckled feet gives a Silken great reach and immense speed.

A Silken is a beautiful breed. The distinctive hair on the head, ears and muzzle that frames the face enhances the dogs appealing expression. The wavy or curly hair on the back of the forelegs, on the hind legs and the long furry tail adds to the beauty and gracefulness of its flowing movements. The soft silky hair has sufficient undercoat to provide insulation but it does not make the coat bulky and hide the natural outline of the dog. The coat comes in any color combinations and markings. A Silkens coat can be solid white, red, blue, sable or brindled and saddled.

This coursing hound has a moderately long head and a rather narrow skull. The strong muzzle gradually tapers to the nose. Almond shaped rather large eyes have a lively and inquisitive expression. Dark colored eyes are preferred for this breed. Finely textured small ears tightly fold back against the sides of the neck. The long and slender neck is well muscled and slightly arched. This breed has a flat, powerfully muscled and flexible back that easily bends open and shut when the dog is running. Deep brisket nearly reaches the elbows.

A Silken Windhound has a dignified bearing. The dog may appear to be snooty and aloof but to its family, the dog would be very expressive in showing its affection. This dog forms a strong bond with its people. You would think that the dog is attached to its favorite person with an invisible leash. This intelligent breed has an innate desire to please. Its lively, playful and friendly nature makes it a great companion of the children. This breed though would not be an effective guard or watch dog as its friendly nature is extended to strangers. Silkens are people oriented. The dog would love to receive attention even from unfamiliar faces.

Silkens make exceptionally good apartment dwellers as long as the dogs are provided with regular runs at the dog park. This dog accepts other dogs but being a sighthound, a Silken has a well developed predatory behavior. This dog can be a notorious killer of cats and other small pets. A home with a large well fenced yard would be a most suitable arrangement for this breed as once an interesting movement is seen, the dog will immediately sprint oblivious of the threat of oncoming cars.

The straight or curly longish coat of this breed does not require extensive grooming. A weekly brushing will maintain the good looks of the silky hair. Frequent bathing will not be necessary either so as not to deplete the natural oils of the skin. Unlike the Borzoi that blows its coat, a Silken is not a heavy shedder although a nursing or pregnant dog may also blow its coat. The breed is not a fussy eater. Owners usually free feed their dogs.

The Silken Windhound was developed in a ranch in Austin, Texas where Friesian and Caspian horses are also being raised. This sighthound was the realization of Francie Stulls dream of creating a second breed for her Kristull Kennel. Francie has developed Borzoi for years and she has earned recognition for her Borzoi champions. In 1975 she thought of expanding her kennel by developing another breed. The Borzoi is a magnificent breed but aside from the rather large expenditure for top quality feeds, the breed also requires a large space. Francie has very definite requirements for the breed that will be developed. The breed that would be created has to be on the small side. It has to have a well balanced and gentle temperament. A breed with a beautiful silky coat is desired although a coat similar to what a Llaha Apso has would not be ideal for the hot, rocky and often cactus strewn terrain of Texas. Short coat similar to what a Greyhound has would not be ideal either as the family enjoys outings on horseback with their dogs and short coats would be prone to injuries. If not for the size requirement, Francie could have been describing a Borzoi.

In 1984, a small longhaired Whippet-like sighthound was obtained from the Windsprite Kennel owned by Walter Wheeler. The dog was referred to by the breeder as a Longhaired Whippet although through DNA studies it was established that the dog has the genes of a herding breed. This dog, together with another Whippet obtained from the Peruvian Kredoni Kennel was crossed with carefully selected Borzoi from the Kristull Kennel. In 1987, the first litter of the new breed was whelped. The breed name Silken Windhound was adopted in 1988. After years of selective breeding, the medium sized sighthound was developed. The International Silken Windhound Society was formed in 1999. In such a short time, the Silken Windhound has spread throughout the Unites States and in other countries as well. The studbook was officially closed in December 2000. The Silken Windhound is as yet unrecognized by AKC and FCI although ISWS members are working towards the recognition of the breed. These dogs have earned awards in conformation, racing and coursing competitions. Silkens were trained to be service dogs and cancer detection dogs. Francie Stull had realized her dream of developing a gentle and affectionate breed. The Silken Windhounds is one of the most suitable breeds for a house companion.