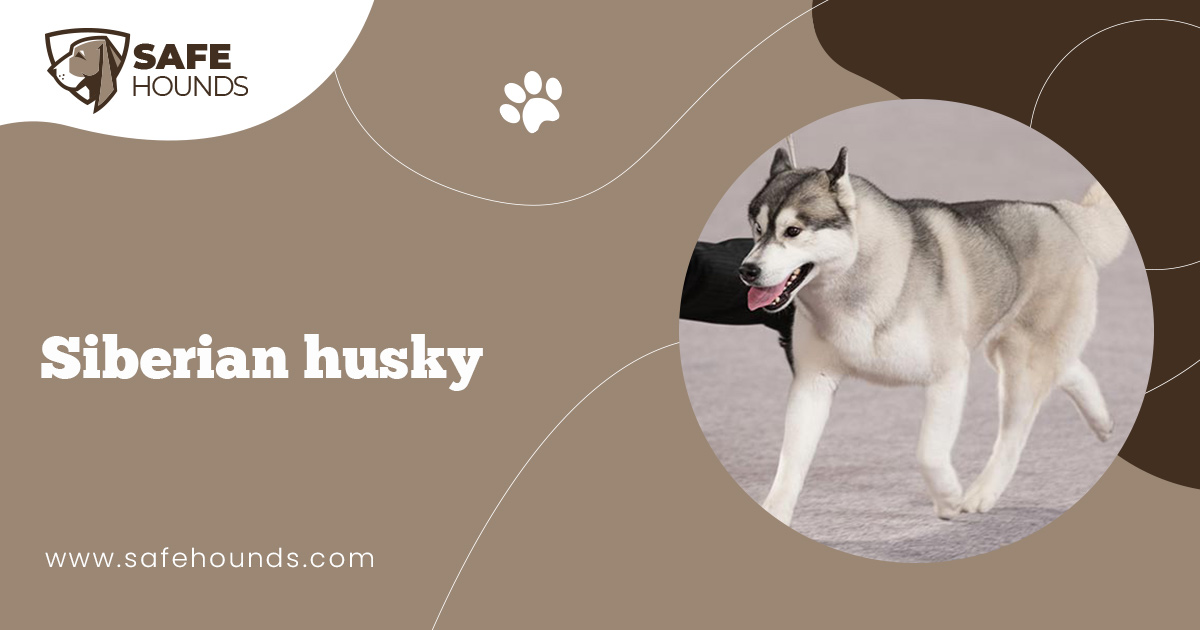 The Siberian husky is a medium size dog that can be recognized by its thick coat and erect ears, but mainly for its eyes. They usually have distinct markings on their fur as well. They came from an extremely cold climate of the Siberian arctic. They were mainly bred to be sled dogs, but now are mainly companions as family pets.

These dogs have many colored coats some being black and white, red and white, gray and white sable and white and a few are plain white. There are several different markings as well, but the most prominent is the pie-bald. This makes the Siberian husky look like a Pinto horse in a way. The mask and belly are usually plain white and the rest of the coat will vary in colors. They have beautiful almond shaped eyes and the most enjoyed are the blue eyed huskies. Not all Siberians have blue eyes like many people believe. Some have brown or black and some have one of each. This is known as parti-eyed. Having one blue and one of the other colors is known as bi-eyed.

They have snowshoe shaped feet to walk on the snow and ice easier than most breeds. They have a thick double coat, the top being the thick wool one and the undercoat is the soft one. The Siberian husky has been known to withstand temperatures of fifty to sixty below zero.

The Siberian is comparable to the Alaskan Malamute and other Spitz breeds like the Samoyed. The Siberians have the masked appearance to the face and have a wolf like appearance even though they are not related.

The markings of the coat are unique as well. They have two layers of coat and the top coat can be two different colors. The most amazing thing is it is not uncommon to see the fur grow white then black then white again. The shedding is done twice a year, which is known by the term blowing their coat. They usually have white paws, tip of the tail and the face. The eyes as stated above are different colors and one of the only breeds that are allowed to have no preference in the show ring so they can have the different colored eyes and blue ones as well. It has nothing to do with them pulling sleds so it is allowed in the ring.

The ears on a Siberian are very erect and they have excellent hearing. The fur on the tail is baby soft. They carry their tail in a curve shape up over the back and they let it trail behind them when they are walking.

The nose on a Siberian husky changes with the summer in some of the dogs. This is referred to as snow nose or winter nose. This is called hypo pigmentation. This comes from the lack of sunlight and causes the nose or part of it to fade to brown or pink in winter. The color usually returns in the summer and mainly happens to the light coated dogs. Sometimes it becomes permanent in the older ones.

The size of the Huskies is 21 to 24 inches and 45 to 60 pounds for the males and the females are usually one to two inches smaller and 10 to 15 pounds lighter.

The wolf like appearance of the Siberian Husky might scare some people, however, they are actually a very gentle breed and have an extremely gentle temperament. Because of their history of sledding and working dogs, they are very energetic and need a lot of exercise. They love to run and explore the surrounding areas. They were usually left to run at night when they were not working so you may expect them to take off and explore on their own.

They are very affectionate and loving to their families. They welcome every one who comes around so this is why they are not very good watch dogs. They are very good with children but never leave a child alone with any dog.

Because they are pack hunters and they have a huge prey drive, it is not a good idea to leave them alone with cats, birds, and other small animals. They have been known to kill them and especially go after deer. However, when worked with from puppy hood with family pets they usually get alone very well and can be raised together with no problems.

It is not recommended to raise them in an apartment but they can live in one if need be. They need room to run and have fun. That is why a big yard is a necessity for them or to live in the country with a large yard.

Their heavy coats make them need a cool climate or give them adequate shade and air conditioning. Make sure they have plenty of water if left outside and a nice shady tree. If you fence them in make sure it is very high and the wire is dug into the ground quit a ways because they will run off or dig out.

The Siberian sheds twice a year and this is know as blowing their coat so grooming is only necessary during these times. Keep the shedding under control with brushing when it clumps up.

The Siberian husky has no smell so bathing is only necessary when dirty. The Siberian huskies live to be about 12 to 15 years old. Therefore, you can enjoy a long life with one if you choose this breed for your pet!

The evidence of exactly where the Siberian husky originated is believed to be from the Coastal tribes of Chukchi of the east-Siberian peninsula. It is said they also came from Koryak and Kamchadal. However, DNA confirms this breed is one of the oldest just like the Samoyed. The dogs from this area were imported into the Alaskan territory in 1908 during the gold rush so they could be used for sled dogs.

A Norwegian fisherman named Leonhard Seppala was asked by his boss to train a group of females and their puppies for the AAS. His first year was not the best but every year since he was a winner.

An epidemic of diphtheria broke out in Nome, Alaska in the winter of 1925. With the only means of contact was by telephone or the railroad, which was 650 miles away, the town doctors made an urgent appeal for help. Seppala received a team of 15 of his dogs together from his relay sled dog team and he went to get the needed medical supplies with this sled team. They could travel up to 50 miles quickly. They met up with the other teams and received the supplies. Seppala and his team traveled over 170 miles in near blizzard conditions. In total, they traveled over 350 miles altogether. This gave Seppalas team worldwide recognition and the Siberian breed was born. Seppalas team of dogs saved many lives.

The following year he had two groups tour the United States. This started the sled dog races.

In 1930, came the first recognition for the Siberian husky into the American Kennel Club and then it was first registered by Canada nine years later. The registered Siberian today is the descendants of the 1930 Siberia imports of Leonhard Sippelas dogs.

It now has become a family pet and show dog. Crossbreeds for dog racing are slowly replacing the sled dogs.