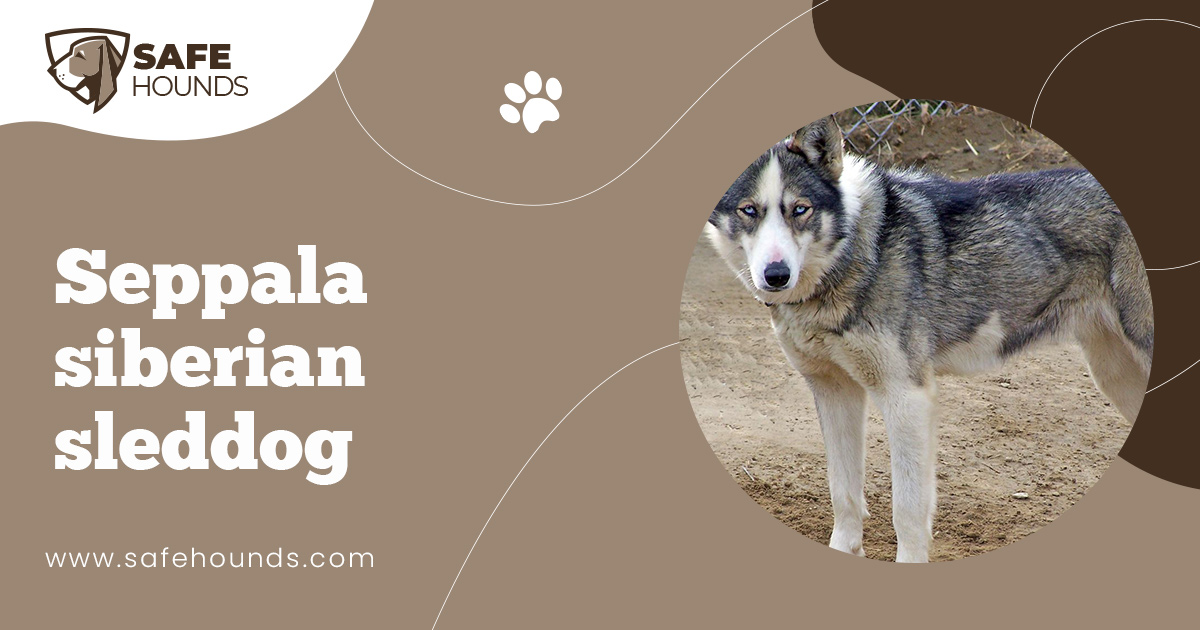 The Seppala Siberian Sleddog is a rare primitive type of working dog. This breed was developed to pull a sled in a cold country. Specifically created to be a sled dog, the working ability and the efficiency were given prime importance rather than the appearance that is most important in breeds of show dogs. The Seppala was developed from imported Siberian sled pulling dogs. Leonhard Seppala, the legendary dog driver was credited for developing this outstanding sled pulling breed. Teams of Seppala Siberian Sleddogs have dominated the All Alaska Sweepstakes dog race for years earning the breed as well as its creator worldwide fame. Although considered to be a separate strain, the Seppala and the Siberian Husky shared a book registry until 1997. The Agriculture and Agri-Food Canada recognizes the Seppala Siberian Sleddog to be an evolving breed thus it cannot be registered. Genetic stability and a required population number must be met before the Seppala can be accepted as a distinct breed.

A Seppala Siberian sleddog is a versatile dog that exhibits strength, speed and endurance the most sought for traits in an outstanding sled pulling dog. This breed has an innate sled pulling ability. Females typically have one heat a year and produce an average litter size of six puppies. Puppies grow rapidly. At 3 to 5 months, the puppies would exhibit a great inclination to pull. These intelligent dogs have an innate eagerness to please thus very little training will be necessary to turn these dogs into serious, well disciplined and dependable sled pullers.

The Seppala Siberian Sleddog is one of the breeds developed primarily to pull sleds. As the Seppala Siberian Sleddog is a working breed, it has no specific or narrowly defined characteristics. As with any other working breed, the working excellence is given preference over physical beauty. This medium sized dog is expected to pull about 100 pounds loads at 18 to 20 miles per hour even in extremely poor weather conditions. Thus a well balanced and well proportioned build is very necessary to achieve agility, coordination and efficiency. A rectangular shaped body is preferred for this breed as a square profile would hamper the ability of the dog to move when the limbs interfere with each other. The solid body should have a deep chest that does not extend below the level of the elbows. Well sprung ribs should be flattened at the sides. The well muscled loins should be slightly arched. A rather long back is desired as it would allow the dog to have an easy lope. Hindquarters should be well boned and well muscled. Brisket should not be too broad or too narrow. A Seppala Siberian Sleddog must have a strongly defined and well balanced front and rear angulations, well bent stifles and well laid back shoulders and upper arms. Legs should be straight and well muscled. The feet will serve as the dogs snowshoes thus it must be on the large side, oval shaped, well knuckled and have tough thick pads.

The medium sized head is proportionate to the body. The medium width muzzle should not be too long and must not appear too heavy. The face of this breed has a well chiseled appearance. This dog has a black nose, close fitting lips and teeth that meet in a scissor bite. Obliquely set almond shaped eyes have black rimmed eyelids. Eye colors range from dark brown, blue, amber and heterochromatic. A Seppala Siberian Sleddogs eyes have a friendly though alert and keen expression. Well furred ears have moderately pointed tips, erect and set high on the head. The medium length neck must be arched.

Thick weather resistant coat is necessary to provide the dog excellent protection against harsh weather conditions. Coat length may vary from medium to moderately long but it has to be very dense, thick and soft in texture. The undercoat that is almost as long as the guard hair gives the dog a smooth and well defined outline. The well furred tail forms a sickle curve and carried over the back when the dog is alert but held low when the dog is pulling. Coat colors vary from white to nearly solid black. Shades of fawn, grey, sable, reddish brown and banded wolf colors also occur.

A Seppala Siberian Sleddog is noted for its commendable and highly developed work ethics. This breed trains easily as compared to other sled pulling breeds. A Seppala has this inherent trait to keep on going in spite of very unfriendly weather conditions and even when sick or injured. This breed forms a strong bond with its master and always exhibits a strong desire to cooperate with the driver. The dog is affectionate, docile and gentle. This breed is commonly used in recreational dog sledding as Seppalas are noted for being people oriented. Never aggressive, the dog would enjoy being petted even by strangers. A Seppala gets along well with other dogs but it should never be unleashed in public places. Because of its high prey drive, it will be dangerous to smaller pets. This breed has an overpowering drive to run. A simple walk in the park would not be enough to satisfy the dogs high exercise requirements.

A full coated Seppala requires minimum maintenance. The weather resistant coat practically cleans itself. Bathing is not necessary for this breed so as not to strip the coat of its natural oils. A shedding Seppala though would be a different story. This is a heavy shedding breed. This breed is definitely not for a meticulously tidy house owner as in spite of the daily application of a stainless steel one inch pin comb, the home will still be decorated with mattress-like stuffing. This breed though is naturally healthy. Well nourished and kept free of parasite, the dog is expected to live as long as 15 years. This breed need small quantities of food but a high quality diet low in cereal fillers and high in protein, Omega 3 acids and rich in fat will be necessary. Low grade food can result to diarrhea, poor coat quality and poor health of the dog.

Dog sledding holidays is one of the most popular winter holidays these days. Being pulled at top speed by a dog sled team while you fly through the snow covered trees and traverse frozen lakes with only the sound of the dogs pattering feet as company would certainly be a one of a kind exhilarating experience. Sled pulling dogs then and now have always been highly valued. However, if present day sled dogs are utilized in this form of recreation, sled pulling dogs centuries ago were highly esteemed by the people in frozen lands as these dogs are vital to their existence. In Northeastern Siberia, the sled pulling dogs have adapted well to the merciless gale force winds and the blinding blizzards in the mountains and frozen tundra. These Northeastern Siberian sled dogs were the ancestors of the Seppala Siberian Sleddogs.

The Seppala Siberian Sleddog is a rare breed of sled pulling dog bred and developed from 1914 to 1931 by the renowned dog driver Leonhard Seppala. Leonhard Seppala was a Norwegian that immigrated to Australia in 1900 during the Nome gold rush. Dogsled racing on the Nome gold fields was a favorite recreation. A team of sled pulling dogs composed of 10 Northeastern Siberian dogs was brought to Nome, Alaska in 1908 by William Goosak, a Russian fur trader. These dogs were disdainfully called Siberian rats because they are smaller in stature as compared to the local sled dogs. Of excellent strength and stamina, the dogs won at the 1909 Nome Sweepstakes race. This feat has generated interest for the breed. Seventy dogs were bought from a Siberian trading village. These dogs have dominated the 3rd All Alaska Sweepstakes of 1910 by bagging the 1st, 2nd and 4th place.

Leonhard Seppala owned a two dog sled team. His sled dogs, Nigger and Jack are heavy weight native dogs. In 1913, Seppala was entrusted by his employer Jafet Lindeberg to care for a team of Siberian Huskies then known as Chukchi huskies. With this dog team Seppala earned a name for dominating the All Alaska Sweepstakes from 1914 to 1917. Seppala became a legend in developing, training and racing Siberian sleddogs.

In the 1925 Nome diphtheria epidemic, Leonhard Seppala became a prominent figure in the serum run. Other relay teams of sled dogs were involved in bringing the antiserum to the stricken city but only Seppalas team has traveled over 340 miles in treacherous blizzard. The Nome Serum Run earned Seppala immense popularity. He established a kennel in Poland Spring, Maine after winning a race in New England. His dogs became the foundation of the Siberian Huskie in Canada. The second Seppala Kennel was established by Harry Wheeler in St. Jovite Station Quebec. Other breeders have taken to developing the Seppala dogs. However, by 1969 the Leonhard Seppala sled dogs were facing extinction. This unique breed was saved from extinction by the Markovo Kennels in Canada and by the Seppineau Kennels in USA.