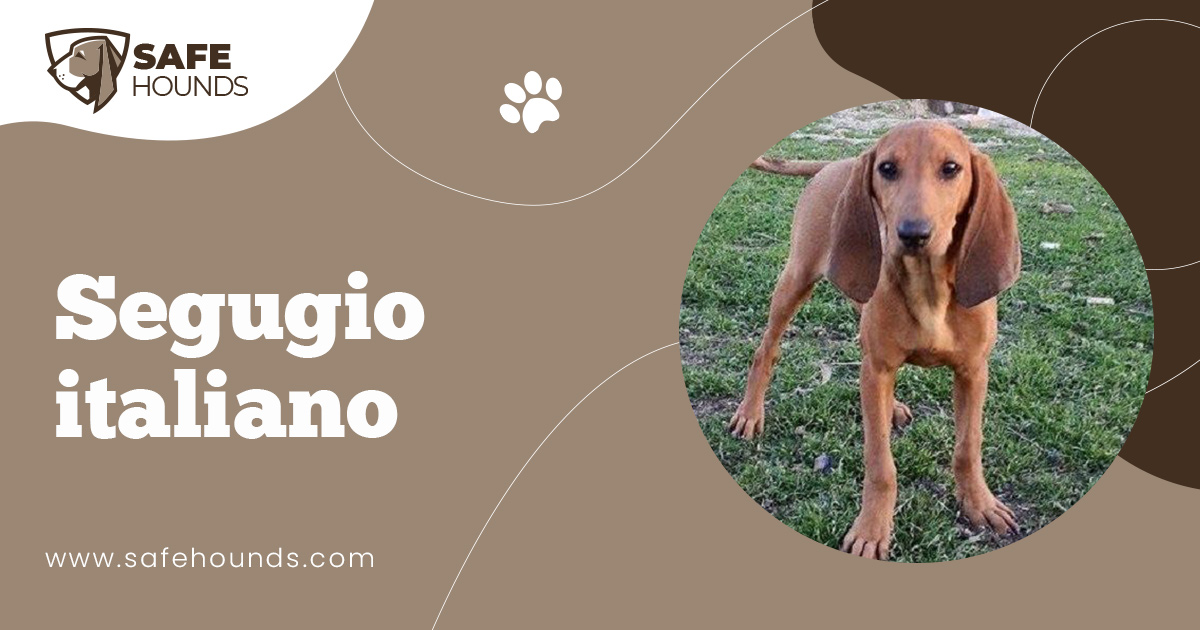 An Italian breed of dog that is highly valued by dog fanciers because of its strong and fast legs typical to a sight hound, a dog that possess the excellent tracking skills of a scent hound  the dog is a Segugio Italiano. Apart from the pleasing harmonious bark this breed is noted for its outstanding appearance as well. Developed from the primitive Egyptian coursing hounds and from the Roman Molussus, this breed was originally utilized to hunt wild boar. However, with the decline of boar population, the Segugio Italiano is now used to hunt hare and other smaller furred game. Known to have fast steel legs the dog can easily pursue fast game. This determined hunter can hunt the whole day without resting and would still have the eagerness to hunt the following day and the day after. This dog can hunt on any type of terrain be it flat country or mountainous areas with heavy vegetation.

The Segugio Italiano or the Italian hound is a handsome breed. This dog has a no fat lean and light boned body. It has distinctly unique long droopy ears that are low set and are folded at the tip. This breed that has an elegant form comes in two types of coats – the wire haired and the smooth haired. Both variants are highly valued by Italian dog fanciers. The Segugio Italiano is an ardent hunter with a sonorous bark. However, because this breed is quiet and docile at home a Segugio makes a suitable home companion. Hounds typically enjoy human companionship and the comforts of home. The Segugio Italiano is no exception. This breed would demand to be treated as a family member and would want to be included in all the activities of the family. This breed should never be relegated to a dog house in the yard or left alone for quite sometime. The dog will be bored and would manifest its boredom by being destructive. Hounds are pretty independent dogs and training can be a quite a challenge. However, with the infusion of the mastiff blood, the Segugio is noted to be more receptive to training.

The Segugio Italiano is a medium sized breed of hunting dog with a lightly built square shaped body. This lean and light boned dog is robust and well balanced. The head is slightly elongated, the skull is oval in shape and the muzzle is about one half of the length of the head. The slightly curved nasal bridge has a large moist nose with well opened nostrils. This breed has strong jaws, black tight lips and white regularly aligned teeth that meet in a scissor bite. Large eyes are oval in shape. Tight black pigmented lids and the dark ocher color of the eyes give the dog a sweet though a trifle sad expression. Long and very wide triangular ears end in a narrow tip that twists slightly inwards. Ears are low set and hang close to the neck. Slightly arched neck takes the shape of a truncated cone. Well set on, the lean and light neck gives the impression that it is not muscular.

A Segugio Italiano has a level topline. The strong straight back is muscular. Chest is well let down and the ribs are moderately well sprung. Set on high, the tail is quite small at the root and has a uniform thickness throughout its length and thins at the tip. The tail that is well covered with short hair hangs down when the dog is at rest and takes the shape of a scimitar and swings from right to left over the back when the dog is in action. The Segugio Italiano has two variants – the smooth and the wire coat. Wire coated dogs have harsh dense coat that grows not more than 5 cm and lies close to the body. The smooth coated variety has thick shiny coat that looks like glass. Coat color ranges from shades of deep red to wheaten to black. White markings may be found on the head, chest, one the feet and on the tip of the tail.

The Segugio Italiano was primarily utilized to hunt. However, years of association with the human hunter has accustomed this breed to human companionship. This breed is lively, affectionate, loyal, sociable and even tempered. Willing to learn and eager to please, this hound unlike other breeds of hounds would be easy to train. Some individuals will be stubborn at times but this concern can be addressed easily with positive training methods that are conducted in short but consistent sessions. This dog makes a gentle playmate and a reliable nanny of the children. This breed gets along with other dogs as well though because of a high prey drive, a leash would be necessary if the dog is to be taken in public places as it can be dangerous to smaller pets. This dog would do well in the county where it will be allowed to run and roam to its hearts content. The Segugio Italiano has hunted for centuries. It is expected that the dog would have high exercise requirements. Apartment living is definitely not for this breed who will annoy the neighbors with excessive barking and would turn into a destructive dog if excess energies are not expended.

Both the wire coated and the smooth coated Segugio Italiano will require minimal maintenance. Weekly brushing will distribute the natural oils of the coat to promote its good condition. Brushing will also remove dead hair. Some owners would add linseed oil to the diet of the dog as it is proven to bring out the lovely sheen of the coat. The droopy ears of the dog would need to be frequently checked and cleaned especially if the dog has been hunting. Pendant ears would be quite hard to air dry. Cleaning is necessary not only to remove foreign bodies such as mites and grass seeds but also to prevent ear infection.

The Segugio Italianos existence can be traced back to antiquity. Dogs of the same appearance are found in Italian works of art done during the Renaissance period. A 1600 painting that featured a dog with the same appearance was found in the Castle of Borso d Este. Dogs with very similar appearance were found in ancient sculptures as well. Diana The Huntress, an ancient statue in the Naples Museum and Diana with Bow and Arrrow, another ancient sculpture that is displayed at the Vatican Museum both have dogs typical to the Segugio Italiano breed. Skeletons of two dogs identical to that of a Segugio Italino were found in a perfect state of preservation in an excavation in the Lombard province of Verona.

It is believed that this leggy hound has descended from the primitive hounds of ancient Egypt. The anatomy of the breed was kept almost unchanged. Designs of dogs during the Egyptian Pharaonic eras depicted pendant eared dogs that greatly resemble the Segugio Italiano. Phoenician traders have brought these dogs to the Mediterranean coasts. These ancient Egyptian sight hounds were crossed with the Celtic hounds of southern Gaul. Later on crosses were made with ancient Roman molossus. Mastiff blood was added to the sight hound blood to improve the scenting ability of the breed. And the Segugio Italiano breed was born!

The Segugio Italiano is a lightly built dog with the long legs of a sight hound and the head of a scent hound. This beautiful breed is highly appreciated by the Italians as it is both a scent hound and a sight hound – the dog trails a quarry both by scent and sight. Grand hunts are common during the renaissance period. The Italian nobility using well appointed horses are accompanied by liveried trumpeters and drummers and hundreds of Segugio Italiano hounds. However, when interests for the grand hunts waned, the dogs fell to disuse. Originally used to hunt wild boar, the dog is now utilized to flush out rabbit to the waiting gun of the hunter. Breed population tremendously declined. Interest for the breed was revived in the 20th century when a Segugio Italiano won the first European Cup in 1933. Due to renewed careful breeding were started. Thanks to the guidance of Societa Italiana Pro Segugio, breed quality was improved. Both the rough haired and the short haired types became popular. The Segugio Italiano is one of the breeds with big population in Italy theses days.